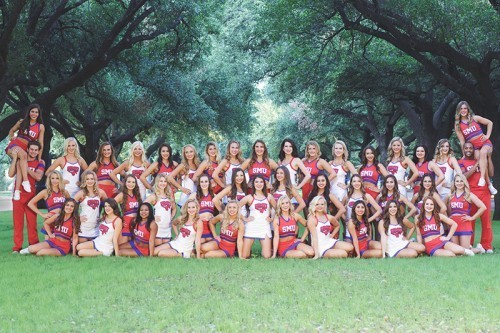 Not only do the SMU Cheer and Pom teams show endless support in Ford Stadium at football games and in Moody Coliseum at basketball games, or even travel with the SMU volleyball team to the NCAA tournament in Austin, but they also compete at the national level themselves.

This year, SMU’s Cheer and Pom teams traveled to Daytona Beach, Florida to compete in the NCA and NDA Collegiate Cheer and Dance championship on April 5-9, 2017.

The Pom team competed in Division 1A, the largest and hardest division in the National Dance Association. SMU Pom placed within the top five teams, finishing fourth overall with a score of 9.2 out of 10. The top five teams finished within .3 of each other.

“Full of hard work and dedication, our road to nationals is both intensely physically grueling and incredibly satisfying. Competing in Daytona has forced me to grow as both an athlete and as a teammate in numerous ways which will benefit me far beyond my years on this team, and for that I am very thankful,” said SMU cheer captain Margaret Bres.

All of the rigorous practices paid off when the SMU Cheer team won their second National Championship Small Coed Division I title in a row. Their back-to-back success is attributed to the hard work and dedication of the student-athletes that make up the team, and the experience and guidance of head coach Tiffany Fettinger.

Fettinger is the head coach of both the SMU Cheer and SMU Pom teams, as well as a coach at Spirit of Texas, a competitive cheer gym in Arlington. The former SMU Cheer captain graduated from SMU after cheering on the Mustangs for four years. She now works with the SMU spirit squads to win more national titles and further Mustang athletic success.