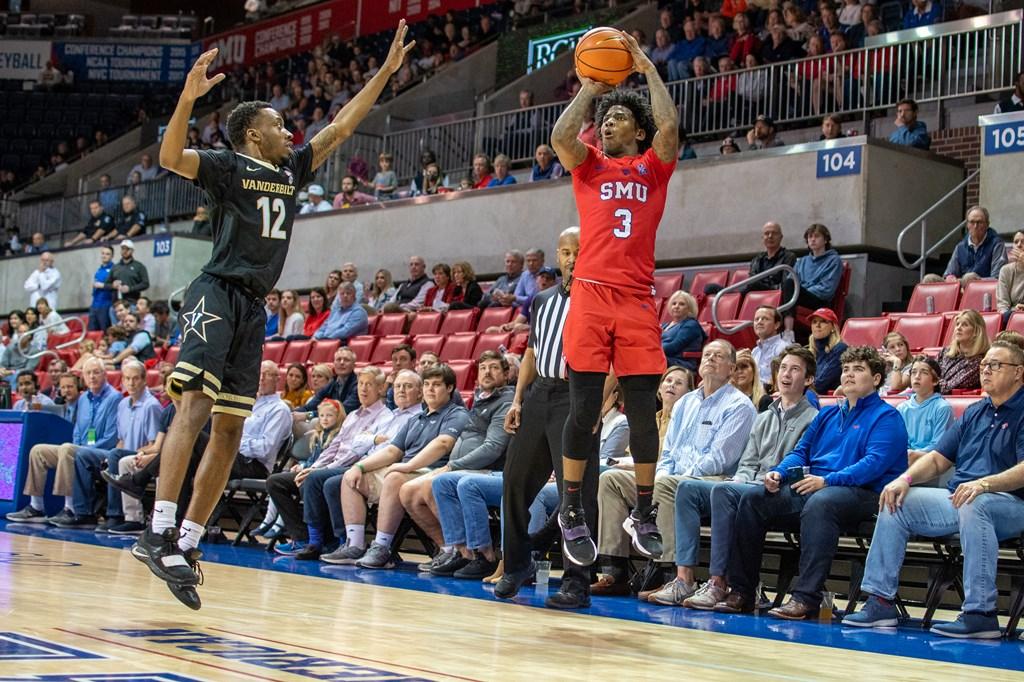 It wasn’t looking great. SMU were down 12 points. Vanderbilt was shooting 51.7% from the field. SMU had made only four of their 20 three-point shots. The half-time buzzer could not come any sooner. Both teams and their staff tricked down the alleys into their respective locker rooms. Something had to change in the second half surely.

And something did change. Whatever was said during the SMU half-time team talk worked. “We tried our tails off in the first half but made lots of mistakes, tried too hard on both ends, and dug ourselves a huge hole. But we didn’t panic”, said SMU Head Coach Tim Jankovich after the game. They sure didn’t panic. Zach Nutall scored a three-pointer to begin the half. Then he scored a layup. Moody roared in support. The deficit was now 7. Emmanuel Bandoumel scored a layup of his own, and two free throws. SMU had scored 11 straight points, and reduced the deficit to the one point.

Speaking on the switch-up at halftime, Tim Jankovich said, “At halftime, we just told ourselves we played terribly but we could win the game. We’ve done it before – at the Monroe game”. SMU continued their impressive form after the break, shooting 63.3% from the field and 50% from three in the second half, before going on to win the game 84-72.

Arguably their toughest game at the Moody Coliseum this season, this SMU team wasn’t let down by the support from the home crowd tonight. Forward Isaiah Jasey commented on this, saying, “Playing at home always comes with an advantage…..we’ve got the whole team and the arena on our side”. Now with only three non-conference games left this season, SMU are still yet to lose a game at home in Dallas, and boast a 7-0 record at Moody. SMU has also won 28 of their last 32 games at the Moody Coliseum.

This is the second game in a row where SMU has fielded the same lineup of Jalen Smith, Kendric Davis, Emmanuel Bandoumel, Zach Nutall and Isaiah Jasey. Team Captain Kendic

Davis scored 21 points and added 3 rebounds, 5 assists, and a season-high 5 steals on the night.

Davis has now scored 17+ in 9 of 10 games this season, and is averaging 20.2 points (3rd AAC) and 5.7 assists (1st AAC). Guard Zach Nutall lit up tonight with multiple highlight plays, and finished with a season-high 20 points, 2 assists, and 5 rebounds.

With the American Athletic Conference season looming large, this SMU team is really getting themselves together to begin the important campaign, and wins such as this one only gives the team more confidence. SMU plays their next game against Dayton on December 8th, at the Moody Coliseum in Dallas.