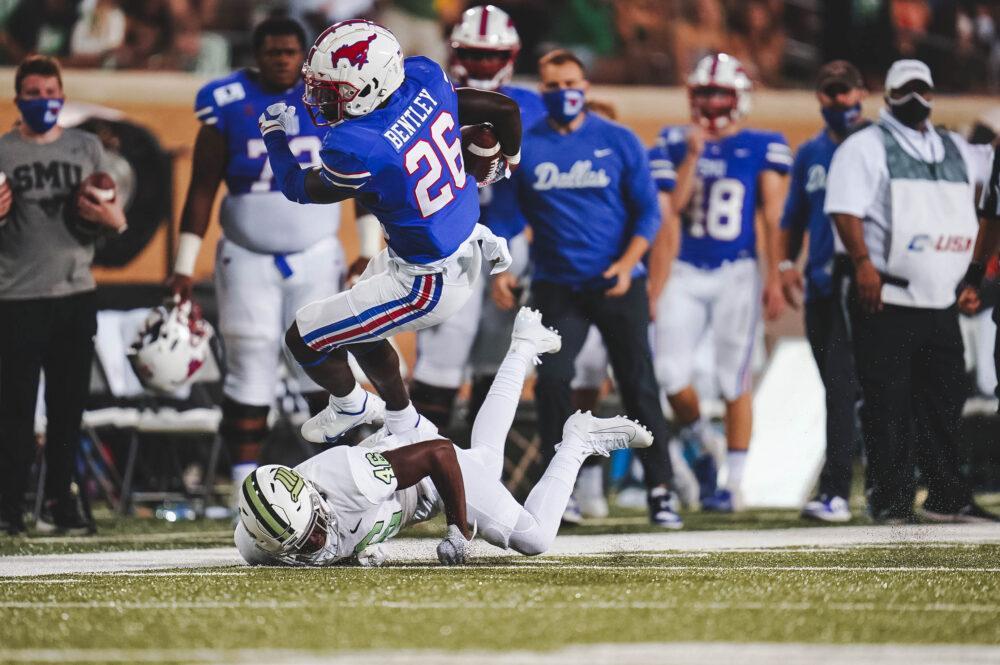 DENTON, Texas — Shane Buechele had been all but wrapped up. He was turned around, falling into the home sideline as white jerseys converged onto him, when he decided to break off toward the opposite field to covert the fourth down-and-two.

And if any play could epitomize SMU’s 65-35 thrashing of North Texas on Saturday, it was the senior quarterback’s theatrics on a three-yard run to end the first quarter. For a call that was never supposed to work, Buechele spun, bounced off North Texas linebacker Kyleb Howell and sidestepped safety Larry Nixon III in the open field to set up the eventual touchdown.

The added scream at the end of the run by the normally immobile, stoic leader served as the fitting punctuation for the performance.

“You know me, I like my quarterback safe,” Reggie Roberson Jr. joked after the game. “But whatever he has to do to get us a win.”

This win, though, was never in doubt. SMU looked the part of the team that had spurned UNT earlier in the week by downplaying the billing of a rivalry.

North Texas did not pick up a first down until its third drive of the game. It did not have a complete pass until head coach Seth Littrell elected for backup quarterback Austin Aune. And the home team did not get on the board until the Mustangs had already built a 24-0 advantage.

Meanwhile, SMU scored on each of its first four drives. The uncharacteristically sloppy play from the season-opener was replaced with the potent scoring attack resembling the 10-win season in 2019. The mainstays from a year ago, Roberson Jr. and Rashee Rice, combined for 14 catches, 205 yards and two touchdowns.

Buechele finished 24 of 32 for 344 yards and four touchdowns in three quarters of work.

For SMU, the rhythm of quick strikes and chunk plays remained the best option. Truthfully, it was the only option it needed.

Roberson, Rice and newcomer Danny Gray took turns recording 50-yard plays. If it wasn’t through the air, Ulysses Bentley IV was doing it on the ground. The UNT defense, playing down starting linebackers KD Davis and Tyreke Davis for medical reasons, watched as SMU compiled 710 yards in a game that dragged on four hours because of all the offense.

The avalanche of big plays happened quickly. In the first quarter, Gray outran two UNT defenders waiting for him at the 20-yard line en route to a 62-yard touchdown.

Later on, Bentley IV did his best impression of the same tune, churning in an 84-yard touchdown by splitting the secondary down the sideline. He finished with a gaudy 19 carries for 229 yards and three touchdowns.

“He had that one long run. Overall, I think that is the performance he can give us. He was pretty [good] tonight,” Dykes said of Bentley IV’s most productive game as a Mustang.

UNT had its chances to apply token pressure early. After SMU went up 14-0, Aune converted a fourth down at UNT’s own 41-yard line and led the team down the field. The drive, however, was eventually wiped away by a Brandon Stephens interception in the end zone.

“That was big. They had a chance early in the game to change the momentum and he came up with it,” Dykes said.

The Mean Green compounded the lack of answers with penalties. SMU went into the half without being penalized. UNT finished the game with 13 penalties for 98 yards.

The question now, for SMU, turns to whether this team can retake the form of the record-setting group from 2019. There are new pieces that looked to begin the process of acclimating to the offense. A 65-point day will do that.

Roberson, though, was purposefully coy about this topic of sizing up SMU’s chances to rekindle the offensive attack from 2019. For the reserved player, he elected instead to let out the nickname that used to define the duo of James Proche and himself to predict the future prospects of the this offense; and the team.

“Things are about to get real spooky. That is all I will say about that,” Roberson said, referring to the term “Spooky Brothers” which Proche made T-Shirts of last season to describe SMU’s air raid attack.

“Any time you can get a win like this it is good. We need to be more consistent though and we have a lot to work on,” Dykes said.