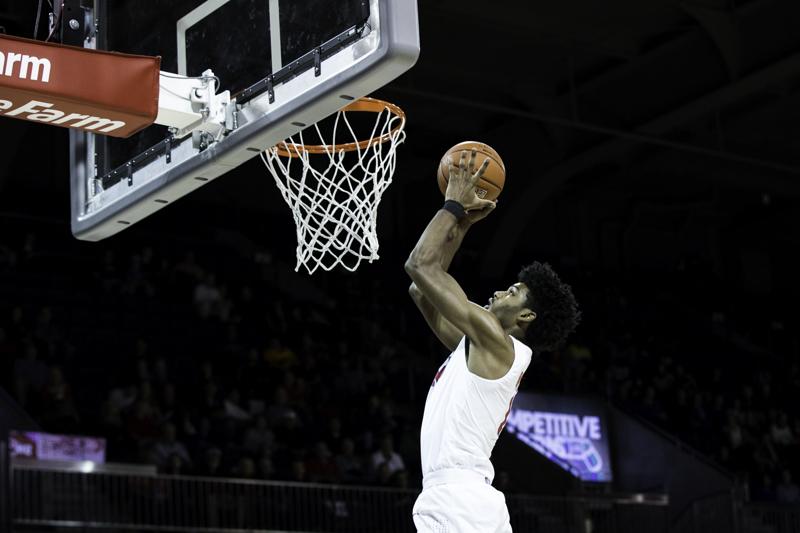 Jahmal McMurray is a key part of SMU’s offense. The senior guard leads the team at 18.3 points per game, and brings an element of shot creation that none of his teammates can.

Jankovich said after the game that the benching was due to a combination of McMurray showing up late to practice and nursing an injury. McMurray finally did enter 14 minutes into the game. He played out the first half, missed three shots and didn’t see the floor again.

“There was no real plan,” Jankovich said when asked about McMurray’s usage. “Sometimes you make plans and the game starts and the plan changes.”

Without McMurray – who makes 3.4 3s a game at a 38.7 percent clip – for most of the afternoon, SMU struggled to shoot the ball from outside. But that did not stop the Mustangs from trying.

UCF boasts the biggest player in college basketball in 7-6, 310-pound center Tacko Fall. Fall is dominant inside on defense, so SMU tried to mitigate his impact by stretching the defense, gunning 37 3-pointers.

“He played 26 minutes. I wish he played 18,” Jankovich said of Fall. “So you’re looking at 26 minutes of how in the world are you going to get something easy.”

Fall also lets UCF’s perimeter defenders can play aggressive outside, knowing they have a 7-6 safety blanket behind them. The result was that many of SMU’s 3s were contested; the team made just 10 of its 37 attempts.

Despite the poor shooting, SMU hung around in the second half and had chances to win the game. But seemingly every time the Mustangs got close, UCF would answer with a 3.

Ethan Chargois scored six straight points to cut the Knight lead to three with 13 minutes left in the game, but Aubrey Dawkins had the next basket with a 3. When Isiaha Mike followed with a 3, BJ Taylor immediately buried one of his own.

Perhaps SMU’s best chance to win the game came with six minutes left, when Mike cut the lead to three again with a dunk and reverse layup. After a Collin Smith tip-in put UCF up five, Mike got fouled on a 3-pointer. He missed all three free throws and Dawkins hit a 3 on the other end. SMU never got the lead inside six after that.

Fall had a tremendous defensive impact, but SMU limited him on offense. Six minutes into the game, he had 10 points and it seemed like an avalanche was coming, but SMU adjusted and held him scoreless for the rest of the afternoon.

“I’ve never seen a human being that large,” Mike said. “My mind kind of went away from basketball for a bit, just in awe. But after we got settled I feel like we did a pretty good job on him the rest of the game.”

Still, stopping Fall is not all it takes to beat UCF. The Knights have several talented perimeter scorers, including Dawkins, who had 24. SMU was overmatched on defense, allowing UCF to shoot 52 percent from the field.

One bright spot from the game was Mike. The sophomore forward made four 3-pointers, which has become a major part of his game. He also secured 10 rebounds to get his first double-double of the season. Jimmy Whitt led SMU in points with 23.

But at the end of the day, it wasn’t enough. With McMurray in the lineup, SMU has just six players who so much as pose a threat on offense. The team needs its dynamic guard back to salvage its season.