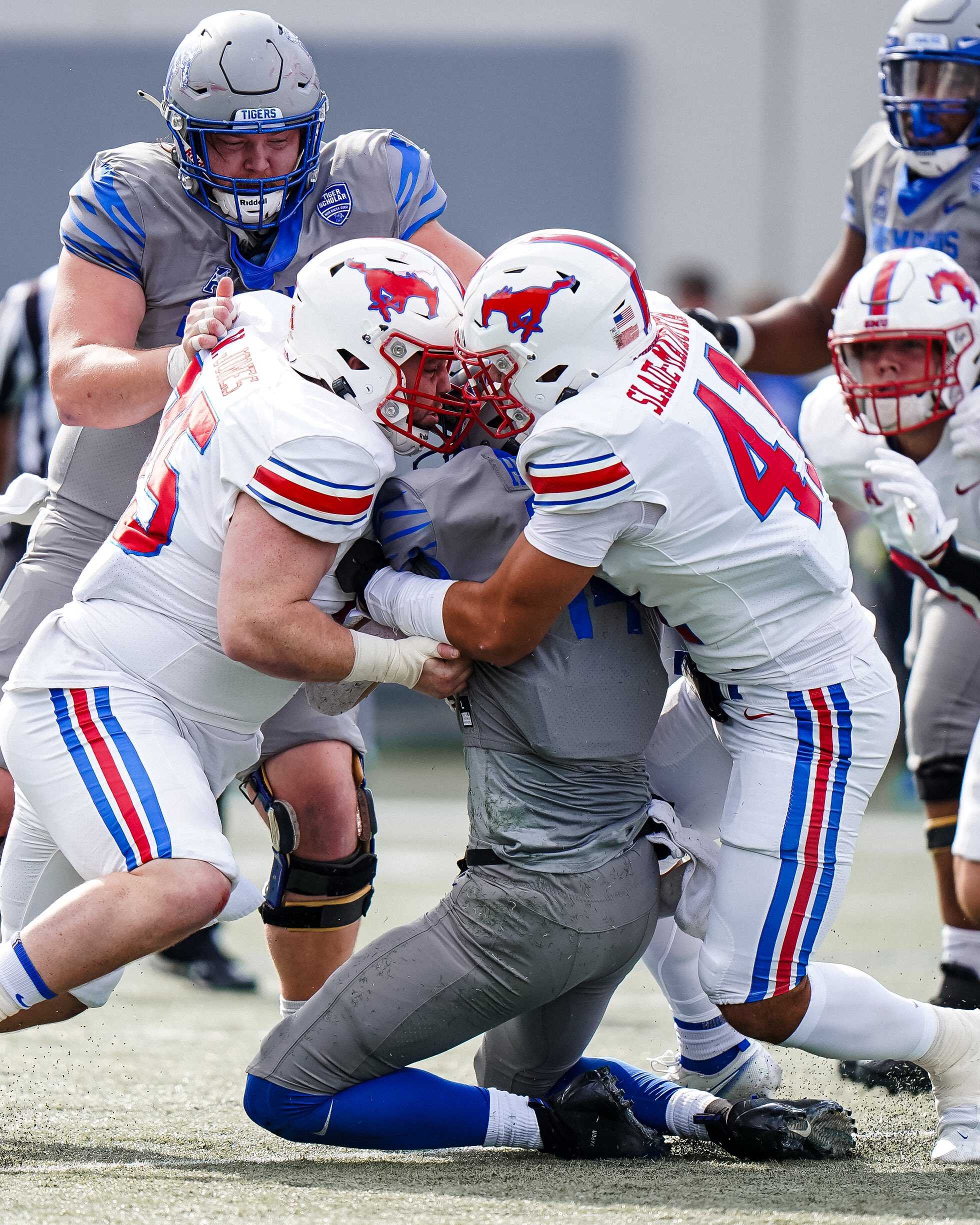 MEMPHIS — Alan Ali had every intention of making his way from SMU’s sideline and into the visiting locker room. He wanted to be with his teammates. He wanted to share the burden of another late-season loss.

But as he inched closer to the doors, something about SMU’s 28-25 defeat to Memphis prevented the fifth-year senior from actually going in. He hesitated near the mouth of the tunnel, crouched himself over the metal railing, and allowed himself one tear to drip out of his eye.

Fellow fifth-year senior Shaine Hailey soon joined him in the showing of raw emotion. Hayden Howerton, another of SMU’s elder statesman, did the same.

There was something about the image — three leaders separately collecting themselves before facing the team — that was so telling about Saturday’s game for SMU.

It was frustration boiled over that SMU, for the third-straight season, squandered an undefeated start to lose in the latter half of the season. SMU, after another loss on Saturday, is 4-8 after its first loss of the season in the last three years. It is 20-0 in all other games.

It was also frustrating that, again, SMU is struggling in the month of November and firmly out of the American Athletic Conference race. Two weeks ago, SMU was 7-0 and ranked No. 19. By Saturday, it will be 7-2, unranked and playing for a bowl game instead of a conference title.

“All three of us are fifth-year seniors. I think that is disappointing. All three times the three of us [have been in this spot] unfortunately have ended in the same result,” Howerton said. “It’s frustrating. We just have to get better.”

And in this game, SMU saw all the issues that had plagued it this season crystalize at the same time. It had a slow start. It turned the ball over. Its secondary was unable to make plays.

In isolation, SMU had been able to overcome those three issues through the first seven weeks of the season. But as they all came up at once, SMU looked like a team out played on the road for the second-straight week.

Tanner Mordecai had two turnovers, including a game-sealing interception with under two minutes to play that allowed Memphis to seal a win.

“We just made so many mistakes. You can’t win a football game, doesn’t matter who you play, when you make that many mistakes,” SMU head coach Sonny Dykes said. “Really, that is what it boiled down to. Very disappointed.”

The mistakes started early, as SMU went empty drive for empty drive with Memphis. It lucked into a 10-7 lead at the half, mostly thanks to Danny Gray catching a tipped ball that should have been intercepted and going 47 yards for a touchdown.

But as the game continued, it became clear SMU could not overcome its issues. SMU had eight drives of under five plays. On the defensive side, the secondary could not seem to stop Memphis from picking up fourth down conversions.

Memphis had over 130 yards of offense on fourth down, including setting up two touchdowns and actually scoring another on a fourth down an 11.

Memphis quarterback Seth Henigan had 392 yards passing and two touchdowns. Ironically, it wasn’t even his touchdown pass that ultimately gave Memphis its lasting lead. That was Rodrigues Clark, a running back, who took a direct snap and caught SMU off guard for a 40-yard touchdown pass that put Memphis up 28-10 with 11 minutes left in the fourth quarter.

It sent the Memphis crowd, which had been timid all day in a low scoring game, into a frenzy. SMU would climb back into it — thanks to a blocked punt and a turnover on downs — and had a chance to win driving with under two minutes to play.

But fittingly Mordecai threw the interception, and SMU dropped its second game on a mistake.

The questions ahead will be plentiful. Dykes will have to answer why his team is now 3-5 in November and 21-2 in all other months since 2019. SMU will have to grapple with the rest of the season, knowing it no longer controls its own density.

And Dykes will also have to answer if his own coaching rumors are starting to affect the team. He at least answered that question, after the game, with a no.

“Look, there is a very small margin of error. For us to win, we have to play really well. We can’t have turnovers. We have to be good on critical situations. All of those things have to happen in order to win. And just look at the statistics and it shows we were not that way.”

2 thoughts on “SMU drops second-straight game, continues late-season struggles as it falls out of contention in AAC”