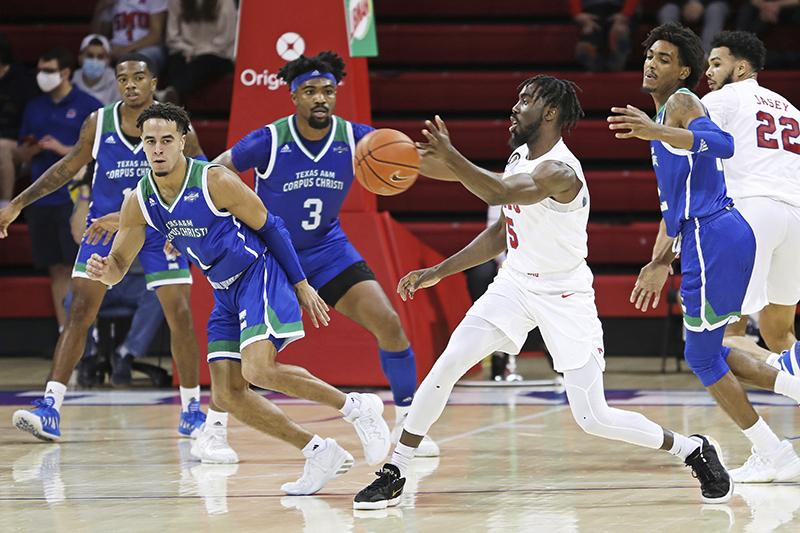 SMU cruised past Texas A&M Corpus Christi to advance to 2-0 for the season in its 91-54 victory over the Islanders.

Kendric Davis had another strong outing. After putting up a career-high 33 points last Wednesday, he earned his fourth career double-double on the road to 11 points and 11 assists. His comrade, forward Ethan Chargois, had a similar box score with 11 points and 11 rebounds.

Darius McNeil also made his long awaited debut. After 20 months of no on-court action because of NCAA transfer rules, he chipped in with 5 points.

However, besides these initial couple minutes, SMU was in total control of the game. Davis’ ball movement and assists helped SMU’s offense get going, while Bandoumel, 19 points, and Chargois, 17 points, hit timely threes on swings or kick-outs from drives.

Sharpshooter Charles Smith IV also had a big night, hitting three of his five threes off of the bench on way to 11 points.

SMU led by 25 at the half, and after the first 20 minutes, the game was little more than a formality. The Islanders struggled to find any consistency on both ends of the floor as they shot only 31% from the field while SMU connected on over half of their shots.

Key shooters like Jordan Hairston and Myles Smith, who shot over 40 percent from three last year, went ice cold shooting the ball. Hairston shot only 3-13 from the field, while starting guard Smith only made two of his six attempted shots.

The only bright spot for the Islanders was Perry Francois, who shot 50% from the field and attempted to array many post moves against SMU’s defense. Still, SMU held him to just eight points.

SMU connected on over 40 percent of its three pointers, and dominated in the paint. The Mustangs had 46 rebounds to the Islanders’ 29. The Mustangs nearly doubled the Islanders in assists, with 26 of them and ended the game with 43 made field goals. The Islanders also had more than twice of SMU’s fouls, totaling 20 for the game.

Behind a team-oriented and very balanced scoring game, SMU emerged victorious against the Islanders in a 37 point victory.

The Mustangs’ next game will be against Houston Baptist on Wednesday.