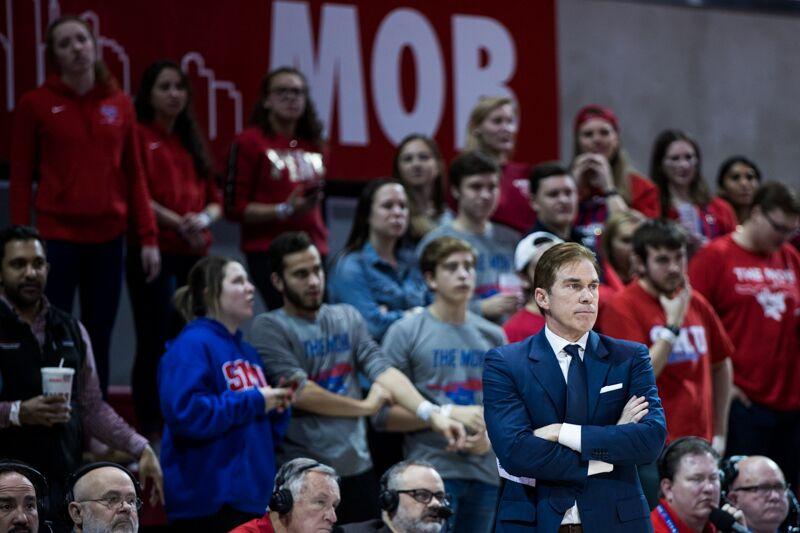 The SMU Mustangs were completely outclassed Sunday afternoon in Orlando, losing 95-48 to UCF and suffering the worst loss in the history of the program.

The performance was putrid on both ends, as SMU had no answer for 7-6 UCF center Tacko Fall, who dropped 23 points and 20 rebounds. While Fall’s size presents an obvious matchup problem, it is not characteristic for him to go off like this. He averages just 10.4 points and 6.8 rebounds on the season.

SMU does not have a size matchup for Fall. Its tallest players, 6-9 Jahmar Young and Ethan Chargois, do not have the strength or experience to deal with him. But SMU has found ways to limit Fall in the past. The Mustangs beat UCF all four times it faced Fall in previous seasons, before losing to the Knights twice this year.

SMU let Fall get deep catches in the paint where shots for him are close to automatic against defenders almost a foot shorter than him. On the other end, Fall altered possession after possession, forcing wild layups and kickout passes when SMU did drive towards him.

Fall’s fingerprints are all over the game, but when a team loses by 47 points, it isn’t because of one player. The Mustangs were listless for all 40 minutes of the game, allowing the Knights to score the first 16 points of the afternoon and not even making a run when UCF put in its walk-ons.

No player cracked double digit points, while five Knights did. Both teams took 69 shots and UCF made twice as many as SMU did. The Mustangs also got out-rebounded by 23.

For most of the season, SMU has fought hard. Whatever you want to blame this year’s lack of success on: talent, injuries, gameplans, sanctions; effort is the one quality that the team has showed game in and game out. When the Mustangs got down 13-0 to Memphis in January, it battled to back to cut the lead to four, before the game eventually slipped away.

With a loss like this, the effort could wane for what’s left in the season. If that goes, those in charge will have to start thinking seriously about whether Tim Jankovich should return. They may decide he needs a chance with no scholarship reductions, but a loss like this cannot be covered by any excuse. Whether it’s recruiting or in-game coaching, this team is one of the worst in the AAC and a far cry from what it was just two years ago.

After Sunday’s game, the temperature on Tim Jankovich’s seat turned up several degrees.