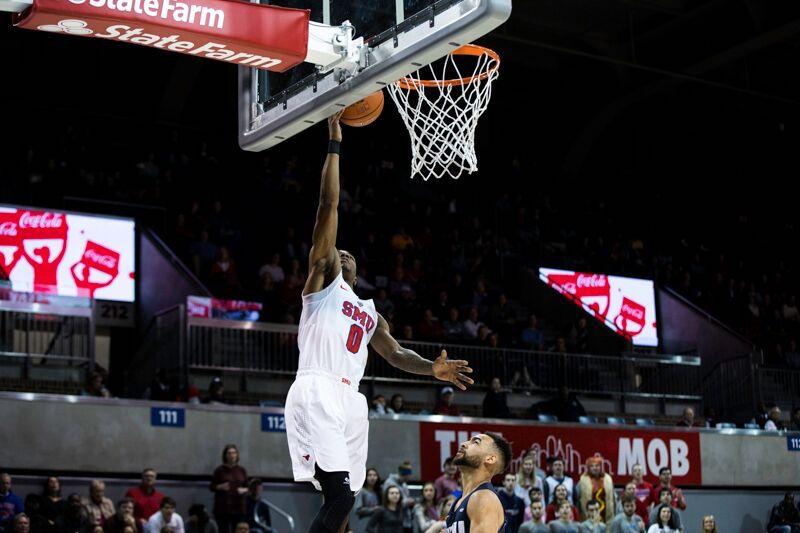 After being barely edged out in two straight games, it seemed like SMU had finally stolen a close one for itself Thursday night. Until it hadn’t. South Florida guard David Collins sank a go-ahead 3-pointer with 6.2 seconds left in the game, erasing a late 11-0 SMU run that got the team a late lead. Ethan Chargois’ last second 3-pointer missed and the Mustangs fell to the Bulls 67-66 Thursday.

The loss came eight days after Wichita State’s Samajae Haynes-Jones beat the Mustangs in the game’s final second, and five days after SMU’s offense went dry late in the game against Cincinnati.

For a short while, it seemed like the Mustangs would be breaking USF’s hearts. The Bulls led 61-53 with five minutes remaining, and it didn’t seem SMU had anything left on offense. The team went scoreless for three minutes before Feron Hunt dunked an alley-oop to cut the USF lead to six.

A Chargois free throw and Isiaha Mike’s fourth 3 of the night cut the lead to two, and Jimmy Whitt picked up a loose ball and kicked it out to Chargois, who buried the go-ahead 3. Jahmal McMurray made two free throws to extend the lead to three, but Collins hit a 3-pointer to tie it.

Chargois followed that up immediately with two free throws. On USF’s next possession, Collins missed near the rim and Mike got the rebound. But Mike was trapped with his back to the baseline, and threw the ball away. Nat Dixon dove on it, but was tied up for a jump ball. It looked like Dixon might have kept possession of the ball to call a time-out, but the referees didn’t see it that way. The possession arrow was pointed to the Bulls, so they kept the ball.

On its crucial possession, USF opted to go with a double screen. Michael Durr and TJ Lang set screens at the top the key, and as the ball-handler LaQuincy Rideau dribbled around him, Jimmy Whitt was caught on a screen, so Feron Hunt stepped up to pick up Rideau. Whitt followed Rideau, placing two defenders on him, leaving Mike left to cover two shooters on the weak side. 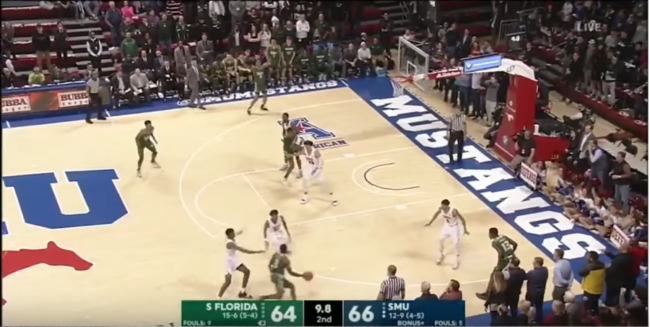 Instead of trapping Rideau hard, Hunt tried to retreat to Lang, who’d popped out to the perimeter. It was too late. Mike was left in no man’s land, and Hunt leaving Rideau gave the guard the airspace he needed to skip a pass to the corner, giving Collins just enough time to fire off a 3. Splash.

SMU still had 6.2 seconds left, and Whitt sprinted down the court before throwing an errant backwards pass that Chargois recovered and hoisted a deep 3 that fell short.

Between the three last-minute losses that his team has suffered in the last eight days, Jankovich sees a common theme.

“It’s painfully obvious,” he said. “Our defense this team of year… you hope to be so solid and have such great habits so that when you do play hard you’re instinctively in the right spots most of the time and you make very few mistakes. You look at our numbers, we’re not near the defensive team you usually are.”

There have been complications. Injuries and scholarship reductions have limited the team’s ability to practice 5-on-5, but that didn’t stop the team from building an elite defense in his first full year as head coach.

Tonight, it was USF’s guards that gave the Mustangs trouble. Collins led the way with 23 points, hitting three 3s and consistently slicing into the lane for layups and dunks. Rideau added 14 points and nine assists.

One aspect of the defensive performance that hasn’t been lacking is effort. The team goes after rebounds and loose balls, and never shows any sign of quitting. In one second half possession, the Mustangs secured four offensive rebounds in a row, putting up miss after miss but still going hard after the ball. Finally, USF corralled a miss to end the possession scoreless.

An offensive bright spot for SMU has been Mike’s shooting. The sophomore poured in four more 3-pointers Thursday, pacing SMU with 18 points. Jimmy Whitt scored just six, but had eight rebounds and eight assists. Still, it was not enough.

So how does SMU come back from three straight losses like these?