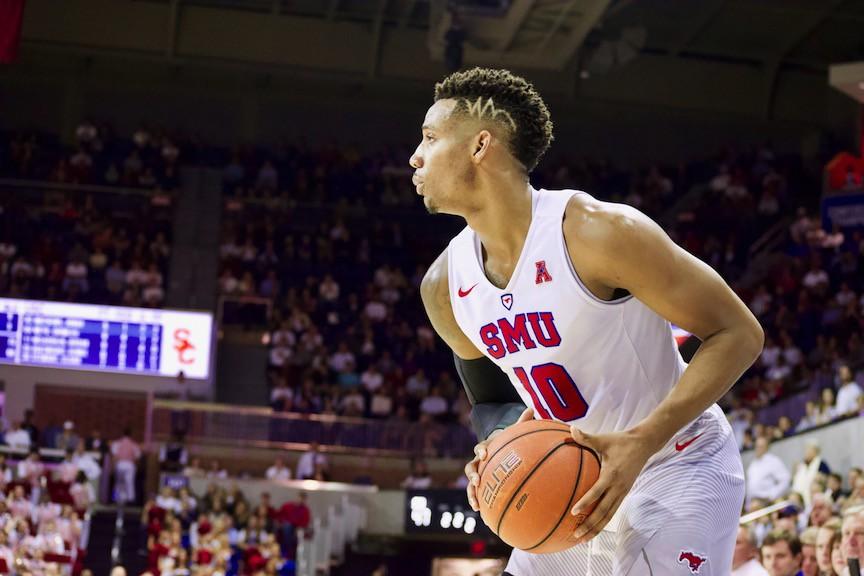 Coming off a big win Saturday against the USC Trojans, the SMU Mustangs traveled to Fort Worth on Tuesday to take on the No. 20 TCU Horned Frogs, hoping to secure its third victory over a top 25 team this season. But the Mustangs failed to get it done, falling to their rival 94-83 in their first true road game of the season.

“I felt like we were just a step slow [tonight],” SMU head coach Tim Jankovich said.

SMU fell behind early, largely due to TCU’s size. The Horned Frogs led by six going into the under-16 time out in the first half. TCU was able to clean up the glass on both sides of the court.

SMU’s play improved as the half went on, and the Mustangs took the lead with a 10-2 run. Ethan Chargois was a big reason; his three-pointer sparked the run. Chargois ended up with 21 points, 13 of which came in the first half.

The Horned Frogs responded with a run to go into the half up 43-38. They were led by six-foot-seven guard Kenrich Williams, who hit three of his four first half attempts from three-point range to go into the break with 13 points. He would finish with 27 on the night.

“Every time he threw the ball at the basket, it seemed to go in,” Jankovich said.

Foul trouble plagued the Mustangs throughout the game. TCU was in the bonus midway through the first half. Jimmy Whitt picked up his second foul in the first half and had to sit. By the 10-minute mark in the second half, Shake Milton, Chargois, Ben Emelogu, Everett Ray and Whitt all had three fouls. SMU was forced to turn to its bench, which only recorded three points.

“To be in foul trouble, it’s not a recipe to win games,” Jankovich said.

SMU battled back into the game to cut the Frogs’ lead to one point with just over 11 minutes remaining in the game. Then, the wheels started to fall off. The Horned Frogs outscored the Mustangs 40-30 from that point.

Again, the three ball made the difference for TCU. The team finished 12 of 24 from behind the arc. SMU made six of 21 and went two for 12 in the second half.

“They played very, very well,” Jankovich said. “They really shot the ball very, very well. We didn’t look like the same defensive team we were a few nights ago. ”

In addition to its foul trouble, SMU also struggled to maintain possession of the basketball. SMU turned the ball over 15 times, which combined with the fouls, led to frustration, coming to a head when Emelogu tackled Williams on a fast break and picked up a flagrant foul.

Milton struggled from deep, shooting just one of eight from three-point range. He also turned the ball over four times but finished with 18 points and nine assists. Jarrey Foster was the second-leading scorer for the Mustangs with 19 points.

SMU’s record falls to 7-3 on the season. The team will return to the court on Dec. 13 to take on the New Orleans Privateers at home.