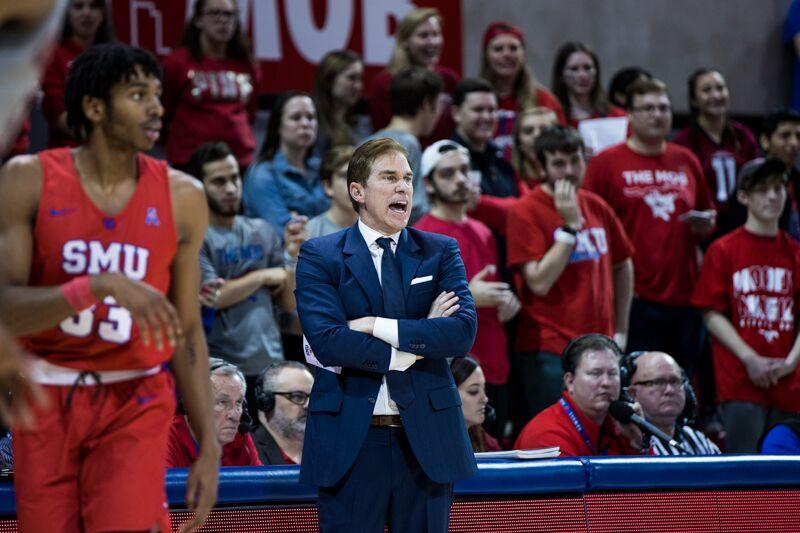 MEMPHIS — SMU’s AAC Tournament game against Cincinnati followed the blueprint set by the schools’ first two meetings to a tee. The Mustangs hung tight for most of the game, but Bearcats’ size, depth and American Athletic Conference Player of the Year helped them seal a victory in the end. They topped SMU 82-74 Friday night, ending the Mustangs’ season.

Jarron Cumberland poured in 26 points and eight assists for Cincinnati, making bucket after bucket in crunch time and validating his AAC Player of the Year honor. Cumberland’s late game heroics put away an SMU team that would have been halfway to an improbable NCAA Tournament bid with a win.

Early in the game, it seemed more realistic that SMU would pull off the upset. The Mustangs needed to start fast, and they did. Mick Cronin tore into his team after its loss to Houston ended its regular season, but SMU seemed more ready to go at the outset. Hustling after loose balls and making jumpshots, the Mustangs led 29-21 in the first half.

“They hit a lot of shots they normally wouldn’t make,” Tim Jankovich said. “I give them credit for that. But they continued to shoot the ball.”

Cincinnati worked to get the ball to the elbow, putting another man under the rim. Once the ball was at the elbow SMU’s center, usually Ethan Chargois, was faced with a decision. He could step out to contest a short jumper, but that would leave the big man open under the rim for a lob. Chargois mostly opted to stay under the rim, allowing Bearcats to rain mid-range jumpshots.

The Bearcats took advantage, scoring 40 first half points, prompting the change to man. Cincinnati had no trouble with the new look at the beginning of the second half, scoring 12 points in just more than four minutes.

A large part of Cincinnati’s second half success came from rebounding. The Bearcats’ large and physical big men tossed around SMU’s, leading to a seven-rebound second half advantage. Cincinnati’s Tre Scott and Nysier Brooks combined for 20 rebounds.

Despite its struggles on the glass, SMU got back in it. When Cincinnati seemed prime to run away with the game, Jahmal McMurray rolled in a contested 3-pointer, Jimmy Whitt got a steal and slam and Isiaha Mike converted an and-one, cutting the Bearcat lead to one. Minutes later, Whitt tied it with two mid-range jumpshots.

Whitt’s mid-range jumper was going all night, as he led SMU in points with 24. Whitt got to his spots and shot over Cincinnati’s long defenders, knocking down difficult shots.

“Get to the mid-range, pull up, shoot it. That’s my go-to shot. I try to shoot it every game,” Whitt said.

Late in the game, Cumberland notched two and-ones, the second of which put the Bearcats up 73-68. After a Whitt miss, Scott scored to extend the lead to seven, effectively putting it away.

The loss put an end to the SMU careers of Jarrey Foster, Jahmal McMurray, Nat Dixon and James Pyle. In the final game of Foster’s four-year career, he scored just five points but was a presence on the defensive end. Foster has seen an NCAA Tournament worthy team miss the dance because of NCAA violations, played in an NCAA Tournament game his sophomore year and seen the team fall into a tailspin in his last two years as he recovered from a torn ACL.

Foster’s career signifies the pinnacle and fall of the Larry Brown to Tim Jankovich era. March Madness, postseason suspension, injuries and a downward tumble. SMU will have to rebuild without many of this season’s key contributors, and questions remain about whether Jankovich is the man to bring the program back to prominence.

As for Jankovich’s job status, he has three words. “It’s all good.”