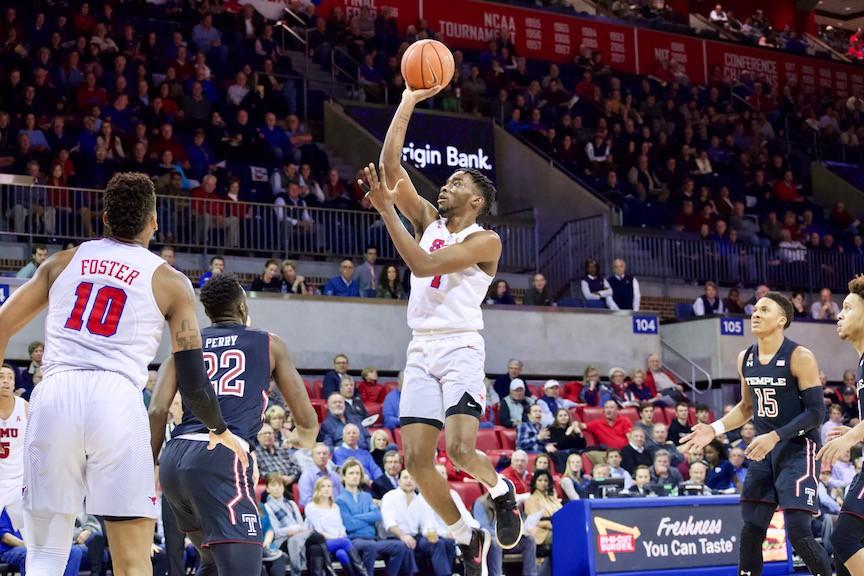 While everyone in the stands had that streak on their minds, head coach Tim Jankovich did not.

“We never talked about the streak,” Jankovich said after the loss.

SMU battled back from a 13-point deficit in the second half, but the Owls tied the game with just 54 seconds left in the game with a jumpshot by Obi Enechionyia. SMU was able to get off one more shot during the remainder of the game, a difficult floater from Shake Milton that fell short of the rim.

Jankovich tried to get his team to call a time-out to get two shots off in the remaining seconds, but the players could not hear him.

Temple, previously 0-4 in conference play, won the game on a Josh Brown bucket that put Temple up by two with just 1.3 seconds remaining.

“You can look back on some of our losses and say just that was the reason,” Coach Jankovich said of the team’s poor free-throw shooting. “If we only did better in that area, we probably could have won two or three more games. But we didn’t.”

Temple guard Quinton Rose led the way for the Owls, tallying 23 points. However, the Mustangs found a way to shut him down late in the game. In the latter part of the second period, Rose went cold, committing three turnovers and missing a free-throw down the stretch. That lapse allowed the Mustangs to storm back on a 13-5 run. Ultimately, it wasn’t enough, as Enechionyia also contributed 16 points and seven rebounds for the Owls.

Shake Milton connected with Jarrey Foster for two thunderous alley-oops in the second half. Milton lead all scorers with 25 on an efficient 8-12 from the field and added five rebounds and five assists. Foster and Ben Emelogu each had 11 points. The leading rebounder for the Mustangs was the guard Jimmy Whitt, who put up nine boards.

Everett Ray was did not play for the Mustangs. Jankovich mentioned that he would have liked to give him and Ethan Chargois more minutes, but didn’t feel comfortable having big men out there.

“It was a small-ball game,” Jankovich said. “You can’t ask big guys to chase guards.”

The Mustangs have now lost three straight. They will now travel to Wichita State to play a road game against the No. 5 Shockers next Wednesday.