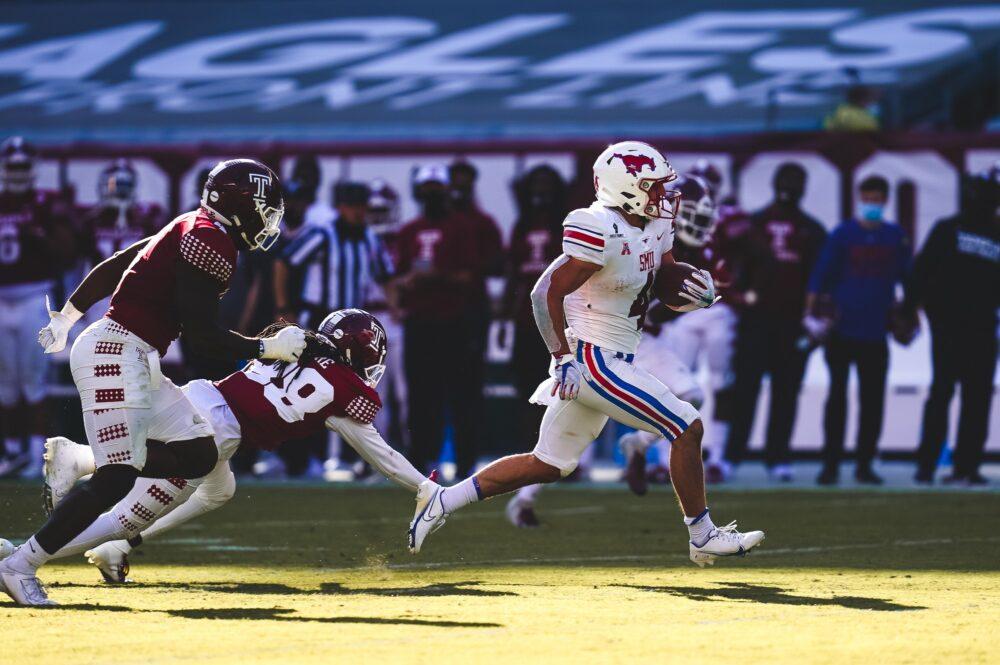 It was the same play SMU called in the first half. Tyler Page took a short drop-off pass, split the field to the opposite side, broke off a tackle and jogged in for a 44-yard touchdown.

This time, though, Page’s second score of the afternoon early in the third quarter gave SMU its first lead since the last time it was called: on the opening possession of the game. It also spurred a 34-3 second half run that worked to quell a Temple team that put up its best effort at home.

Ultimately, though, for every one of Page’s spinning, stop-and-start, meandering runs in a 47-23 SMU win, it a slow first half that will linger the longest for the Mustangs.

“We got off to a slow start. [Head coach Sonny] Dykes said that if we didn’t pick our crap up, we were going to have to practice on the field after the game,” Page said in the post-game Zoom. “In the second half we got back to our roots.”

For a game that was meant to be SMU’s final tune-up against one of the bottom dwellers of the American Athletic Conference, Saturday was not that. Temple led for over 22 minutes and was within one possession until the final 12 minutes of the game. SMU was held to 192 yards at the half, one of its lowest totals in the last two seasons, against a defense that was ravaged by injury.

Temple eventually wore down, looking the part of a team that just last week had 13 players on the COVID-19 list. It was notably missing its starting quarterback, linebacking crew and most of its offensive line.

The big plays for SMU started with Page, but then Kylen Granson had a 24-yard score left wide open in the end zone. Tyler Lavine plowed his way forward on the ensuing possession for a two-yard score. All of it was capped off by third-string running back TeMerick Williams running untouched for a 49-yard to push SMU just under 550 total yards.

“I thought we probably weren’t as prepared as we needed to be in the first half… I told the guys at the half that we were lucky not to be down 50-3 at the end of the first half,” head coach Sonny Dykes said. “But the second half I thought we played about as well as we have all season.”

This still wasn’t the performance SMU wanted, or expected. With a road game against Tulsa that may well determine a place in the conference championship coming next week, SMU looked sloppy . It went for big plays but did not convert in the first half.

Dykes opted to go for it on fourth down inside the red zone instead of kicking a go-ahead field goal in the first quarter. SMU didn’t get it. Temple responded with a touchdown on the next series to take a 13-7 advantage.

Later on, SMU declined a penalty thinking that Temple would not be able to convert on a third down-and-six. A play later, Temple converted and went into SMU territory.

It was plays like this that kept a Temple team that struggled offensively, even when it had the lead, in the game. In the second half, though, Temple did not have the firepower to keep capitalizing on the mistakes.

“We needed a spark because we came out flat,” Dykes said of the early aggressive calls.

On the offensive side, SMU also seems to take awhile to find its footing. Ulysses Bentley IV struggled to find rushing yards in the first half. After a 26-yard effort in the first two quarters, on 12 carries, he was pulled for Levine to start the second half. The fourth quarter was kinder to the redshirt freshman, who finished with 79 yards.

The real reason SMU played well in the second half, though, had a lot to do with Page and Granson. The two combined for 280 receiving yards and three touchdowns. Page finished with a career-high nine catches and 207 all-purpose yards.

“It means a lot to me. To be in this position as a senior, I have waited a long time for this chance,” Page said.

Page, with injuries to Reggie Roberson and Danny Gray, has emerged at the top receiving threat for the time being. Rashee Rice and Granson are also in the mix, but the once third-string wide receiver is the newcomer to a prominent role.

“With Reggie being out, it opened some things up on the inside and we thought a lot of those balls would go to Tyler and Kylen. Those guys made plays and they played well,” Dykes said. “I thought Tyler was just about the only player who played very well.”

It is a road win. It wasn’t always pretty, but pushed SMU to 7-1. Last year, SMU got as high as No. 14 in the country. Now, at No. 18 this week, the Mustangs could potentially threaten to sneak past that marker.

More importantly, it controls its own destiny to make an appearance in the conference championship game.

“You know it was a road win which is always good,” Dykes said. “I think the last thing you have in your program from going from a really good program to a great program is you learn how to play well no matter who your opponent is. You learn to have a standard regardless of who you play, and we are still learning that.”