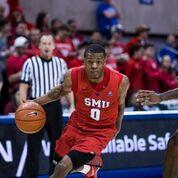 If there’s one trait that’s defined the Mick Cronin at Cincinnati, it’s physicality. The SMU Mustangs got a taste of that in their 52-49 loss to the No. 23 Bearcats Wednesday night.

Cincinnati out-rebounded the Mustangs 50-35, 21 of which came on the offensive end. The rebounding performance allowed the Bearcats to overcome a lackluster, 26.6 percent shooting performance.

“We’re not the biggest bodied team across the board but I just wish we were a more physical team,” Tim Jankovich said.

Despite allowing 16 first half offensive rebounds, SMU went into halftime with a 28-22 lead. The Mustangs held tough after Cincinnati went up 19-14, allowing just three points in the final 5:59 of the half.

Feron Hunt was instrumental in digging the team out of its small first half hole, tipping in a layup and getting a steal for a breakaway dunk on back-to-back possessions. SMU also ended the half on an 8-0 run. After a 3 by Jahmal McMurray and a layup by Isiaha Mike, Nat Dixon made a heads-up play, racing to the corner after missing a layup. Hunt grabbed the offensive rebound and hit Dixon for a 3.

After halftime, Cincinnati regained control. The Bearcats’ stifling defense held SMU to just 21 second half points. Cincinnati’s quick and physical guards did not allow dribble penetration often, and when they did a big man was there to clean it up. The Mustangs wound up settling for tough midrange shots a lot, and they didn’t go in often.

Still, SMU kept it close for the whole game half. With 1:07 remaining, McMurray converted a four-point play to cut Cincinnati’s lead to two. But after getting a stop, McMurray chucked up another contested 3, and this one did not go in. Jarron Cumberland got to the free throw line on the other end and calmly sank both. SMU did not get another opportunity to tie the game.

That four-point play was the exclamation point on an outstanding offensive night for McMurray. The senior guard had 27 of SMU’s 49 points, and was a one-man offense for SMU all night. His 10 made field goals equaled what the rest of SMU’s players combined to make.

Of course, that statistic illustrates the struggles that McMurray’s teammates had. The rest of the team went 10 for 35, including a scoreless outing for Ethan Chargois. Cincinnati plays long and physical big men in Nysier Brooks and Tre Scott, and Chargois wanted no part of going up against them, shooting just one 2-pointer.

While the Mustangs struggled offensively, they made sure their opponent did as well. Cincinnati had immense trouble getting easy shots off against SMU’s zone, and relied on offense rebounding and free throws for most of their points.

Cronin’s Cincinnati teams have turned into an AAC power by grinding out low-scoring wins, even when their shots aren’t falling. Wednesday night was no different.