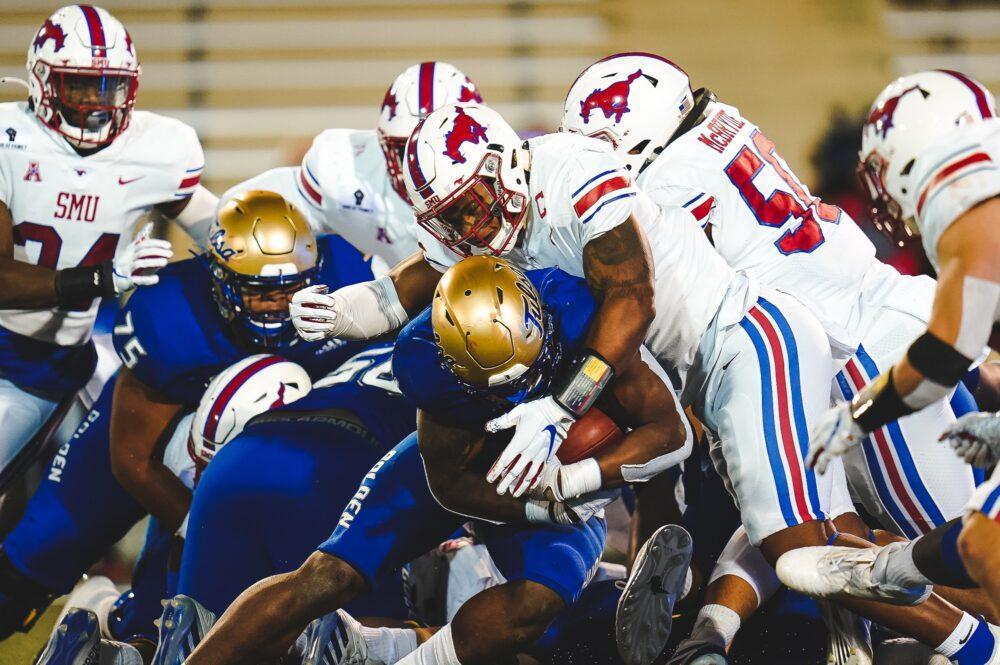 TULSA, Okla. — Shane Buechele stood with a look of disbelief as he watched the seconds mercifully elapse on SMU’s most implausible loss in years.

On the sidelines, staring down a 28-24 final score, the moment wound back in his mind time and time again. The ball left his hand, Kylen Granson fell and Buechele’s final throw of a 21-point meltdown landed softly into Zaven Collins’ hands for an interception. Along with it went SMU’s season.

The most improbable comebacks had been completed. Tulsa, on the losing end of a 21-point comeback a year ago in Dallas, returned the favor in grand fashion. Where as last year SMU needed three overtimes to comeback from a three-touchdown deficit, Tulsa needed just 16 minutes.

A must-win game for an SMU program needing a win to earn a spot in the conference championship game slipped through its fingers.

Fair or not, the label as a team that can compile wins in the regular season but cannot break through will linger a bit longer. For the fourth time in two years, SMU faltered in a game that could have sent it to a conference championship. This was just the most painful iteration of it.

SMU took a three-possession into the half and held onto it as late as the two minute mark of the third quarter. In seemingly every way, it appeared this was not only going to be an SMU win, but a statement win at that.

The opening possession, Tulsa quarterback Zach Smith lofted an interception that was returned for a touchdown to Brandon Crossley. Three plays later, Smith dropped the ball as he threw and SMU recovered it inside the red zone. In the first seven minutes, SMU was up two touchdowns.

But every chance SMU had to effectively end the game, something always seemed to get in the way.

Late in the third quarter, SMU thought it had come up with a goal line stand and forced a fumble. Instead, the play was overturned and TJ Wilkerson barreled into the endzone two plays later to cut the lead to two possessions.

Even if that play went another way, however, the offense could not seem to put the game away either. SMU did not score a point the second half. After the intermission, the offense was on the field just 11 minutes. On two occasions, SMU turned the ball over on downs.

By the time SMU could even muster a frantic comeback attempt in the final minute, playing without the lead for the first time, the game was already all but over. The Buechele interception was only the visual manifestation of what the stadium already knew. SMU’s season was fading and Tulsa’s momentum had quelled any hope of a comeback.

When James Palmer extended the ball over the end zone untouched to give Tulsa a 28-24 lead with two minutes left on the clock, the mostly lifeless crowd started reigning down the chants of “TU” onto a shell shocked SMU bench.

Buechele went 18-of-36 passing for 200 yards. Ulysses Bentley IV tallied 103 yards on 26 carries and a touchdown. But the numbers never translated to points. SMU put together only one scoring drive the entire evening that was not set up by a turnover or muffed punt.

For everything this game represented for SMU, this was a letdown. This was going to be the game where SMU avenged a late-season loss in 2019 that kept it out of the conference championship game. It was going to be the culmination of a season where it had knocked off its only losses from a season ago, both against Memphis and Navy.

But Tulsa, in the same fashion SMU had beaten it a year ago, denied all of it.

Dykes had just three words in the response to questions of whether he had thought about the big picture of a loss.