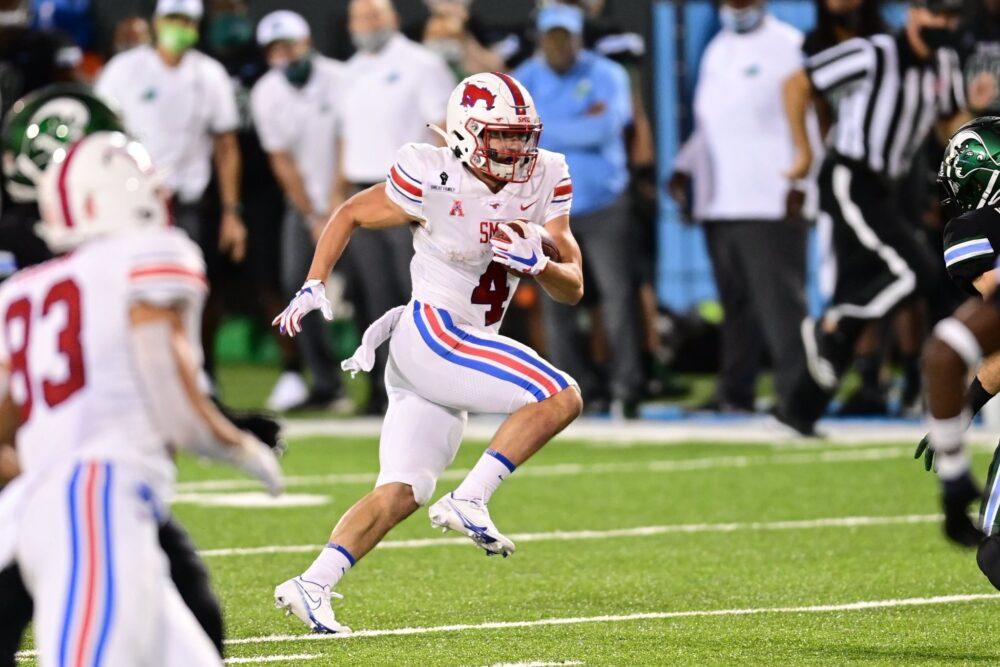 UNIVERSITY PARK, Texas — The similarities between Tyler Page’s first touchdown of 2020 and his last receiving score, dating all the way back to 2018, are striking.

In both instances, Page took a short screen pass near the line of scrimmage, wove between a pair of would-be tacklers and jogged untouched into the end zone. It was the quintessential Page play, plotting and bouncing around until he found a hole.

But the two touchdowns couldn’t have been more different. Not in time. Not in magnitude. And not in significance.

As Page celebrated a 44-yard touchdown in Philadelphia on Saturday, he did so as SMU’s main option on offense. It was the biggest moment of the game, when SMU needed points in a must-win situation. The senior, who has spent his entire career buried in the depth chart, is now the centerpiece down the stretch of SMU’s run to a conference championship game.

“You know, it has been a really long process. I’m a senior and have been here a long time. I have really just been waiting for this opportunity,” Page said. “Now, I just have to fill that role.”

The immediate reason why Page has been thrust into this unlikely spot has much to do with circumstance.

SMU’s star wide receiver Reggie Roberson Jr., the heir apparent to James Proche, went down grabbing at his knee against Memphis in the fourth game of the season. Two days later, it was announced he was out for the year.

Then, two weeks after that, fellow wide receiver Danny Gray exited with a wrist injury. In the span of two games, SMU lost nearly 65% of its offensive production. It was a perfect storm for the plug-and-play performer of a Page.

“He is a great player. The only thing that held him back was he was behind players,” quarterback Shane Buechele said. “Last year he was behind Proche. [This year] he was behind some other guys. But he is a tough player, a smart player.”

But just being at the right spot on the depth chart minimizes the journey. His placement on the depth chart at all is an accomplishment. There were games last season when Page’s name was not printed on the two-deep depth chart that is doled out before games. It is part of the reason why the senior went nearly two years without recording a receiving touchdown.

The coaching staff has tried to replace Page at times, citing that he was not “big enough” or “fast enough.” By both height and weight, he is SMU’s smallest wide receiver on the active roster. He has been moved around by position on offense, defense and special teams.

Now, a smattering of examples.

Last year, he started the season returning punts. He then lost the job to UCLA transfer CJ Sanders. By the end of the year, Page wasn’t even the third option on special teams.

This year, too, he thought the position was his. But instead SMU elected for Gray and Arkansas transfer TQ Jackson, both faster and bigger.

In high school, Page played quarterback at Friendswood. At SMU, though, he was eventually moved to wide receiver and put behind the Courtland Sutton and Proche. His career was a mix of being lost in the shuffle, used sparingly and with only moments of prominence.

Each time SMU tried to move off of him, though, it somehow wound back to Page. After Jackson muffed punts this year, it was Page out returning kicks and averaging SMU’s highest return yardage of the season against Temple. After SMU thought Rashee Rice would be the guy to step up after the wide receiver corp decimated with injury, it was Page who led the team in receiving on Saturday finished with a game-high nine catches.

“He is one of those guys that every business, football team, little league soccer team goes ‘Oh, we are going to replace this guy with someone who is bigger, faster, stronger,’” head coach Sonny Dykes said.

And now the five-foot-11, 193-pound player has his chance. It was evidenced on Saturday. Every time SMU needed a spark, it turned to Page. He was targeted a team-high 11 times. He set career numbers in a 131-yard, two-touchdown performance. He perhaps salvaged the season in a game that could have derailed all of SMU’s plans.

In a game against Tulsa this week, a chance for SMU to be on the inside track at a conference championship game for the first time in decades, Page will be SMU’s go-to player.

“Page has really come on, especially in the last couple of weeks,” Tulsa head coach Philip Montgomery said. “[SMU] was pushing balls to players but now they aren’t. It makes them more dangerous.”

Page has already eclipsed his career statistics in eight games in 2020. This season, he has 32 catches for 386 yards and two touchdowns. In his three previous seasons, he had 26 catches.

“At the end of the day, it is just more important to him. He is going to be more disciplined, work harder and prepare better,” Dykes said. “When the game starts on Saturday, his performance will be better than everyone’s. And that is how you win football games.”