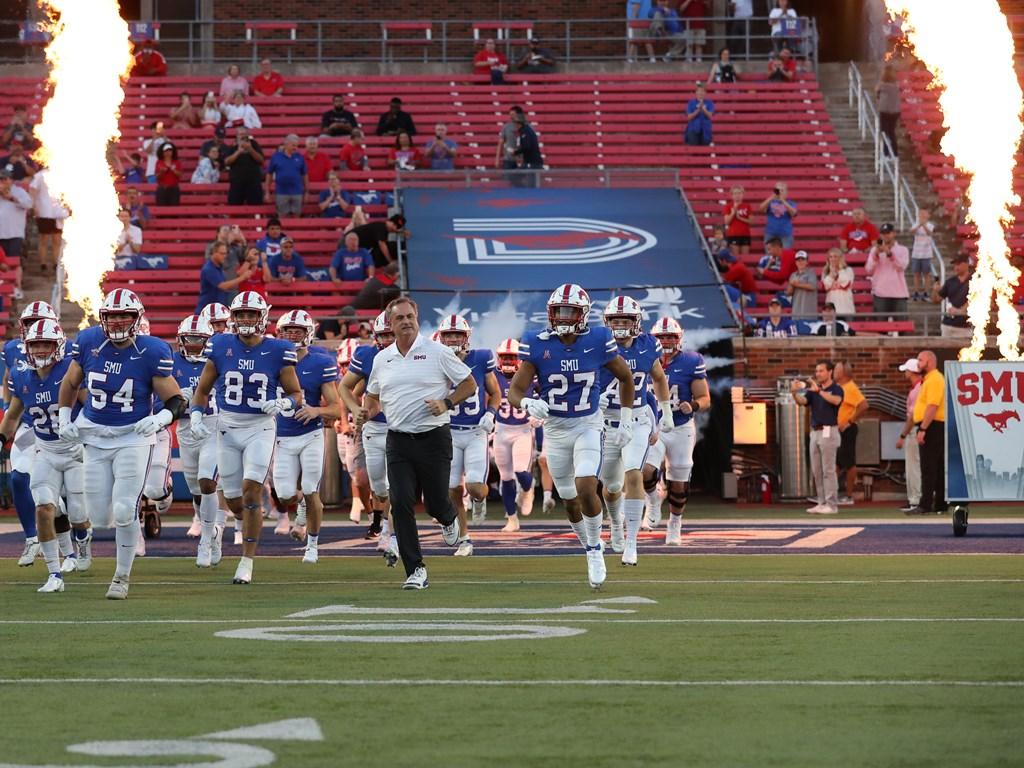 UNIVERSITY PARK, Texas — Welcome to the American Athletic Conference, where there is only one ticket to relevancy and dozens of landmines to get there.

Its ticket to relevancy will be a game against Cincinnati on Nov. 20, a day that is shaping to be a potential landing spot for College GameDay.

It will also be a matchup, theoretically speaking, of two undefeated, top 15 teams and a preview of the conference championship game. SMU has not won a conference since The Death Penalty.

But before any of that can happen, SMU will have to wade through games against Houston, Memphis and UCF to even make a Cincinnati game relevant. Any stumble in those three games, in the American, will not only derail SMU’s largest chance at a national stage, but also put the entire season in jeopardy.

If SMU loses to Houston, for example, it would likely force SMU out of the Top 25 poll and out of position to even make a conference championship appearance. A 7-0 start down the drain.

It means, while there are potentially bigger ticket games ahead, Houston has to be among the most important games SMU has played in years. And it’s also important because, in the last two seasons, SMU had been unable to deal with the thin margins of the American, losing games that could put it on the path to a conference championship.

“We know how big of a game [Houston] this is for our program,” Dykes said on Tuesday.

Three make-or-break games, ahead of a potential Cincinnati game, all at the end of October and November is not exactly where SMU has shined in the past.

SMU, combined the last two seasons, has gone 3-3 in the final two months of the season. In all other months, SMU is 21-1.

In 2019, SMU raced out to an 8-0 start. It positioned itself for a conference title. But then it proceeded to fall to Memphis. Then, two weeks later, it fell to Navy. By the time bowl season went around, SMU was unranked, out of conference contention and careening to a 24-point loss to Florida Atlantic in a bowl game.

Last year, too, SMU had set itself to be competitive down the stretch of the season. But then it fell to Tulsa on the road. A week later, it lost to a two-win East Carolina team before the season shut down because of COVID-19.

“You have to figure out a way to sustain [winning] all the way through [the season]. That’s been something we haven’t been able to do,” Dykes said at the beginning of the 2021.

So this Houston game represents a crossroads for SMU. It could either be the start of a season-defining stretch where SMU takes the turn to being a consistent winner.

Or it will brand SMU as a team that can get close, but isn’t ready to make the jump to being a true contender in a league where one loss can derail a season.

Dykes has made it clear in the past the goal is a championship level team. While SMU has been inside the top 20 of the AP Poll each season, and has won 24 games since 2019, the second half of seasons have been the reason SMU remains on the fridge of relevance.

Notably, SMU has never finished the season ranked since Dykes has been in Dallas. It has also never ended the season on a win.

So, Houston is a test. In year’s past, SMU would have lost this game. This year, we will see.