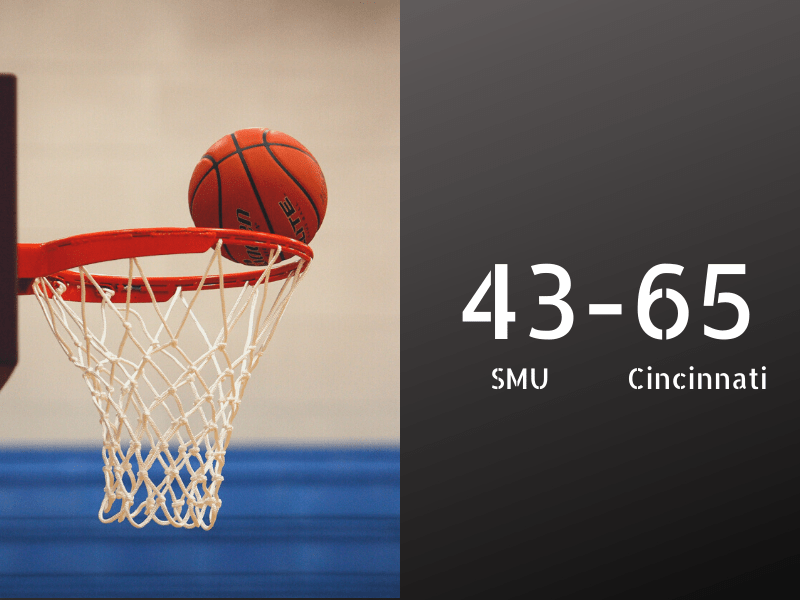 Coming off a three game win streak in American conference play, the Mustangs failed to keep the streak alive against Cincinnati. Within the first couple minutes of Tuesday’s matchup, it was easy to predict how the game would conclude. SMU’s usual top-scorers, Kendric Davis, Isiaha Mike and Tyson Jolly, were unmentionable in the first few minutes.

After hitting under 30 percent of its shots on the night, SMU was unable to meet its expected scoring margin. Before Tuesday, the Mustangs sat at the top spot in the American Athletic Conference for scoring, averaging 76.5 points per game. Up against a stout Bearcats defense, SMU only managed to put up 43 points on the scoreboard.

“That is why when you look around the country you have teams beat teams by 20 and then lose by 45,” SMU head coach Tim Jankovich said. “Sometimes the ball is just not going to go in. If we hit our normal shots maybe we have somewhat of a game. It was a very frustrating night.”

Indeed, discouraging when shots aren’t falling, but another factor may have contributed to Jankovich’s frustration. Early in the first half, three starters went to the SMU bench with two fouls each. Kendric Davis, the conference’s second ranked scorer and leader in assists, failed to make anything all night. The transfer point guard out of TCU ended the game with zero points and just one assist.

“He just had one of those nights and sometimes great players have horrible nights. Emmanuel has been playing great and he couldn’t get himself in the game,” Jankovich remembered. “You have to give them credit because they must have been playing some really good defense because we had our worst offensive performance all year.”

With all the darkness surrounding Tuesday’s loss, there was unexpected spark from the SMU sideline. Sophomore CJ White comes in off the bench as one of the Mustangs’ most undervalued contributors. Against Cincinnati, White couldn’t miss. He went 4 for 5 from the field and 3 for 3 from three-point range in SMU’s dreadful loss.

“When you start a season and you aren’t getting many minutes, and he didn’t start on fire, but he kept working,” Jankovich added. “Guys could go either way and say it is not them or they can just keep working everyday. He has grown a lot and he was just terrific. That was a real bright spot.”

After the Mustangs shake off their loss on the road, they’ll continue conference play against Tulane on Saturday, February 2, at 7 p.m. CT.

Tim Jankovich and his squad will do their best to forget the bad parts of Tuesday’s game and keep moving forward in hopes of taking the American conference title.

“I don’t want to get too caught up in the score. We lost,” Jankovich said. “We need to try to win and fix some things that weren’t good at all. I think we make sure we fix some things but not dwelling on it too much.”