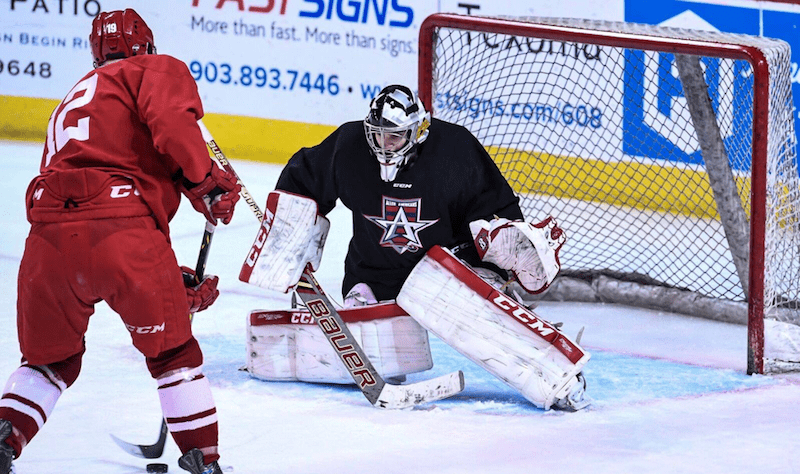 On the other end of the line was the assistant general manager for the Dallas Stars. Thomas Hodges, a junior at SMU, couldn’t believe the news he had just received. He was going to be the emergency goalie for the Stars.

“I was excited, maybe a little nervous too, but it didn’t sink in until my first practice a few weeks later,” Hodges said.

This has been a dream of his ever since he attended his first Stars game when he was 11 years old.

However, he never thought about sports, let alone hockey, until receiving the news his family would be moving to the U.S. because of his father’s job.

“When we were living in England he was working on American time,” he said. “He was up all night and working crazy hours so it was better for us to come out here.”

Hodges is originally from Shropshire, England and spent a majority of his childhood there. He attended boarding school until he was 11 years old. When Hodges found out about the move, he wasn’t thrilled at all.

“I really did not want to move,” Hodges said. “It was not an environment I was comfortable in. I had grown up basically hearing negative things about the U.S.”

When Hodges came to visit the U.S., his family stopped by Stonebriar Mall when he noticed a group playing hockey there. Hodges fell in love with the sport while watching them play. He spent the next six months taking skate lessons in preparation to play hockey once he moved to the U.S. permanently.

“I think it was how my parents bribed me. I think they played up the fact that like ‘look if you come along you will get to play hockey,’” he said.

But when college came around, Hodges decided to quit hockey to focus on his studies. He chose SMU because it was important for him to stay close to home to help his mother, who has been battling cancer for five years. He also wanted to make sure he was getting the best education possible. However, hockey was still on Hodges mind.

“When I decided to make the move to SMU, I was like ‘well maybe I will play for the SMU club team,’” he said.

Hodges, 24, decided to reach out to some coaches for lessons. Originally Hodges reached out to Thomas Speer, then the goalie coach for the Allen Americans, and Mike Valley, who used to be the Star’s goalie coach. However, Valley never got back to Hodges, but Speer did.

“I took some lessons with him, and we got along really well,” Hodges said.

After some time, Speer invited Hodges out to play with the Allen Americans. Eventually, he ended up signing a deal with them.

“They brought me in when one of the goalies got hurt. Then kept me instead of getting a new goalie,” Hodges said. “Because they kept me for an extended period they signed me to a tryout contract.”

Then, the National Hockey League changed the rules. Each team is now required to have an emergency goalie ready to play in case the starting goalie was injured. That’s when the Stars were looking to recruit. The Stars contacted Speer, who recommended Hodges for the position.

Speer, now the National Goaltending Coach at USA Hockey, said he recommended Hodges because when he commits to something he’s all in, like the time he was asked to fill in for the Allen Americans last minute.

“Not only was he there, but he also showed no sign of being nervous,” Speer said. “With about 10 minutes left in the game, head coach Steve Martinson put Thomas in the game. Not only was the opposing team not able to score, he looked confident sealing the win. At that point, I knew he would do a great job being an emergency goalie for the Stars.”

That’s when Hodges got the phone call. Mark Janko, the assistant general manager for the Stars, told Hodges he would be the emergency goalie for the Stars, who are currently in the second round of the NHL playoffs. Janko said there were two things that stood out about Hodges.

“Number one his work ethic and number two his selflessness,” Janko said. “With that position you need somebody who works extremely hard at practice and also realizes that he’s out there for the team and not himself. He understands that and embraces that mentality.”

A few weeks later, Hodges was out on the ice and practicing with the Stars. At first, he felt intimidated and pressured to keep up with the players, but after a while he was able to enjoy himself once he got moving.

“It is a lot of fun. The guys are incredible players, but they are also really great guys who make you feel relaxed and comfortable with the situation,” Hodges said.

Now that Hodges is a full-time student and practicing with both the Allen Americans and Dallas Stars, his schedule can be quite chaotic. Hodges said it can get tough at times when trying to keep both practice and school a priority in his life.

“It’s hard. I mean, you never want to let anybody down, but you got to have your priorities straight,” he said.

Hodges is majoring in journalism and minoring in sports management at SMU. Even though he doesn’t have his heart set on a specific job, he hopes to one day work for the Stars corporate office. As for hockey, Hodges doesn’t plan on stopping any time soon.

“I plan to play for as long as I am competitive,” he said. “When I am no longer able to keep up I will hang up the skates for good.”