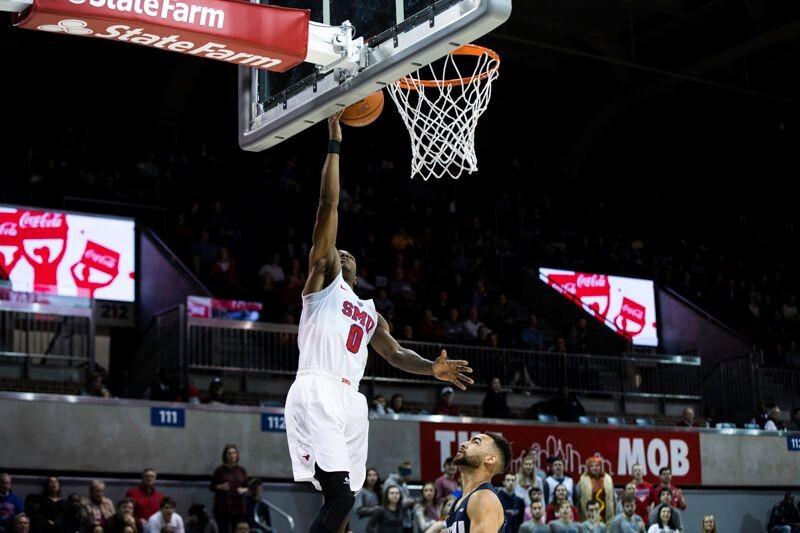 With conference play arriving, the SMU Mustangs appear to be back on track after some rough losses early in the season.

The Mustangs trounced East Carolina 82-54 Wednesday night for their seventh win in their last eight games.

The win was a complete team effort as five Mustangs scored in double figures. Jahmal McMurray led the way with 20 points.

SMU inserted an aggressive style of defense against the Pirates. Tim Jankovich blitzed ECU ballhandlers, as SMU defenders picked them up from midcourt and trapped them when they picked up their dribble or turned their back to the basket. Without a steady point guard, ECU was vulnerable to the pressure, throwing wild passes and going on out-of-control drives that led to turnovers. The Pirates turned it over 15 times on the night and dished just 10 assists.

That pressure helped SMU climb ahead of ECU in the first half. The Pirates scored just four points in the final 4:57 of the first half, and SMU found itself with a 35-25 lead at halftime despite squandering some good looks on offense.

In the second half, McMurray took over to put the game out of reach. The dynamic guard hit back-to-back 3-pointers before releasing for a breakaway dunk, scoring the half’s first eight points in a 49 second span.

The Mustangs did not relent from that point, building a lead as big as 30 points.

While McMurray led the team in scoring, Jimmy Whitt turned in perhaps the most impressive performance. Whitt made seven of eight shots for 17 points, and chipped in four rebounds and six assists along with his normal stellar defense. Feron Hunt has established himself as perhaps the team’s best rebounder as a freshmen, and grabbed 12 in the game.

SMU seems to be hitting its stride at the right time as it looks to get back atop the American Conference.