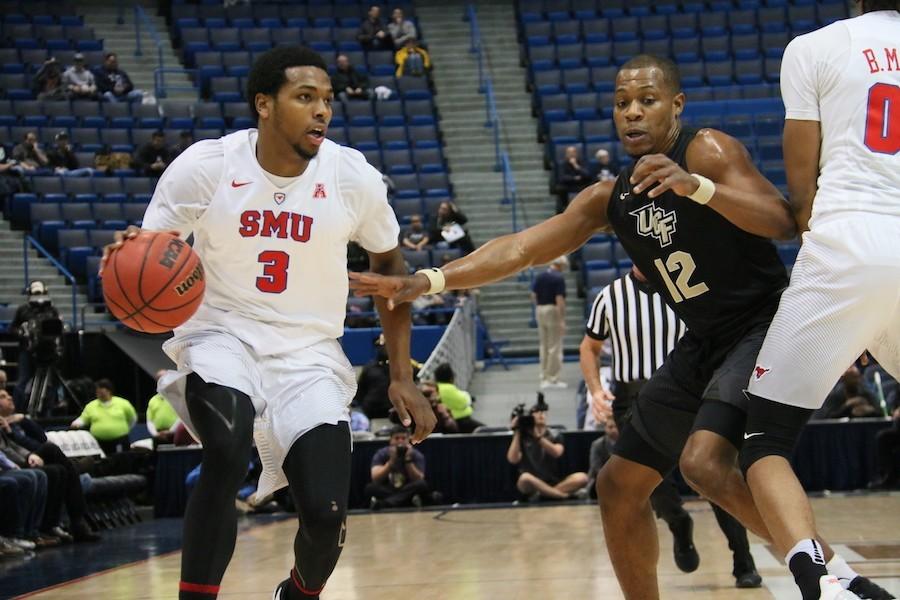 HARTFORD, Conn. – SMU head coach Tim Jankovich said Friday’s narrow win vs. East Carolina was a needed test for SMU. March offers those types of games all the time, after all.

Saturday, however, didn’t offer as tense a game. SMU (29-4) beat Central Florida (21-11) 70-59 in the AAC tournament semifinals to advance to the championship game, where it will play either Cincinnati or Connecticut Sunday at 2:15 p.m.

It was not a game full of aesthetically pleasing offense to start. Neither team shot better than 41 percent from the floor in the first half. UCF shot 40.8 percent overall.

SMU, though, shot 55 percent in the second half. Furthermore, the Mustangs didn’t need Semi Ojeleye to carry them to a win.

As SMU remained calm in the second half, UCF started losing composure. Knights center Chad Brown up-ended Ben Moore as Moore broke away from his front-guard attempt. Brown was charged with a flagrant 1 foul. Moore remained in the game, though he briefly went to the bench about a minute after the hit. He played 35 minutes in total.

Less than 90 seconds later, Taylor was whistled for a technical foul for making contact near the head and chest area of Ben Emelogu.

After that flagrant foul on Brown, SMU went on a 15-5 run that spanned five and a half minutes and gave SMU a 50-36 lead.

SMU willingly attacked Tacko Fall, UCF’s 7-foot-6 wall in the middle. Shake Milton went right at him, before passing off for open shots. Sterling Brown made a floater over him, and later converted a three-point play on which he finished a layup through contact by Fall. Ben Moore also made a put-back layup over Fall.

On the offensive end, Fall scored just five points. He played 28 minutes. SMU frequently double-teamed him by having one defender front-guard him and another back-guard him.

SMU won its fifth straight AAC tournament game. It has not lost a game in the tournament since 2014.

SMU did not score a single bench point against UCF.