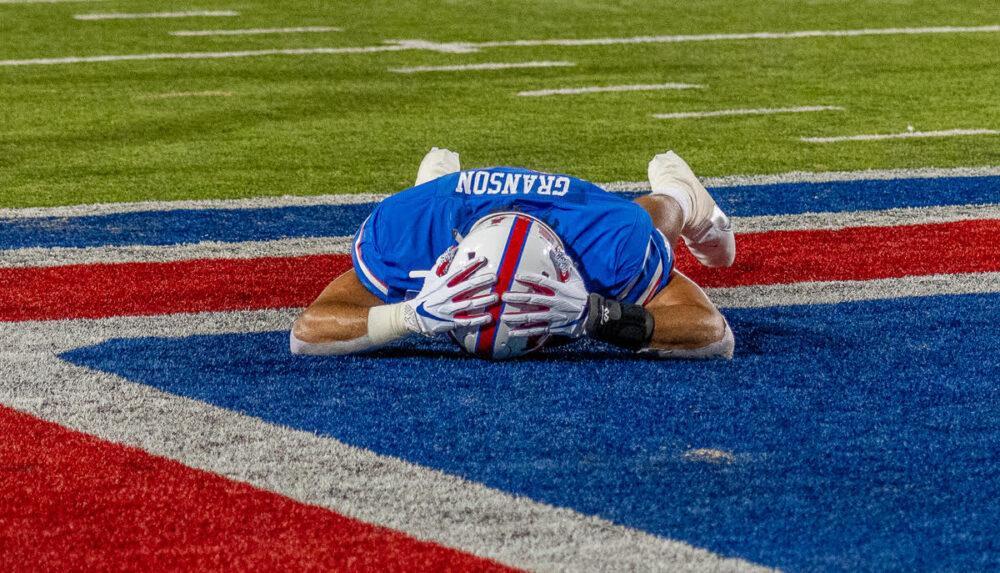 UNIVERSITY PARK, Texas — All Rodrick Roberson could do was tilt his head and watch. The SMU safety had just missed the tackle of Desmond Ridder and lay face-down on the ground as Cincinnati’s quarterback jogged unencumbered toward the visiting fan contingent.

The 32-yard touchdown run served as the dagger, a 28-10 lead too big for SMU to come back from with three minutes left in the third quarter. But more importantly, the visual of Ridder putting the ball up on the railing, pleasing the Cincinnati fans who made the trip, subdued the hopes of an SMU team that lingered within striking distance but could never take a lead.

A 42-13 Cincinnati win was ugly at times, accented with glimpses of competitiveness at others, but, ultimately, was never out of the visiting team’s grasp. The No. 9 team in the country led wire-to-wire. SMU was dealt its first home loss since Nov. 16, 2018, squandering its chance to show it belongs in national prominence.

“It has been a long time since we have gotten our butts kicked like that. It just shows you we have a lot of work to do still on both sides of the ball,” Sonny Dykes said. “We made some progress, are a lot better than we were, but certainly weren’t good enough tonight.”

The milestone game for the program, the first time SMU hosted a matchup of two Top 25 teams since the Death Penalty, resulted in SMU’s largest letdown.

Penalties wiped away big plays routinely. The defense couldn’t get off the field on third down. All of it was compounded by SMU dropping a season-high nine balls, including a Rashee Rice would-be touchdown that could have cut the lead to four in the second half.

After Cincinnati jumped out to a 14-0 lead in the first quarter, SMU’s attempts to climb back into the game were met each time by an opposing touchdown. In the fourth quarter, Cincinnati answered each SMU drive with a score.

The most memorable of those scores was a 91-yard touchdown run by Ridder, who finished with 179 yards and three rushing touchdowns. Before fans could even file out of the stadium, though, a 35-yard touchdown by Gerrid Doaks made a blowout into a 29-point drubbing two minutes after the Ridder score.

“I don’t care who you’re playing. It doesn’t matter if you’re playing McKinney Jr. High. You’re not gonna beat somebody if you drop 10 balls and you can’t get the ball in the end zone,” Dykes said. “I was disappointed with the way we played. We just didn’t do the routine things that we typically do that would have given us a chance to at least be in the game.”

SMU used the second quarter to get back into the game briefly. With two minutes left in the half, SMU had an opportunity to even the score at 14 and was driving inside the Cincinnati 10-yard line.

But Buechele lost track of the clock, and SMU allowed its two timeouts to go unused. Instead of multiple shots at the end zone, 15 seconds ticked off the clock and the field goal unit trotted out on the field. The 14-10 score going into the intermission would be the closest SMU was to Cincinnati the entire night.

“That was on me. I lost track of it,” Buechele said.

It was more than just a poor performance in front of a primetime audience. It was about the conference standings, where SMU once again faltered after a 5-0 start. It was about showing it was deserving of a No. 16 ranking in the AP Poll, a spot that will most certainly tumble after tonight.

In terms of football, too, it was about showing SMU can put up points without TJ McDaniel and Reggie Roberson Jr. The answer to that, at least tonight, was a resounding no.

Buechele limped to go 23-of-44 with 216 yards. SMU had a combined 75 yards rushing as a team. And Kylen Granson, the player Dykes says needs to step up in Roberson’s absence the most, dropped more passes, five, than he caught, four.

“It hurts not having Reggie. If you ask me that question every week from here on out, I will tell you every week that it hurts not to have Reggie,” Buechele said. “But other guys have to step up.”

In the red zone, SMU couldn’t seem to find the end zone. At one point, SMU settled for a field goal down 28-10 in the fourth quarter when it was at the Cincinnati five-yard line. Fans, for the first time in nearly two years, booed the offense off the field.

The only other name not mentioned was Danny Gray, who went down with an injury in the fourth quarter. The wide receiver held his right arm into the locker room and eventually came back onto the sideline. He never reentered the game, however, after a four-catch, 11-yard night.

SMU can still compete for the regular season conference title. It is 5-1 and with a schedule that no longer displayed a Top 10 team on it. But this was the benchmark for the program. This was the test SMU wanted, but a test it could not handle tonight.

“When you get your tail kicked like we did, it is a collective thing,” Dykes said.