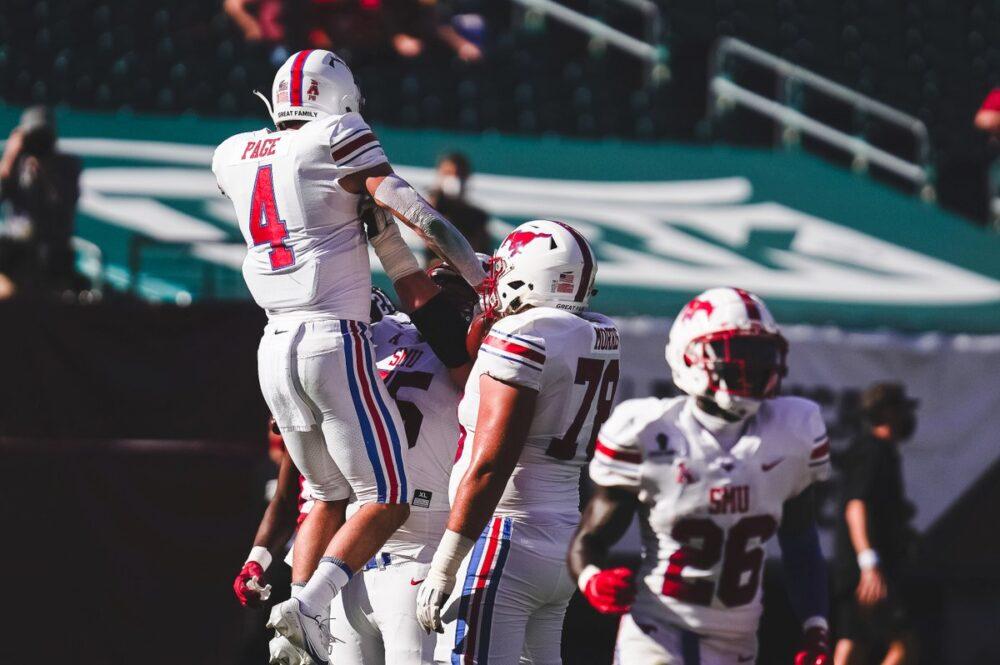 When evaluating SMU’s victories this season, it is important to look at the team’s performance in the trenches. SMU’s successes and failures have been in large part due to the efforts of its linemen on both sides of the ball, a largely overlooked position group.

This year’s defensive line features returning players as well as a few new faces after the loss of key contributors such as Delontae Scott, Pono Davis, and Demerick Gary.

Returning defensive tackles Elijah Chatman and Terrance Newman have made a significant impact on the interior line this season, combining for 9 tackles for loss. Senior transfer Mike Williams and junior college transfer Junior Aho have been a consistent part of the interior line rotation as well. Junior defensive ends Turner Coxe and Gary Wiley been manning the edge with Toby Ndukwe getting looks as well.

The group has struggled to stop the run and rush the passer at times this season, especially against top AAC teams. The defensive line arguably had its worst game Week 7 against Cincinnati, allowing 313 rushing yards on 8.9 yards per carry, with Bearcat QB Desmond Ridder scoring 3 touchdowns on the ground. The Mustangs also struggled to stop the run against Memphis despite the victory.

Although the defensive line has been inconsistent at times, it bounced back well from the loss to Cincinnati against Navy last week. The Mustangs held the run-oriented Midshipmen to only 4.2 yards per carry on 45 attempts while also benching their starters near the beginning of the fourth quarter.

Despite the recent success, the team is still waiting for the emergence of a premier pass-rusher.

“We’ve shown promise at times but we just haven’t had that guy yet that consistently applies pressure” Dykes said.

On the other side of the ball, the offensive line is one of SMU’s most experienced position groups returning four starters in left tackle Jaylon Thomas, left guard Hayden Howerton, Center Alan Ali, and right tackle Beau Morris. The lone newcomer is right guard Danielson Ike, a transfer from the University of Oklahoma. Guard Justin Osborn and lineman Cameron Ervin also play contributing roles, often rotating in with the starters.

The offensive and defensive lines appear to experience coinciding highs and lows as the offensive line was similarly dominated at the line of scrimmage by Cincinnati. The Mustangs were out gained 75-to-313 on the ground despite rushing 4 more times than the Bearcats as they averaged a dismal 1.9 yards per rush on 39 attempts. It also struggled to protect the passer, allowing 5 sacks on Buchele. This game, however, is an outlier amongst a series of solid performances this season.

The offensive line responded well to their struggles against the Bearcats with a historic outing against Navy. For the first time since 1998, SMU out-rushed Navy with a total of 255 rushing yards to Navy’s 191. SMU averaged an impressive 6.9 yards per rush while also only allowing one sack on Shane Buchele all game. Sonny Dykes heaped praise onto the group, stating that the Navy game was “Our best game upfront in our three years here,” while adding that there is still room for improvement, saying “I still think we’re capable of playing better.

After a dominant performance all-around against Temple in last week’s blowout victory, SMU will be tested on both sides of the ball. The defensive line will need to make big plays stopping the run in order to slow down a solid Tulsa running game that averages 169.8 yards per game on the ground. The offensive line needs to protect Buchele and allow time for SMU’s receivers to get open against Tulsa’s elite secondary that has allowed only five passing touchdowns in their last four games. If the Mustangs can win in the trenches, it will greatly help their chances of coming home with a win.