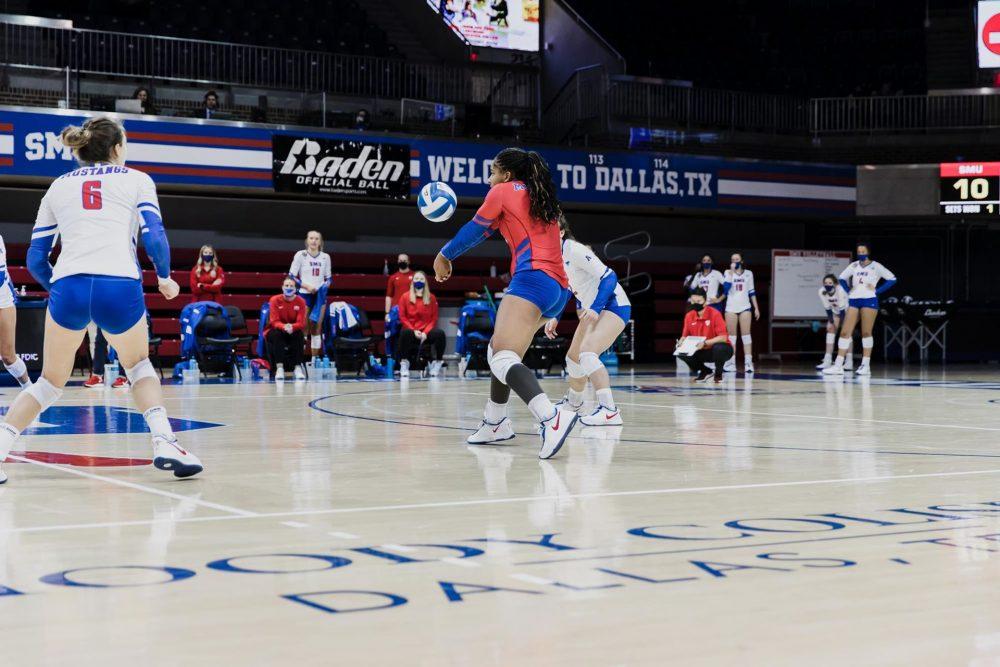 SMU was taken down by Houston in its first conference game at Moody Coliseum in Dallas, Texas. In the absence of Heim and another starter, both out due to COVID-19 protocol, SMU fell to an undefeated Houston team, but not without a fight.

The first set started 5-1 in Houston’s favor, but the Mustangs remained persistent, bringing it back to 21-19 near the end of the first. This was largely thanks to Mikayla Miller and Bria’ Merchant, who stepped up on the defensive end, each notching 12 digs by the end of the game. The Cougars proved to be too much, however, winning the first set 25-19.

Houston was so dominant because of its frontcourt and wing spikers, like Abbie Jackson and Courtlyn Henderson, who combined for 22 kills. Jackson had 18 digs to go alongside her 17 kills, which displays just how versatile of a player she is on both ends of the floor.

Jadyn Bauss and Alex Grover put up similar numbers, hitting 14 and eight kills respectively, to match Jackson and Henderson. However, they did so with much less efficiency. While the Mustangs’ two hitters averaged a percentage near 0.25, the Cougars’ had percentages of 0.375. This gap indicated how much stronger Houston’s offense compared to SMU’s, which couldn’t function without Heim.

Zairyn Hemsley did step in nicely, however, totaling 28 assists, a new career-high. But she wasn’t putting up assist totals or making the defense work like Heim, who is recognized as one of the AAC’s best offensive engines.

Hannah Jacobs also struggled against the Cougars’ defense. Usually attacking balls all over the court and serving as SMU’s primary offensive weapon, she had an unusually off-night. Her hitting percentage was -0.053, while she had only five kills on almost 20 total attempts for the evening.

Houston’s defense troubled SMU’s attackers behind libero Torie Frederick, who had 20 total digs, and Sarah Martinez, who clocked in 12. These digs were a large factor in keeping the ball in play, which helped the Cougars prolong rallies, set up their offense, and take advantage of SMU.

SMU couldn’t put up with the Cougars’ runs and lost the game in three sets. The Mustangs face Houston again on Friday, February 12 at 5 pm in Moody Coliseum.