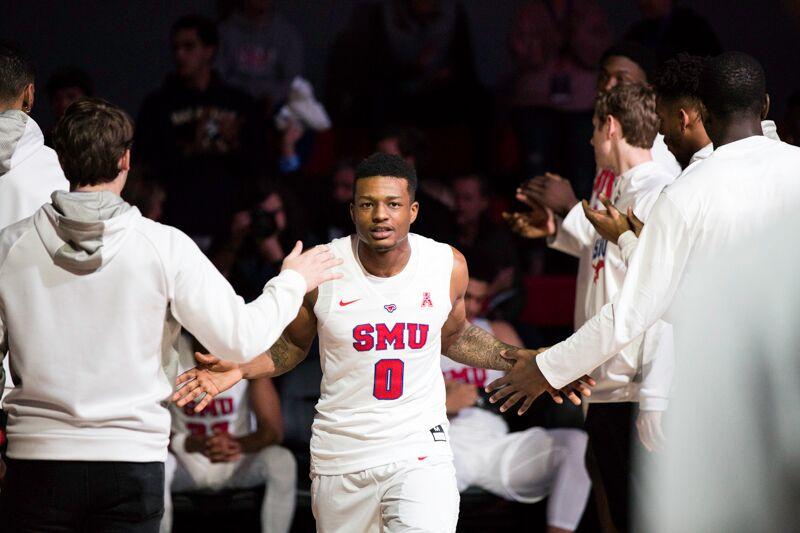 For the final 36 minutes of its 69-58 loss to the conference-leading Houston Cougars, the SMU Mustangs were without Jarrey Foster.

The senior forward went up to grab a rebound and came down awkwardly, hobbling for a second before sitting down on the floor and grabbing his surgically-repaired left knee, the same one that he tore in high school and last season. After having it checked out on the sideline, Foster retreated into the locker room, briefly retuning to ride the exercise bike before going back under the stands.

“We know that it was more than, say a bruise or something or else he would have gone back in,” Jankovich said. “We’ll do all those tests and everything and know as soon as we can get all that back.”

“There’s no substitute for an outstanding senior player,” Jankovich said. “He’s such a good leader and such a good winner. He understands the game inside and out and keeps everything organized on the court. He’s another coach on the floor… He’s invaluable to us.”

In the minutes that followed Foster’s injury, it was the team’s shooting that was most affected. Save for Jimmy Whitt, not a soul could make a shot. Whitt was the only bright spot. He scored the first ten points of the game for the Mustangs, and finished the night with 20 points on nine of 11 shooting. That shooting line is nothing to scoff at, but it was all the more impressive considering Whitt was battling an illness that left him limited in pregame shoot around.

“I hope he doesn’t feel that well for a lot of our games,” he joked. “I couldn’t be more proud of him.”

Armoni Brooks carried the load for Houston in the early part of the game. He had 14 first-half points, 12 of which came via the 3-pointer. That was a theme for the Cougars in the first half. SMU was playing them tight and forcing long possessions, but Houston kept making 3-pointers late in the shot clock.

“[Brooks] was the story of their first half,” Jankovich said.

After SMU cut Houston’s lead to three points in the final moments of the half, Galen Robinson Jr. did exactly that, banking in a 3-pointer from some 25 feet out as the horn sounded on the shot clock. With six seconds left in the half, Brooks hit his fourth 3-pointer of the half, giving the Cougars a 31-22 lead at halftime.

There was one bright spot, however. Houston shot just 32 percent from the field in the first half and inside the 3-point line, it shot 23.5 percent.

But that changed in the second half, thanks to Houston guard Corey Davis Jr., Brooks’ partner in the backcourt. He was able to take advantage of a defense keying on Brooks and the 3-point shot, hitting his first seven shots of the half en route to a 20-point night. His efficiency spread to his teammates, as Houston nearly doubled it’s shooting percentage in the second half.

Meanwhile, SMU continued to struggle offensively. Houston increased its lead to double-digits just thirteen seconds into the half, and it remained there for the better part of the second half.

While Whitt didn’t carry the majority of the load in the second half, SMU had a hard time getting its shooters going. The team’s leading scorer, Jahmal McMurray, was just three for 14 from the floor.

“[They] guarded the heck out of him,” Jankovich said. “Davis really did a heck of a job.”

Forward Ethan Chargois had a double-double, but shot just 25 percent from the floor. The team just couldn’t keep up with Houston when it came down to making shots and that’s what sank them.

SMU cut Houston’s lead to nine with just more than two minutes left in the game, but couldn’t sustain one final run.

After the game, the attention was turned back to Foster. Jankovich wasn’t looking at the loss to Houston, but rather the big picture. Once again, the team was looking at life without Foster. Once again, Foster was dealing with a knee injury. When asked to sum up his emotions, Jankovich said he was “devastated.”

“Games are incredibly important but sometimes the personal side of things are even more important,” Jankovich said. “I watched the guy tear an ACL in January of last year and work so hard to get himself back to play this year. And he gets himself back to play and tweaks it. It’s just heartbreaking that we have to have this conversation again, honestly.”