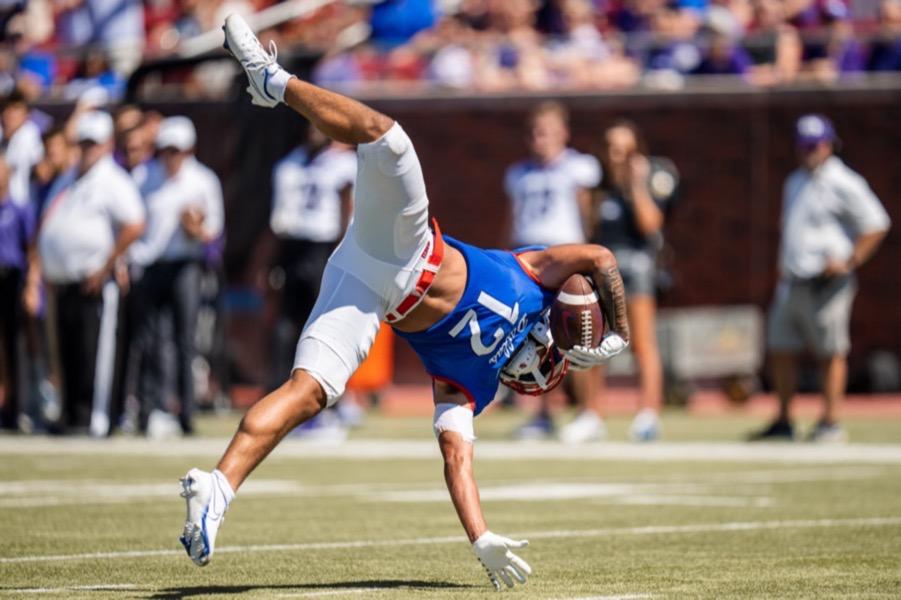 “We’ve got a locker room full of really hurt guys. At the end of the day, it came down to that fact that they [TCU] made the more explosive plays,” he said.

TCU began the first quarter scoring two quick touchdowns, one of which was within four plays from kickoff and after an SMU turnover. SMU clawed back in the second quarter, with Tre Siggers and Rashee Rice scoring once each to bring the game to 28-14 by halftime.

The third quarter produced an inspired performance defensive effort from SMU, and it was rewarded by another Siggers touchdown drive, bringing the game to within seven.

Things turned for worse later though, and SMU were outscored 14-13 in a pivotal fourth quarter that saw yet another SMU turnover lead to a TCU touchdown, and another run (63-yards) converted by TCU.

“I think we knew they were going to come out fast,” Lashlee said. “The killer was that they had those two long touchdown runs.”

Again, Saturday’s tactic was centred around SMU quarterback Tanner Mordecai and his passing ability. Early in the second quarter, Mordecai seemed to have taken a hit and was pulled out of the game for treatment before going back in minutes later. Despite the knock, Mordecai managed to throw for 372 yards, completing 27 of his 49 passes, including two touchdowns and two interceptions.

Like earlier games against Lamar and Maryland, SMU’s running game and defensive play were called into question against TCU this Saturday, as the team fell short in both key categories on the field.

But unlike those games, SMU ran the ball on Saturday against TCU – or at least tried to. With 37 carries for 104 yards, including 67 yards and three touchdowns for running back Tre Siggers, SMU struggled to make gains running the ball, suggesting the passing game is the only option for this team.

Speaking on the running game, Lashlee said he felt the team ran the ball more effectively than it seemed.

“We had to take what the defence was giving up. That’s what that defence makes you do, makes you have to be patient,” he said.

SMU Wide Reciever Jake Bailey had an impressive game following his return to the team, ending the game with 163 yards, eight receptions, and one touchdown.

Bailey is still battling with the shoulder injury that kept him out of the first two games, Lashlee said.

“I’m not surprised with the production from him [Bailey]. I’m pleased he was able to stay in there since we missed him in the first few weeks. Jake’s really experienced, and he helps take a lot of pressure off the other receivers in the team.”

Rashee Rice had a much more quiet day than usual, finishing the game with 74 yards and one touchdown on 13 receptions. His only touchdown was the fifth he had received from a Tanner Mordecai throw this season.

This is the first time SMU has faced it’s former coach, Sonny Dykes. The knowledge he had of SMU’s players and their weaknesses could have possibly given TCU an advantage in this game, said Paul Nelson, SMU defensive end.

“They definitely know us, especially the coaches, and they spread out information on our weaknesses,” he said.

Saturday’s game handed Lashlee his second loss of the season, and while the fans may be gutted to have lost the Iron Skillet game, Lashlee believes now is time to move on and focus on conference play, which was the team’s goal from the start of the season.

“Our number one goal has always been to compete for our conference championship. That season starts now,” he said.

This loss ends the Mustang’s two-game win streak in the Iron Skillet series, and for the first time since 2018, SMU won’t start the season 5-0. But one is not to dwell too long on that.

“We’re not happy being 2-2, we’ve played two really good teams in one-score games and could’ve put ourselves in a position to win those games and we couldn’t do it,” said Lashlee. “But we have a good football team and we would go on to prove that.”