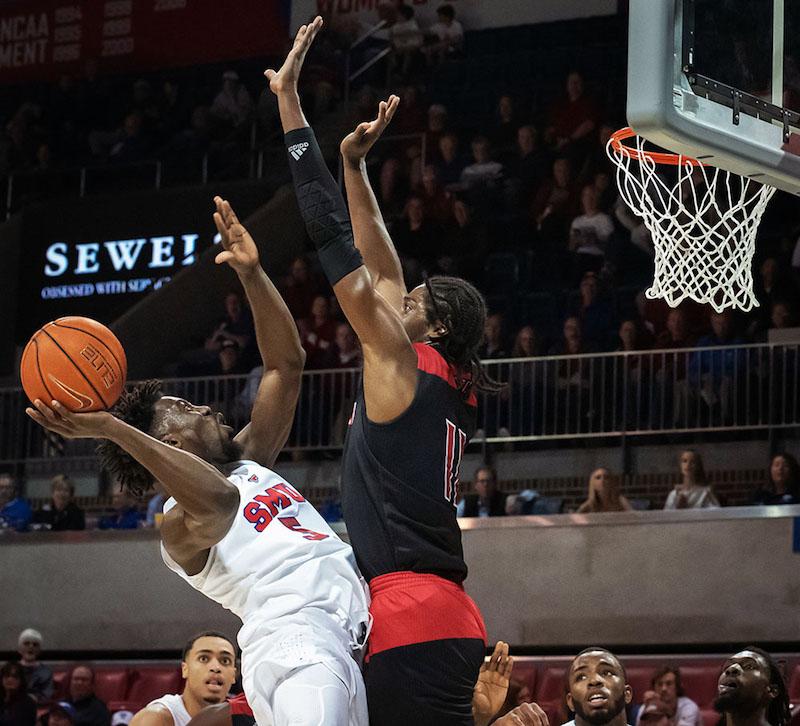 The Mustangs came out strong, as Emmanuel Bandoumel scored the first basket of the game and the season for the team off an assist from Isiaha Mike.

After leading for the entirety of the opening half, the Mustangs went into the locker room at halftime with a 15-point lead. In the second half, the team did not let up. SMU would dominate on both offense and defense coming out of halftime, scoring six unanswered points in the first two minutes, causing the Gamecocks to use their first timeout. After the break, the Mustangs scored four more before JSU could make its first basket of the half.

With under 10 minutes to play, the crowd erupted as Ethan Chargois threw up an alley oop for Mike to put the Mustangs up by 15. In the end, the Mustangs took home the 74-65 win, as President George W. Bush sat court side cheering on the team.

Jolly finished with 21 points, eight rebounds, three assists, and two steals. Behind him in points was Mike with 14, Hunt with 13, and Chargois with 10. Freshman Charles Smith IV stepped out on the court for his first minutes of college basketball Tuesday. He tallied five points for the Mustangs.

The team will be back in Moody Coliseum on Tuesday, November 12 to face New Orleans at 7 p.m. The game will be broadcast on ESPN3.