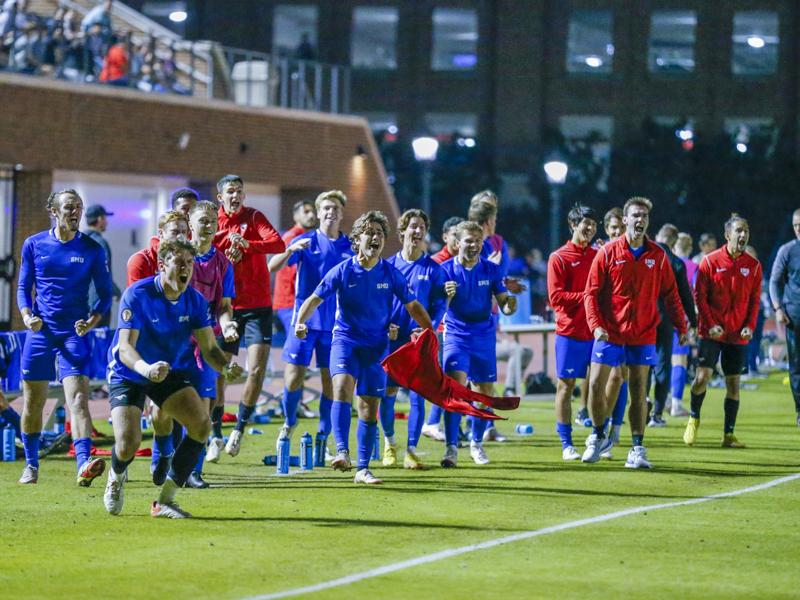 DALLAS, TEXAS – The SMU Men’s Soccer team finished regular season play on Wednesday night with a crucial win against rivals Tulsa, sending them to the AAC tournament with a first-round bye. Washburne Stadium was filled with 1,600 fans who cheered on the Mustangs and their six graduating players playing one last time on home turf.

SMU finished the regular season undefeated at home, winning eight of those nine games. Overall, they finished 6-3 in conference play and 10-4-1 in total. The win against Tulsa secured a 2nd place finish for the Mustangs, finishing just one point short of first-placed FIU, which SMU had beaten in September.

After suffering a close 1-2 defeat at Florida Atlantic last Friday, the Mustangs knew they needed a win to finish well in a crowded conference. They bounced back in timely fashion, defeating the reigning AAC tournament champions in a hard-fought 3-2 game. Just three points – one win – separate the top five teams of the AAC, showing just how important last night was for SMU.

Tulsa started off the match strong, controlling most of the possession early on. However, it was SMU that made the first impact, with midfielders Roman Knox and Harvey Castro both having close-ranged shots saved by Tulsa goalkeeper Alex Lopez in the 11th minute. Then, following a handball in the penalty box, a penalty kick was awarded to SMU in the 16th minute, which midfielder Knut Ahlander calmly converted to the bottom right.

Tulsa responded quickly just two minutes later on a counter-attack, as forward Alex Meinhard made a strong run and beat SMU goalkeeper Bram Kaarsgaren in a one-on-one situation. However, a pair of SMU goals before the end of the half eventually proved enough to seal the game.

In the 36th minute, a cross from defender Kyran Chambron Pinho from the left corner found Ahlander in the box, whose perfectly placed one-timer found the back of the net. It was his second goal of the night and 12th of the season, a team high.

Although it was Senior Night, it was a pair of freshmen who shined three minutes later, as winger Alexander Petraeus’ nifty run along the goal line created an open shot for winger Fredrick Skilberg, who gave SMU a commanding two-goal lead heading into the break.

For Ahlander, a graduate student serving as SMU’s captain, he credits the young members of the team for their development through the season. He has seen them growing more comfortable in their positions, and “taking more and more responsibilities which we need in such a young team.” Last night, seven of SMU’s eleven starters were underclassmen.

Tulsa’s penalty kick goal just four minutes into the second half ensured tensions would be high as SMU tried to preserve their slim lead for forty minutes. SMU was outshot 4-12 in the second half (11-17 in total), in a feisty game where nine yellow cards were given – six of those to SMU. A strong defensive performance from the Mustangs prevailed, maintaining the 3-2 score line to end the game.

“I feel amazing”, said Kaarsgaren afterwards, who recorded five saves. However, the senior from the Netherlands notes there’s still much work to be done. “We didn’t lift any trophies this year yet, so obviously we enjoy tonight, but a lot to play for still.”

Looking ahead, SMU will hope to claim the AAC tournament championship, which they last won in 2019. Thanks to their first-round bye, they will enjoy some extra time off before they head to Miami to face the winner of #3 seeded South Florida or #6 Charlotte. The game will take place at 3 p.m. on November 10th at the home field of FIU, streaming live on ESPN+.

“This is the time of the year where every game matters a lot, and every game is a huge upside or huge downside”, says Ahlander, “I’m very excited for the pressure.”