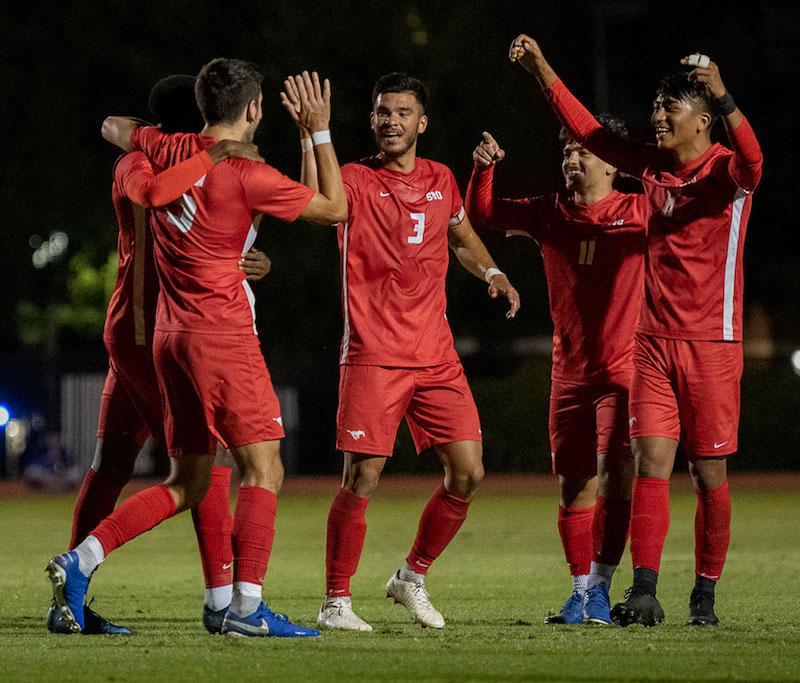 In an exciting double overtime finish, the Mustangs defeated Coastal Carolina 1-0, sending them on to the next round of the NCAA tournament.

Hundreds of fans piled into Westcott Field to cheer on the No. 8 Mustangs, who were named the American Athletic Conference Champions for the third straight year last week after a 1-0 win over UCF.

The Mustangs kept the ball on Chanticleers’ side of the field for most of the match, however they were unable to put one away during regulation. SMU outshot Coastal Carolina 26-14 in the match.

Late in the second half, Knut Ahlander took a shot, hoping to put the game away for the Mustangs. Ahlander has been a key member of SMU’s offense this season, recording 7 goals and 10 assists this year. His shot sailed past Coastal Carolina’s goalie, but hit the cross bar and bounced out of the goal, continuing SMU’s scoreless game.

Both SMU goalie Grant Makela and Coastal Carolina goalie Alberto Ciroi recorded five saves for their teams. With their relentless goal tending and the hustle by both sides’ defenders, neither team conceded a goal during regulation, sending the game into a golden goal overtime.

SMU dominated the first 10 minutes of overtime taking four shots on Ciroi, while the Chanticleers had none. Despite the shots on goal, Ciroi did not allow any of these shots into the net. But, the second overtime was different.

After two SMU shots in the second overtime, Ahlander took another shot at Ciroi who deflected the ball, sending it rolling towards senior Garret McLaughlin. McLaughlin sent the rebound flying into the back of the net, sealing Coastal Carolina’s fate.

WATCH: McLaughlin buries the rebound for the GOLDEN GOAL! On to the @NCAASoccer Sweet 16!#PonyUp pic.twitter.com/H2YLTD4Bwf

The crowd erupted as the SMU players rushed onto the field celebrating their 17th win of the season. Next, SMU will take on a familiar American Athletic Conference opponent in the round of 16 in the tournament, No. 9 UCF. This will be the third meeting between the two teams this year. This season, SMU is 1-0-1 against the Knights.