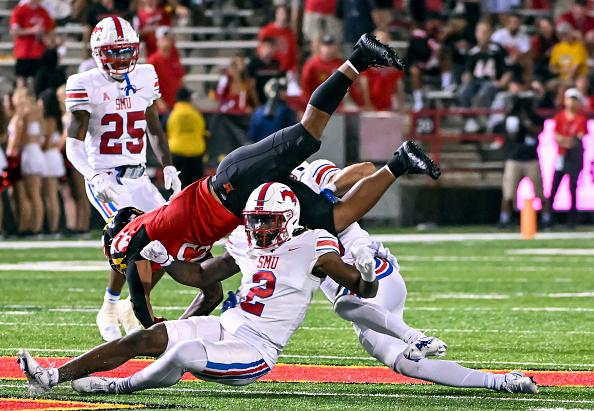 Rashee Rice had another fantastic day with 193 receiving yards, play after play with impressive catches, and Tanner Mordecai threw for 369 yards, but it wasn’t enough. The Maryland Terrapins were able to clench the win 34-27.

Heading into the second half, the Mustangs held onto a narrow three-point lead with a score of 20 -17 – dominating possession and playing quickly. As the Terrapins received 15 penalties over the course of the game resulting in giving up over 100 yards, calls ranging from false starts to unsportsmanlike conduct, it seemed like the Mustangs were going to leave College Park triumphantly.

Leading at the end of the first, second, and third quarters of the game, the Mustangs showed Maryland some real horsepower, pun intended. The fourth quarter sadly ended differently. After an unfortunate interception and several incomplete passes by Mordecai, the Terrapins were able to pull ahead for the win.

Coming off this Maryland loss (and a TCU bye week), the Mustangs – and the entire DFW metroplex – look forward to an 11 a.m. kick-off versus crosstown rivals the TCU Horned Frogs. The Battle for the Iron Skillet comes home this year for the first time since 2018 as Rhett Lashlee’s Mustangs will face former SMU head coach Sonny Dyke’s Horned Frogs in a game you won’t want to miss. Pony up, Mustangs!