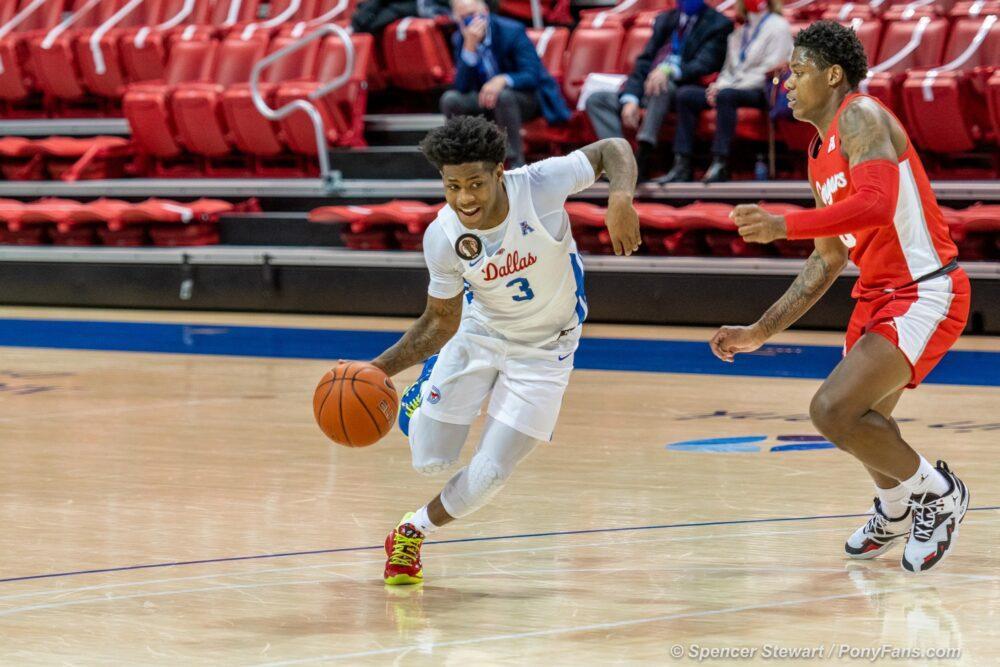 UNIVERSITY PARK, Texas — Kendric Davis was setting up for a play SMU had run seemingly 15 times.

It was the type of play SMU lives off of. Ethan Chargois was setting up for the screen by the SMU logo. Davis was dribbling to his left. And, as he had done time and time again, Davis tried to drop a bounce pass to Chargois.

But this time, with SMU down eight with five minutes left, the pass was low. Davis looked tired. And instead of the ball finding Chargois, it landed in the hands of Houston guard Marcus Sasser. The rest of what ensued — the Sasser fast break layup, the 10-point deficit, the 74-60 loss — felt inevitable.

All of it was emblematic of a team that had run out of gas against the No. 5 team in the country.

“We didn’t have the same energy in the second half… we never really settled in,” SMU head coach Tim Jankovich said. “The offensive rebounding was (an issue.) That is why I am so disappointed.”

This was the benchmark game for SMU. Coming into the night with an undefeated record, SMU finally got the chance to play a team with a tested resume for this season. It may have been more than that, too, with SMU trying to use this game as a measuring stick against the conference champions from a year ago.

And, for most of the night, SMU looked the part of a team that deserved to be in the same breath as a nationally ranked Houston. The Mustangs stayed within five points for most of the game. The lead changed hands on eight different occasions. SMU even went into the intermission with a one-point lead.

SMU had moments of separation. In the first half, SMU capitalized on Houston’s two leading guards leaving out with two fouls and Houston coach Kelvin Sampson was forced to play freshman guard Jamal Snead for 10 minutes.

In short, it did what good teams do: take advantage of weaknesses. Charles Smith IV and Emmanuel Bandoulmel anchored the defense in the front court. Kendric Davis outmanned the freshman. SMU led for four minutes and change.

With just four minutes left in the first half, Ethan Chargois threw up a lob dunk for Feron Hunt. It gave SMU a five-point lead and its largest of the game.

“We played a pretty good first half,” Jankovich said. “We could have stretched the lead in the first half. Even though I didn’t think we played great, we had a lot going for us.”

But SMU couldn’t sustain the effort. The deficiencies that SMU tried to mask in the first half — things like offensive rebounding, finishing around the rim and transition points — didn’t hold up as Houston went back to full strength with Quientin Grimes and Sasser.

There was the offensive rebounding issue, where Houston corralled 18 second chances on the boards. That may have been the defining stat of the night, SMU just unable to keep up with the length and physicality of Houston for 40 minutes.

“I should have done better on the boards,” Feron Hunt said. “By me being the main rebounder, I should have had more than I had. So it’s my fault. I’ll take accountability for that.”

Isiah Jasey was unable to stay on the floor, struggling to finish inside. The senior played just nine minutes, three in the second half, after he missed two layups back-to-back. Jankovich was forced to call a timeout, as Jasey’s misses spurred a 13-3 Houston run, and Jasey never reentered the game.

There was also the guard problem. Grimes scored all of his 11 points after the break, after playing just seven minutes in the first half, and SMU struggled to get stops. The answers for SMU, at least offensively, didn’t seem to be there.

Bandoumel finished 1-of-9 from the floor and had two points. Davis had 23 points but an uncharacteristic four turnovers. Still, his effort was the gem of SMU’s day. Hunt had 12 points and 12 rebounds.

“The second half, I just liked our execution, I liked the ball movement and I liked our rebounding. We looked like a Houston basketball team,” Sampson said.

If this game gave SMU a chance to see where it is, with its best win in this 7-0 start at Dayton on Dec. 5, it showed it can compete.

“It is too early in the season, three games into (conference) to really know where we are,” Jankovich said. “There is a lot of season left.”

Davis took a similar tact.
“I think we’ve got bigger goals than just beating them,” Davis “We want to win the conference, and we obviously know they’re one of the teams you have to get through. But, we think we can fight for a national championship. People might call us crazy right now, but we’ve got everything at every position that says we can do it.”