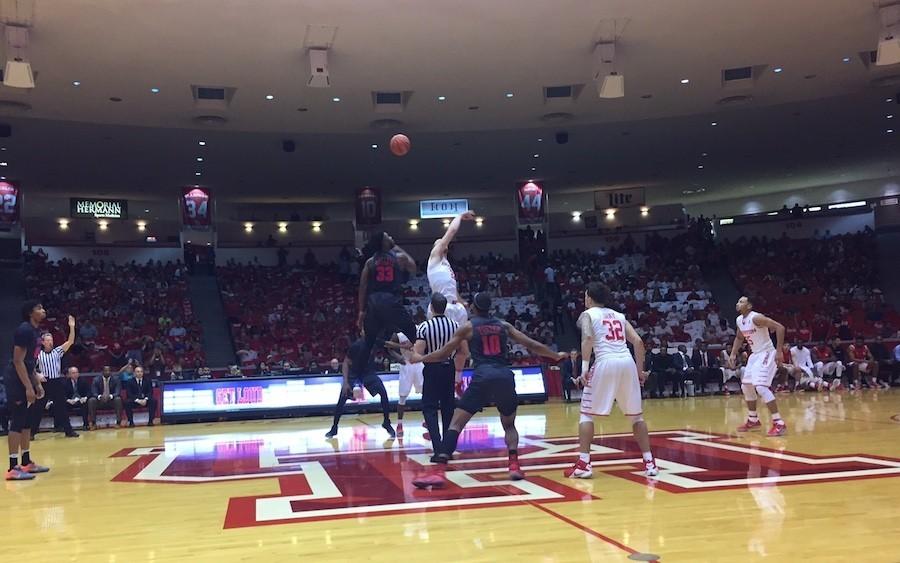 HOUSTON – In its final weeks before renovation, Hofheinz Pavilion hosted one of its most anticipated games in years.

The only problem, though, was it resulted in a loss for the home team.

Of course, that’s not a problem for SMU.

Neither team led by more than eight points in the second half, until the final 30 seconds.

Semi Ojeleye paced SMU with 22 points. Ben Moore added 18 points and 13 rebounds. Each of them played all 40 minutes. Sterling Brown, despite shooting 4-for-16 from the floor, scored 16 points and made all of his seven free throw attempts.

Offering some symmetry to Wednesday’s 80-75 win vs. Tulane, SMU trailed for nearly 18 minutes in the first half and the first 11 minutes of the second half. It trailed 30-26 at halftime.

“We love to compete,” SMU guard Ben Emelogu said. “We see the scoreboard and think, ‘We need to make a run.’ Some teams spread apart, but we get closer together.”

SMU took its lead with the help of four Houston fouls in a span of 46 seconds. That put SMU in the bonus with 12:40 to go. Rob Gray, who was responsible for all eight of Houston’s second-points at the time, went to the bench with four fouls of his own. In the six minutes he sat out, Houston scored seven points.

“That certainly helped us,” SMU head coach Tim Jankovich said. “You always like to see some of their top scorers sitting on the bench for a while.”

Emelogu, playing point guard with Shake Milton in foul trouble, made a 3-pointer to give SMU the 41-40 lead with 10:59 left. Before his 3, SMU hadn’t held a lead since the score was 2-0. Moore and Brown followed with jumpers to give SMU a 45-41 advantage.

Galen Robinson’s layup capped a 10-4 Houston run that tied the score at 51, but he missed a free throw that would have completed a 3-point play and given Houston the lead. Sterling Brown responded with a 3-pointer, followed by a pair of Semi Ojeleye free throws.

For a moment, the game looked like it would become a Houston blowout. The Cougars made four of their first eight 3-point tries and held a 24-11 lead at the 7:23 mark of the first half.

“They played as sharp as could be offensively,” Jankovich said. “I could see it in three possessions. They were really tight on their stuff.”

SMU then switched to zone defense and held Houston to 20 percent shooting (2-for-10) for the rest of the half.

SMU’s first half, meanwhile, was the opposite. Houston played aggressive, tight defense and prevented SMU from getting clean shots. The Mustangs started 4-for-14 from the floor and didn’t make a 3-pointer until 5:21 left in the half.

“It was the first time all year – and I certainly don’t think it was selfish – but I thought we took a lot of bad shots,” Jankovich said. “I just thought we were settling, impatient and just shooting guarded shots.”

“You have to give them credit too. We couldn’t find easy shots either.”

A 15-2 SMU run erased the 24-11 deficit, but Houston closed the half with four straight points to take a 30-26 lead into halftime.

SMU, again, won with largely a six-man rotation. Dashawn McDowell, healthy after missing two games with a concussion, did not play in the game. Jonathan Wilfong played for a few seconds at the end of the first half.

“We always got the juice,” Emelogu said. “That’s what coach talks about. We do a good job taking care of our bodies.”