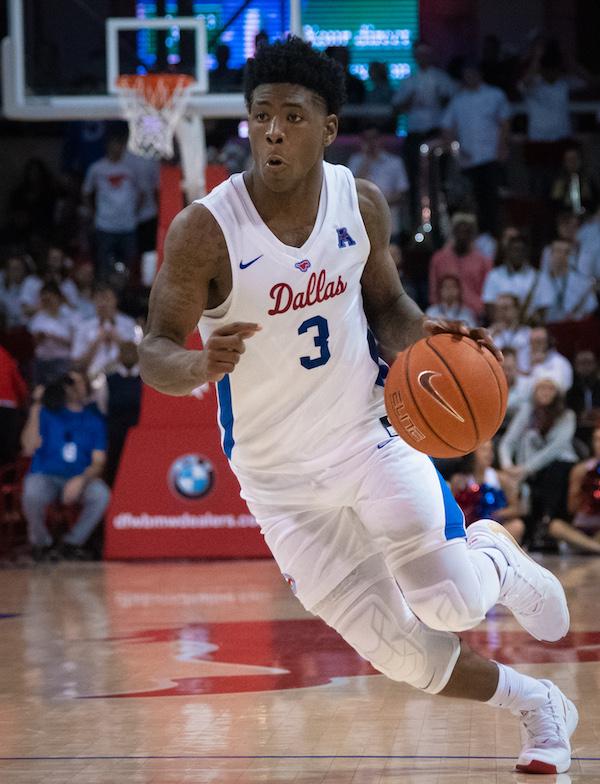 It took only forty-five seconds to understand ECU would be overwhelmed inside of Moody Coliseum. On the opening offensive possession of the evening, a wide open Tyson Jolly buried a triple that did not even glance the rim. SMU then proceeded to hit another, then another and another.

The Mustangs really never stopped making shots as the hosts climbed towards a historic offensive display. In what was the second most three-pointers made in program history, SMU rattled in 15 triples on 48 percent shooting. All of this was enough to be an emphatic stamp on an 84-64 rematch victory over ECU.

The Mustangs built a double-digit lead almost immediately in the contest, taking just over five minutes to put together a comfortable advantage. SMU spent the remainder of the night mostly inching closer to a 20-point advantage. In every statistical category, and from every player in the box score, SMU got production on levels that proved to be season-highs.

“I loved our team tonight. It was our best offensive game of the year. Best ball movement, best execution, best spacing and best basketball we have played all year without question on the offensive end,” SMU head coach Tim Jankovich said.

Against a zone, man-to-man, press, it was all working for the offense. As SMU generated open looks, a smattering of players were eager recipients. All nine players in the rotation scored at least three points, something that even pleasantly surprised Jankovich.

Even when the shots did miss, SMU got the ball right back. Seven first half offensive rebounds, and 11 overall, gave the Mustangs 15 second chance points, a category that exaggerated what was already a lopsided matchup.

“It says that we are playing right. It is saying we are playing the way I picture us playing,” Jankovich said after SMU picked up its 14th win of the year.

ECU briefly fought themselves back in the game after going down 18 points late in the first half, but the Mustangs fended off the short lived challenge. A 9-1 run early in the second half gave some flashbacks of ECU’s second half comeback in the last encounter, but Kendric Davis put the final nail in the coffin of a game that SMU nursed to the finish.

Huge win thanks for all the Pony support ???.

With 14 minutes to play, Davis delivered a one-two punch that put away the Pirates. Kissing a ball high off the glass for an old-fashioned three-point play on one end, Davis proceeded to throw a reverse dunk lob to Feron Hunt that put a definitive end to the night.

Jolly led the way for the Mustangs, knocking down five triples en route to a team-high 17 points. Not to mention his plus-minus which landed him a plus 25. But for all the production he gave, it was the bench that really had its say for the first time all year.

With a season-high 33 bench points, CJ White and Charles Smith IV made their presence known. White was a perfect 3-3 from the field and had nine points. Smith also hit a three and played some of the most minutes of his career. For everything going on, Jankovich was all too excited to brag on those two.

The win itself moves SMU to 14-4 on the year and 4-2 in the American Athletic Conference. Big picture, it gives the Mustangs breathing room for a road trip that included bouts with Memphis and Cincinnati.