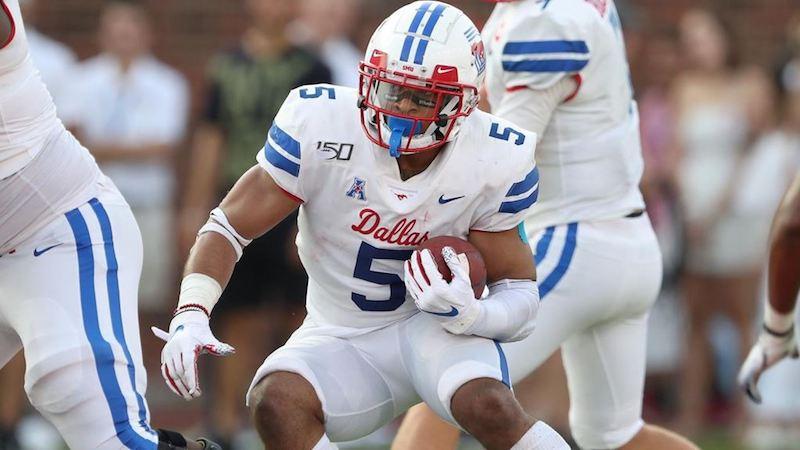 Despite Saturday being the home opener for the Mustangs, the talk coming into the contest centered around the visiting squad. Mason Fine, the two-time Conference USA Offensive MVP and fringe Heisman Trophy candidate, entered the evening primed to deliver North Texas its second consecutive victory over their cross-town rival. Just moments after the opening kick, however, it was a different gunslinger receiving all the attention as SMU rolled UNT for a 49-27 victory.

Shane Buechele, the Arlington native playing in his first home game of his SMU career, garnered all the praise as the home team made a statement early. Putting the ball in the end zone on the first three drives of the game, the Mustangs jumped out to a daunting 21-0 advantage they would never relent. Authoring a nearly blemish-free start at Ford Stadium, Buechele started with 118 yards in the air, 34 yards on the ground and his first SMU touchdown- a five-yard dart to Reggie Roberson Jr.

After trading scores for the remainder of the first half, the SMU offense squelched any hopes of a comeback for the Mean Green courtesy of the performance of senior running back Xavier Jones. Jones capped off a nine play, 76-yard drive with a nine-yard scamper to start the third quarter. Later, Jones put the exclamation point on an explosive night with a 51-yard touchdown to give his team a 42-20 lead with seconds left in the third frame.

The defense maintained a strong performance throughout the sweltering night that featured temperatures above 100 degrees at kickoff. Catalyzed by consistent pressure from the front four, namely Demerick Gary and Zach Abercrumbia, Fine was unable to resemble the play of a nationally acclaimed signal caller. The North Texas quarterback was held to 17 for 32 passing for 152 yards, a touchdown, an interception and was sacked 5 times.

“I think (this win) was big, because of how we came out last year,” Gary said in reference to last year’s 46-26 UNT victory in Denton. “We have actually been waiting on this game because it put a bitter taste in our mouths. It was a great team win for us and we have been working for these kind of moments.”

The secondary was dominate as well with big plays coming by way of junior Brandon Stephens on multiple occasions in coverage down the field. Linebacker Patrick Nelson added an interception in the first quarter to complete an all-around performance from the unit.

Through the air, Buechele spread it around, hitting eight different receivers to get to 292 yards, three touchdowns and 21 of 31 passing. Leading the pack was the all-time FBS receiving yards leader among active players James Proche who had seven receptions for 115 yards and a touchdown. Reggie Roberson Jr. added six catches of his own for 94 yards and two scores. With Buechele illustrating his strength in throwing the long ball, junior Tyler Page also highlighted the receiving core with a 40- yard reception.

“Shane (Buechele) made a big impact on our offense because he is such a great leader,” Jones said. “He got control of the guys so fast. Him just being here in the summer and he was voted captain, that shows a lot. He has the offense rolling right now.”

For North Texas, the most successful offensive weapon was running the football surprisingly. Making his debut on the season, after not playing in week one, Tre Siggers gave the defense trouble. Breaking tackles, the sophomore running back ran for 164 yards on 18 carries and a touchdown.

The only receiver for the Mean Green to go over 50 yards receiving was Jaelon Darden, who finished with 59 yards and a score.