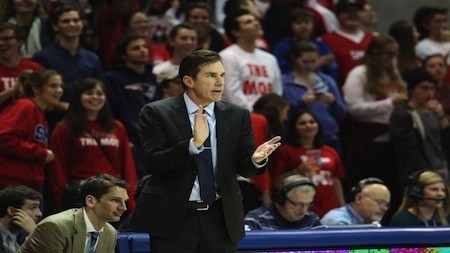 SMU Basketball just finished its fourth straight 25-win season, yet once again failed to advance in the NCAA Tournament.

It has been 28 years since the Mustangs have won a tournament game.

But nobody should care about another lackluster ending to a season that began with promise. Why? Because the Mustangs proved they could win with the baggage of their previous head coach.

SMU also proved something else: Tim Jankovich is the man.

After being hired as the Mustangs’ coach-in-waiting in 2012, Jankovich found himself thrust into the head coaching position when Larry Brown abruptly resigned in July 2016. Brown fled Dallas a season after the NCAA sanctioned SMU for academic fraud and levied a postseason ban.

He retreated to The Hamptons, leaving Jankovich with a short bench. Jankovich eventually found himself coaching only seven scholarship players: all guards, the tallest standing at 6-8.

Even with the disappointment of another first-round loss, Jankovich still emerged on the other end looking like a wizard. He not only coached the Mustangs’ unconventional lineup to the postseason, but to 30 wins – a program record. SMU won the American Athletic Conference championship and went undefeated at home for the first time since 1956. He was named AAC Coach of the Year and a semifinalist for the Naismith Coach of the Year award.

Jankovich not only exceeded expectations, but also made us forget about Brown. That’s how good of a season SMU had. The program will always have Brown to thank for the rebuild, but Jankovich’s transition was the ultimate embodiment of the phrase, “don’t let the door hit you on the way out.”

Jankovich led the program to its best season in school history in less than ideal conditions. The postseason wins will come, but now it’s time to focus on the future. Now it’s time to lock him up.

ESPN’s Andy Katz reported in July that the school offered Jankovich a contract of at least five years in length. Bill Nichols of The Dallas Morning News later confirmed his contract was worth $1.75 million.

But having proved to be a miracle worker, he deserves a raise, an extension – a new vote of confidence.

SMU Athletic Director Rick Hart probably has something like this already in the works, but in case he doesn’t:

He’s a proven winner. At the mid-major level, Jankovich compiled a record of 105-64 in five seasons as head coach at Illinois State. In 44 games with the Mustangs, Jankovich led SMU to 39 wins. His coaching lineage precedes him, descending from other greats such as Bill Self, Lon Kruger, and even the man he replaced on The Hilltop.

Despite starting behind schedule, Jankovich proved he can recruit. He also proved that he can recruit to his play style. SMU found success last season running an unorthodox five-wing rotation. His first recruiting class, which includes two point guards and two versatile forwards, will fit in nicely if that trend continues.

Two-time AAC Player of the Year Nic Moore was just as instrumental in SMU’s rebuild as Larry Brown. Moore was the Mustangs leading scorer in each of his three seasons, serving as the ultimate offensive weapon and floor general.

It’s easy to forget that Moore didn’t belong to Brown, at least not at first.

If money is the issue, it shouldn’t be. After all, SMU already set a precedent for excessive spending when it hired Jankovich as the coach-in-waiting. SMU reportedly paid Jankovich $700,000 to leave Illinois State, making him the highest paid assistant coach in the country.

According to a report from USA Today, SMU paid Brown approximately $2.8 million in his first year as head coach. Some of that came in the form of a bonus, meaning his annual salary was lower. But still, SMU was willing to pay almost $3 million to a 71-year-old coach known for not staying in one place for long. It only makes sense that Jankovich, a younger, proven winner, would be offered the same deal if not a better one.

Jankovich was recruited by SMU back in the day. Years later, he almost enrolled for law school. His son plays basketball at Dallas Jesuit just a short drive away. He has made it clear: this is a dream job.

“I’ve always followed SMU closely,” Jankovich told The Dallas Morning News in November. “I’ve always believed this was one of the great coaching jobs in America.”

But there are other dream jobs, such as Kansas State, where Jankovich played college ball. Others will soon want him, that is, if they don’t already. Even before SMU’s first-round loss in Tulsa, “What’s the next step, Tim?” became a frequently asked question.

If SMU wants to stay relevant in basketball, it starts with making Jankovich more comfortable. He has been given many reasons to stay. SMU must eliminate his reasons to leave.

Jankovich took SMU to the dance. Now it’s time the athletic department dances with the one who brought them.