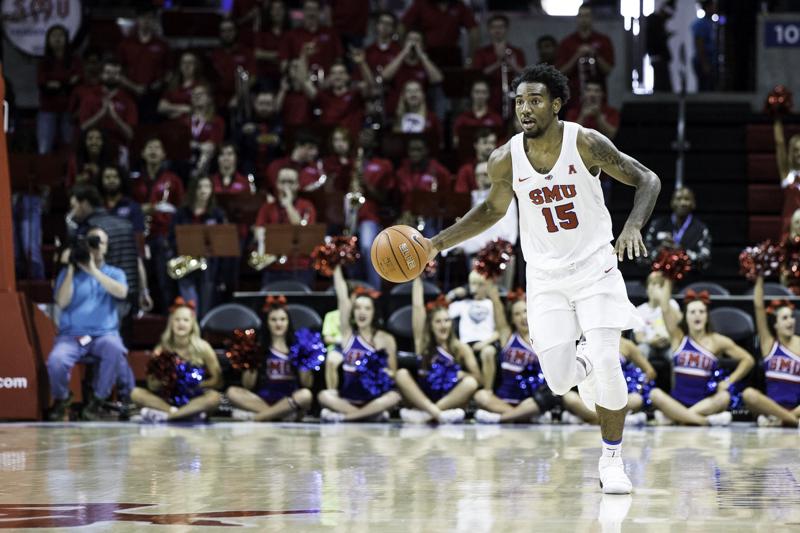 The transition to SMU was not perfectly smooth for Isiaha Mike.

A highly touted transfer that averaged 11.3 points per game as a freshman at Duquesne, Mike struggled to find his footing in his inaugural season on the Hilltop, averaging just five points per game in his first four.

Mike started the game with three turnovers in its first four minutes, causing Tim Jankovich to pull him, which upset Mike.

“I just don’t want you to set the Moody Coliseum all-time record for turnovers,” Jankovich joked.

Mike got going after that, and his top-notch play on both ends of the floor was instrumental in SMU’s win.

“He got ahold of it and was tremendous,” Jankovich said. “And I thought he really played well on the defensive end. In the second half it seemed like he was flying around.”

Jahmal McMurray gave Mike some help. The senior poured in 29 points, a refreshing sight for SMU fans after he combined to shoot five for 26 over his last two games. McMurray is the engine of the offense, and his individual scoring ability becomes even more necessary as SMU’s rotation thins with Jarrey Foster out.

While McMurray and the Mustangs finished the game with a comfortable lead, it wasn’t always smooth sailing. In the first half, the two teams looked evenly matched. SMU’s advantage in size and shooting showed at some points, but Tulane shared the ball better. A 3-pointer at the halftime buzzer by Kevin Zhang gave Tulane a 35-32 halftime lead.

The game remained close in the second half. SMU was able to climb out of a five-point hole with a 10-1 run that featured 3-pointers from Mike and Nat Dixon and stout defense as the Mustangs held the Green Wave without a field goal for nearly four minutes.

Still, Tulane hung around. With four-and-a-half minutes left, Ethan Chargois fouled out. Moses Wood’s ensuing free throws put the Green Wave behind by just two. In danger of losing to the conference cellar-dwellers, SMU hit some clutch shots to pull the game out. The teams traded baskets, but then McMurray and Mike each drained their fifth 3-pointer of the night before McMurray got lay-up to give SMU a commanding 10-point lead.

SMU outscored Tulane by 13 points in the second half after trailing in the first. What changed? Effort.

“We felt we weren’t playing as hard as we could’ve (in the first half) so we tried to step it up,” McMurray said.

“I think what people want to pay for is something extraordinary in effort,” Jankovich said. “At halftime I wouldn’t have paid to watch us with that effort in the first half. But the effort in the second half, you saw the crowd get into the game.”

The win was SMU’s first since Foster re-injured his knee, and the team is admittedly still working out some kinks without its senior leader. Jankovich said after the game that he does not know the extent of the injury. He doesn’t know if Foster will come back this year.

While he’s out, players like McMurray and Mike need to continue to play their best basketball as SMU looks to climb back atop the AAC.