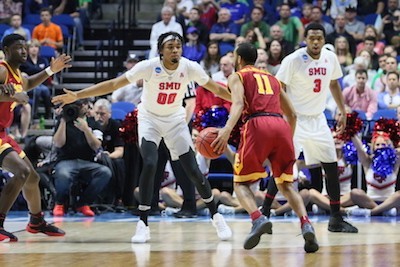 But the Mustangs’ time in the NCAA tournament lasted a mere two hours, and ended at the hands of a familiar opponent.

The loss brings some déjà vu: Each of SMU’s last two NCAA Tournament trips resulted in a loss to an 11-seed from the Los Angeles area, on a go-ahead 3-pointer in the final minute and on a miss at the buzzer. Each of those teams was the American Athletic Conference regular-season and tournament champion.

Elijah Stewart, open in the corner on a pick-and-roll based play for what felt like the millionth time, gave USC the lead for good on a 3-pointer from the corner with 36 seconds left.

The game was a rematch of a Nov. 25 game in Los Angeles, which USC won 78-73. The Trojans are responsible for 40 percent of SMU’s losses this year.

SMU trailed for just 73 seconds of the entire game. Despite the close ending, SMU’s lead was as large as 12 in the first half, was 38-30 at the break, and reached 10 early in the second half. Before taking the 66-65 lead, USC tied the score three times in the second half and had a different one-point lead with 2:06 left.

Semi Ojeleye broke each tie, the first two with a 3-point play. Shake Milton, the Tulsa-area native, erased SMU’s first deficit with a 3-pointer with 1:33 left.

But Milton couldn’t erase the second one. His hurried floater at the buzzer hit the front rim. The possession before, Ben Moore missed the front end of a one-and-one.

Ojeleye led SMU with 24 points, but his last shot came with 2:31 left in the game. Sterling Brown scored 17. Shake Milton, playing in his hometown, scored 11. Brown and Milton played all 40 minutes. Ojeleye played 39.

SMU, usually very good against zones, struggled against USC’s zone at the end of the game. On the possession before Stewart’s 3-pointer, Brown stepped out of bounds in the corner.

After Milton made a 3-pointer to put SMU up 60-56 with 3:55 to go, USC got a layup from De’Anthony Melton and two free throws from Metu to tie the score at 60. Ojeleye hit a turnaround jumper from the foul line to give SMU a two-point lead. Boatwright countered it with a 3-pointer to give USC a 63-62, only to have Milton counter him.

SMU’s first half, save for a USC 10-2 run that spanned five minutes late in the half, consisted of the Mustangs getting the shots they wanted. Brown, often matched up with tough perimeter defender Melton, scored 11 points in the opening 20 minutes.

USC also opened the second half with a 10-2 run that tied the score at 40, but Ojeleye gave SMU the lead right back on a 3-point play with 15:40 left. That started a 10-1 SMU run, defined by Brown scoring twice with Melton on him. The first was a layup off the dribble, the second a post-up. A few possessions later, Brown drilled a 3 from the top of the key as the shot clock expired.