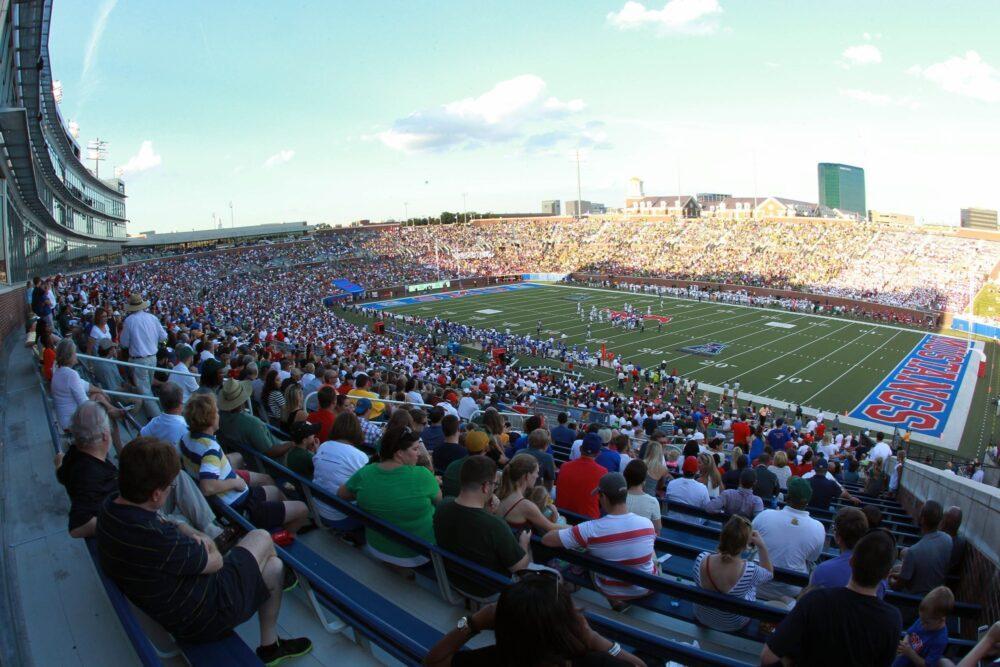 Editor’s Note: This story has been updated as of 10:38 a.m. to include a statement by SMU.

UNIVERSITY PARK, Texas — Police and stadium security kicked out a large portion of SMU’s student section on Saturday after most were not wearing masks or social distancing.

The grassy knoll area of the stadium, on the far end of the field, started to fill at the end of the first quarter with students. By the middle of the second quarter, the area was populated about 10 rows deep with spectators who were not following the signs laid out to stand six feet apart. At one point, students were seen throwing beer at an opposing player after a touchdown.

Police, prior to halftime, blocked off the area and began the process of clearing the entirety of the section.

The Daily Campus was told by multiple students that police asked the majority of the spectators in the grassy knoll area to exit the stadium and not return. Some were able to relocate to another part of the stadium in a socially distanced format.

“During the game, some students began to gather and disregard safety measures. They were asked to spread out and mask when in close contact,” SMU Athletics said in a statement.

“After numerous attempts by staff and security to get the students to comply with these safety requirements, it became necessary to clear the area. While some students did move to another area in the stadium where they could watch in small groups at safe distances, many did leave,” the statement read.

At this time, it has not been determined if the police acted upon the orders of the athletic department.

This incident is the second in as many weeks of SMU fans at Gerald J. Ford Stadium not following coronavirus protocols. Last week, SMU’s first home game of the season, fans in the same area of the stadium were seen not wearing masks or social distancing.

Hart sent out multiple emails prior to Saturday announcing stricter COVID-19 protocols and urging those in the stadium to follow basic coronavirus protections. Among the announced changes this week was increased security to ensure fans followed the guidelines.

“The majority of fans in the stadium behaved responsibly and were socially-distanced and masked,” Athletic Director Rick Hart wrote in a public statement. “That said, we will be working to adjust the behavior of a small subsection of fans who did not follow our pledge to protect, which was sent to all ticketholders.”

The university announced 1,000 students would be allowed into the stadium for home games this year. Last week, SMU said it had sold out all of its student tickets. This week, it announced the same.

However, there appeared to be far more students in the stadium today than last week.

“While no one at SMU wants to see fans leave, it is important to preserve our privilege to host games with fans in the stands during a pandemic. The safety and wellbeing of our fans and students is our highest priority… Our hope is that our students will be able to return to our next home game and we will continue to work toward that goal,” the SMU Athletics statement finished.