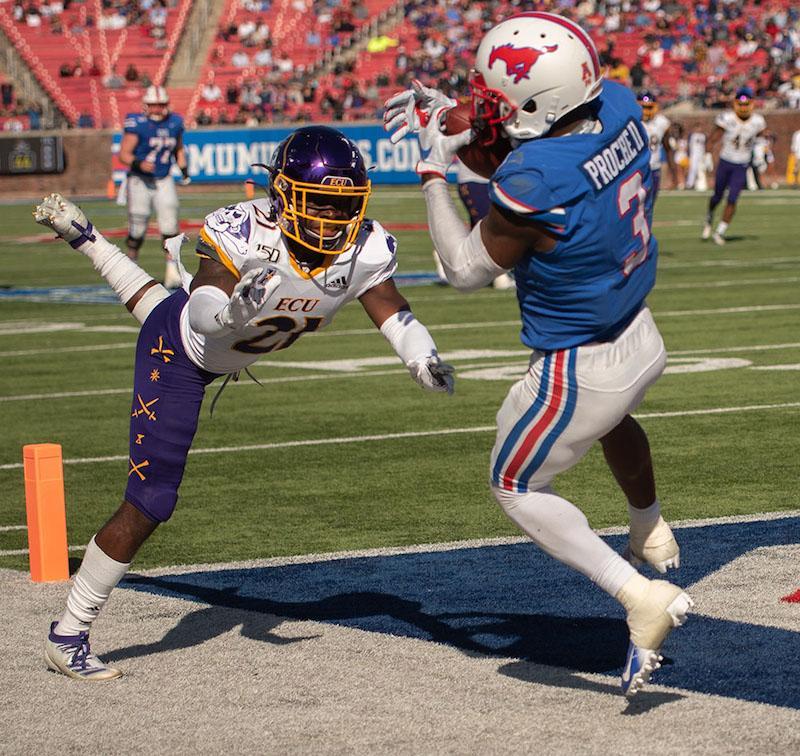 SMU took down the East Carolina Pirates in an offensive shootout, with a final score of 59-51, at Ford Stadium on Saturday.

With the homecoming victory, SMU jumps from No. 23 in the AP Top 25 to No. 20. Several SMU players got their names in the school record books after their performances on Saturday.

In Xavier Jones’ three touchdown performance, the senior overtook SMU legend Eric Dickerson on the leaderboard for single-season touchdowns with 20. Senior wide receiver James Proche surpassed Emmanuel Sanders as the SMU player with the most career receiving touchdowns with 36 in his four years.

“He’s different than some of the guys that I’ve had, I think he’s pretty unique in what he does, skill-set wise,” head coach Sonny Dykes said about Proche after the game. “I think people get caught up in all the measurables and all that stuff, but football is about performing. One thing that you know is, on Saturdays, James Proche is going to show up and perform at a high level and he’s going to compete hard, and that’s about the biggest compliment you can give a football player.”

The matchup between the Mustangs and Pirates was primarily all offense. Each team accumulated over 600 total yards of offense and were only forced to punt four times, all in the first half.

SMU proved they can score at any given time, but Kevin Kane’s defensive group struggled for most of the day. Kane’s secondary let up 498 yards in the air and six touchdowns. After the game, Dykes explained that there is a lot that needs to be cleaned up, particularly with tackling.

“I think it’s just a bust here and there, people not doing their job on a particular play,” veteran defensive end Turner Coxe said.

Although the Mustangs couldn’t find a way to stretch the lead early in the game, the special teams group came up with a much needed turnover to build momentum late in the fourth quarter.

“The irony of the whole thing was last week, our kickoff coverage was so bad and this week it’s probably what won the game for us,” Dykes said. “The fumble on the kickoff was obviously really critical to us winning the ball game.”

After the turnover the Mustangs went up two touchdowns and held on to the lead for remaining minutes of the fourth quarter.

SMU football gets a break next week as the team has its second bye week of the season. SMU will travel to Annapolis, Maryland, to take on Navy on November 23 after the open week.