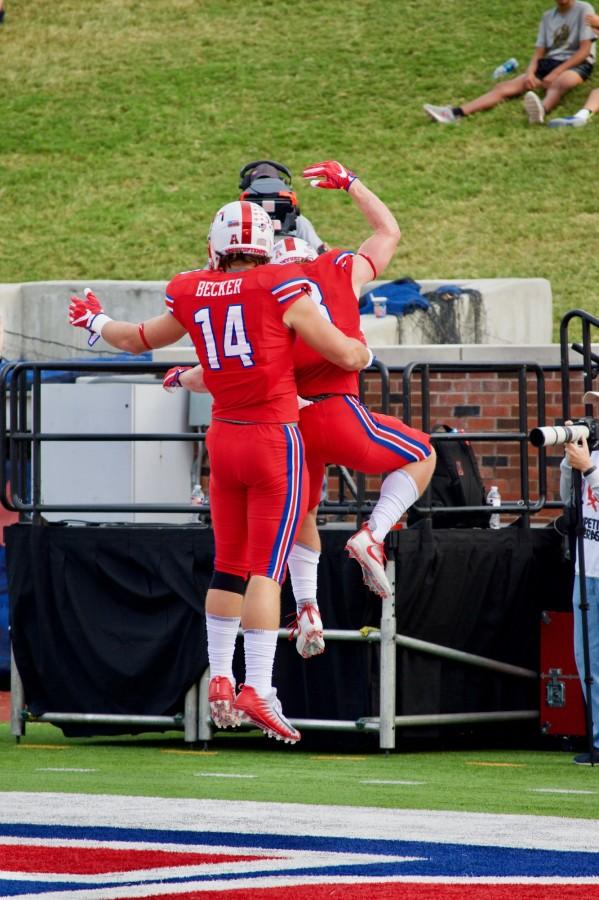 The sophomore tight-end isn’t a starter. He’s only had one career reception. When he is in the game, he’s on special teams or leading the way for one of SMU’s running backs. To put it simply, Becker is a role player: someone who does his job week in and week out with little fanfare. But in Saturday’s 49-28 win over UConn, Becker made the biggest play of the game.

With the heavily-favored Mustangs clinging to a seven-point lead with just over seven minutes left, SMU’s defense forced UConn to punt. Enter Ryan Becker. He charged through the offensive line on fourth down, jumped over the up-back, and blocked the Huskies’ punt. SMU recovered the ball at midfield, and scored one play later. The Mustangs never looked back en route to their first conference win and fourth win of the season.

“I thought the play of the game, without a doubt, was Ryan Becker’s blocked punt,” SMU head coach Chad Morris said. “I’m really proud of that young man. He’s a guy that just comes to work every day and does what we ask him to do.”

SMU got on the board first in the first quarter. On the team’s first offensive drive, the Mustangs went 75 yards on nine plays. Ben Hicks was 5-5 on the drive, and hit Courtland Sutton on a six-yard pass from Ben Hicks. It was Sutton’s first receiving touchdown since the second game of the season. He would finish with seven catches for 112 yards, his second-largest output of the season.

SMU starting cornerback Jordan Wyatt missed the game with a shoulder injury, and UConn took advantage of his absence. Quarterback Bryant Shirreffs had 208 passing yards in the first half alone—including a 64-yard strike to Aaron McLean for the Huskies’ only touchdown of the half.

“We were exposed on the back end,” Morris said. “We had to put some young guys in there.”

After an SMU touchdown courtesy of Xavier Jones and a UConn field goal, SMU mounted a 10-play, 80-yard drive that was capped off by a Trey Quinn touchdown to put the Mustangs up 21-10. They would carry that lead into halftime

Despite holding an eleven-point lead at the break, Chad Morris was not happy. He challenged his players to do more—to be better in the second half.

“I thought in the first half we were very lethargic,” Morris said. ”I was very disappointed in our play. I didn’t think we had played to our standard.”

An SMU three-and-out and a bad punt gave UConn the ball at the Mustang’s 48-yard line. Down just two scores, the Huskies’ offense went to work, driving the ball down to the SMU 2. On fourth down UConn running back Nate Hopkins plunged into the end zone to cut the Mustang’s lead to just four.

After an SMU punt, UConn took possession at its own 25 and again marched down the field, tearing through the Mustangs defense en route to a field goal that cut the lead down to just one point. Suddenly the momentum was with the Huskies, and the Mustangs were feeling the pressure.

“We gave up the big play too many times,” Morris said. “That was huge. Kept them in the game.”

This time, however, SMU responded. The Mustangs drove down the field and on third down and nine, Hicks once again found Quinn in the end zone to make the lead 28-20. It was Quinn’s second touchdown on the day. He would finish with 15 catches for 116 yards.

But the lead was short lived. Just three plays later, Shirreffs found Keyion Dixon behind the secondary for a 59-yard touchdown. A two-point conversion tied the game at 28 with 14:51 left in the fourth quarter.

On the sideline, Morris got his team together. He told his players that they were about to find out a lot about themselves. Suddenly a switch flipped, and the momentum shifted. SMU started to dominate. From there on out, it was all Mustangs. Hicks hit Sutton down the sideline for a 34-yard touchdown to put SMU up seven points. It was his fourth touchdown pass of the game. Then Becker blocked the punt. Four plays later SMU was in the end zone again, taking a 42-28 lead with just over six minutes left.

“While it wasn’t our best performance, it was our best response,” Morris said. “Games like this will do nothing but make us better.”

On the ensuing UConn drive, the Mustang defense overwhelmed the Huskies’ offensive line, sacking Shirreffs three times in four plays. Defensive end Justin Lawler accounted for two of the sacks. He tied a program record with four sacks on the day. As a whole, the team had eight, and held the Huskies to negative rushing yards.

“Anytime you hold someone to less than 100 yards rushing you’ve done something [right],” Morris said. “We held them to minus eight.”

It was an important victory for the Mustangs. It was an expression of how much the culture has changed since Morris took over, and how far the Mustangs have come this season. Morris said that this was probably a game SMU would have lost last year. Sutton went a step further. He said that it was the culture Morris instilled upon the players that allowed them to respond like they did.

“We don’t let small things affect us as much as they would have affected us a year ago,” Sutton said.

With the victory SMU is now just two wins away from bowl eligibility. But things will only get tougher in the coming weeks. Next week the Mustangs travel to Houston to face the Cougars, a team that SMU upset at home last season. Morris said that he expects it to be a close game.

“There’s a lot of things we can do to get better,” Morris said. “We’ll get back on the field tomorrow and improve.”