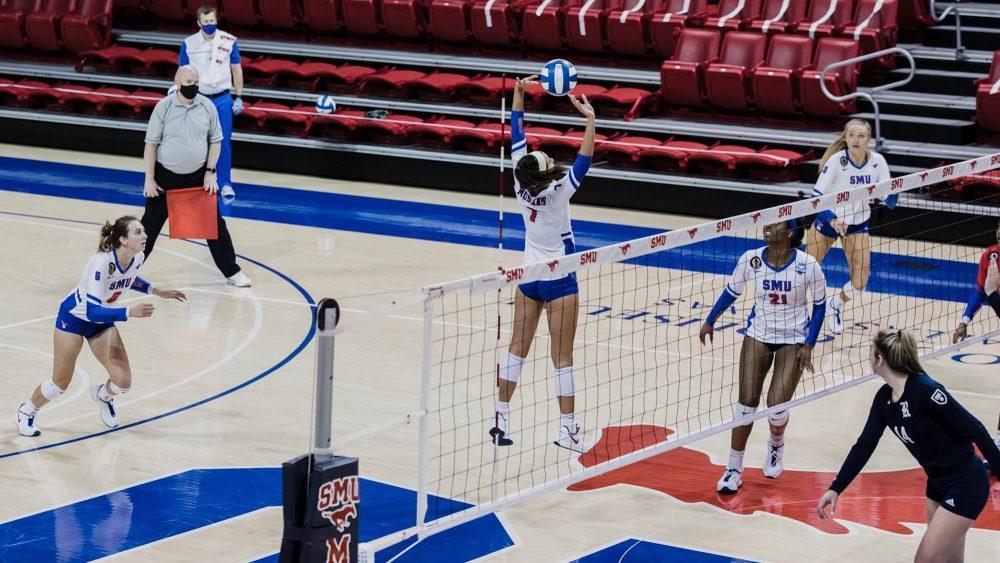 University Park– The Mustangs were taking the floor for the first time in over a year on Friday evening at Moody Coliseum. While the team was certainly full of nerves, their excitement was more prevalent as they quickly took control of the first set. Showing little signs of rust, Hannah Jacobs, SMU’s premier outside hitter, took the first two points of the set with back to back overhand spikes.

SMU charged ahead in the first set, expanding their lead to six points, before Rice’s comeback began. With SMU up 21-17, the Owls went on a 7-2 run to take the advantage. Led behind Nicole Lennin, a former conference player of the year, Rice took the first set. Lennin’s versatility proved too much for the Mustangs to handle in set one. She was all over the floor, helping dig tough balls with her libero, initiating back row attacks, and using her overwhelming athleticism to power through SMU’s blockers.

The second and third sets were back and forth, with both teams taking one each. With Rice up 2-1 as the fourth set began, the Mustangs offense took over. It hit a combined 0.420, as three SMU players hit double figures in total kills for the match. One of these players was Jaydyn Bauss, who notched 17 kills, a new career high for her.

But SMU’s offensive greatness wouldn’t have been possible without Lily Heim, last years AAC setter of the year. She chipped in nearly 50 assists in the first game, helping set up her outside hitters like Bauss or Jacobs for sharp and line shots, or tossing lobs to redshirt senior Meryn Kenneday for strong attacks through the middle.

SMU ended up winning a hard fought first game 3-2. It won the last set 15-5, dominating on both ends of the floor during the final minutes.

Saturday afternoon’s rematch was a lot more one-sided than the night before. SMU won the first set 25-20, and while at one point, the second set looked to fall in the Owls’ hands, the Mustangs persisted. Down 20-13, the Mustangs scored eight straight points. SMU forced errors from the Owls, wisely used a challenge, and kept attacking, finishing out the second set victorious, 25-23.

The third set was all SMU. The Mustangs opened on a 10-4 run, and the Owls stood no chance the rest of the way, as SMU finished the game 25-20 on the third set.

Jadyn Bauss had an excellent attack percentage of nearly 0.48, killing 12 of her 23 total attacks. Bauss’ athleticism and consistent play was a large factor in SMU winning. She drew the attention of Rice’s blockers, and SMU’s offensive game opened up as they picked their spots to take advantage of Rice’s cluttered defense. Bauss and Jacobs also hit very difficult sharp shots, across their bodies, to negate the effectiveness of Rice’s length on the front row. Jacobs ended the game with 14 kills of her own.

SMU’s skillful hitters helped coast them past Rice in their second game, as Lily Heim continued her excellent setting, notching in 34 assists and setting up 90 attacks for SMU. She also showed her versatility, with three kills in form of setter dumps, and one block.

For the Owls, Nicole Lennon remained a walking highlight. She had over 20 kills again on Saturday, and also received every one of the 23 balls that came to her in the second game.

SMU’s next challenge will be another two game series against UTA on February 4th and 5th at Moody Coliseum.