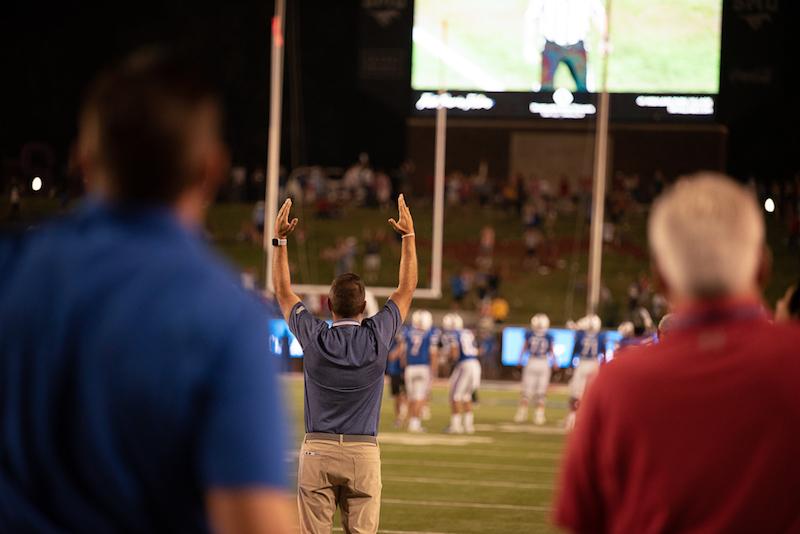 SMU struggled to find a rhythm on offense in the first three quarters of the matchup against Tulsa last weekend, but after a fourth quarter comeback and three overtimes the Mustangs came out on top 37-43.

Through the first five games, SMU has proven to be a quick-hitting offensive team that is one of the best in the nation at putting points on the board. Tulsa’s defense has incredible size at every position and the Mustangs couldn’t find the answer early on to combat that.

“You’ve got to give Tulsa a lot of credit. I thought their team played hard, they played well, they had a good game plan. We kind of thought this was a tough one coming in, just the style of the play and the way they play,” SMU Coach Sonny Dykes said after the game on Saturday. “We knew it was going to be a dogfight and you’ve got to give our players a lot of credit. It was awesome for us to go down 21 and just for them to keep playing and hang in there and figure out a way to win the game.”

Despite a few blown coverages and a couple lengthy gains out of the backfield, Kevin Kane’s defensive group fought hard throughout the entire game. Ar’mani Johnson came up with two first half interceptions, one of which was returned 64 yards for a touchdown. Arkansas transfer Chevin Calloway also came up with a takeaway that led to a Kevin Robledo field goal. SMU’s only first half appearance in the end zone was Johnson’s pick, but the turnovers helped to stunt Tulsa’s offense just enough for a fourth quarter comeback.

“They’re huge. They’re huge, and I think it’s even bigger for us as an offense to turn it around and go score,” SMU quarterback Shane Buechele said on Tuesday. “I think we’ve struggled with that, so we’ll have to be a lot better when the defense gives us the ball back that we have to capitalize and go score.”

Down 21 points in the fourth quarter, Shane Buechele looked to the always-reliable James Proche to do what he does best. Proche recorded 153 receiving yards and an incredible one-handed catch in the end zone that put life back into what seemed like a hopeless battle.

“You expect those guys (SMU receivers) to make plays just because they have,” Dykes said after the game. “You figure if James has got a chance to come down with it, he’s going to and he certainly made a couple big catches tonight.”

After three fourth-quarter touchdowns, SMU faced overtime, where Tulsa had the chance to put the game away with two field goal attempts but missed both. Shane Buechele went back to Proche in triple overtime in the corner of the end zone. The veteran made a remarkable catch with the defender draped all over him but the officials initially ruled him out-of-bounds. After further review, the receiver’s foot did, in fact, come down in-bounds, and SMU’s undefeated record remained intact.

“We are a four-quarter team and just the work we put in this summer and at practice every day. Man, I’m so proud of this team. There was no doubt,” Proche said after the comeback victory.

Sonny Dykes and the team are now 6-0 headed into a bye week and will face a tough Temple team next week.