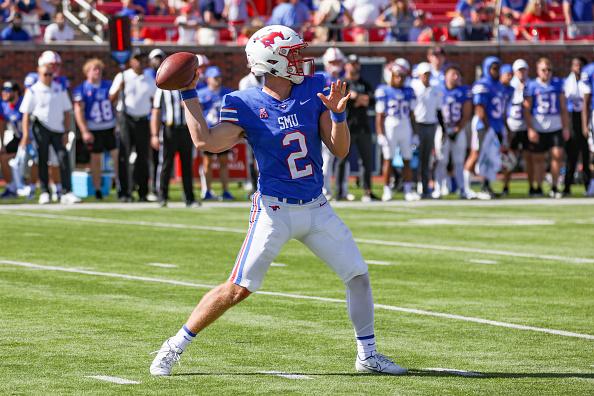 SMU’s quarterback Tanner Mordecai among other key players did not play on Saturday against Tulsa in what was already expected to be a tough game. The Mustangs pulled off a 45 – 34 win despite adversity.

Mordecai suffered a concussion against Cincinnati Saturday Oct. 22 and had to miss the game because of the NCAA’s concussion protocol requiring Dallas native Preston Stone to lead the Pony Express. The game was off to a promising start as Stone completed a 75-yard pass to star receiver Rashee Rice for an SMU touchdown on the opening drive.

Late in the second quarter Stone had already completed 219 passing yards when he got hurt and was unable to play the rest of the game. Later, it was made known Stone had broke his collarbone and could remain out for the rest on the 2022 season.

The Silent Assassin, Kevin Jennings, walks off after the win over Tulsa. pic.twitter.com/YCtiSz1f38

Trotting onto to the field, true freshman Kevin Jennings replaced Stone and put together important drives for the Mustangs resulting in SMU keeping their lead and ultimately winning over Tulsa. Jennings finished game with 91 yards and had one touchdown to Rice in the third quarter.

Other players seized the day and capitalized on mistakes from the Golden Hurricanes including defensive lineman Elijah Chatman with a scoop and score.

The Mustangs are now ranked sixth in the American Athletic conference standing at 2-2. Injuries continues to pile up on both sides of the ball however, the Mustangs look towards this Saturday as they take Houston at 6:00 p.m in Gerald J. Ford stadium.