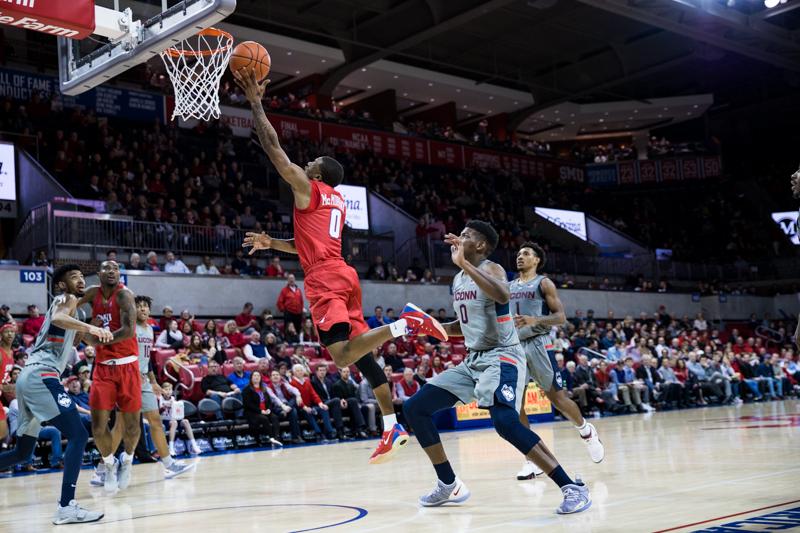 Each of SMU’s five straight losses heading into its Thursday night tilt with UConn came from the Mustangs not executing down the stretch of a close game.

So on Thursday, they made it so they didn’t have to, comfortably beating the Huskies 77-59.

“I feel a million times better,” Tim Jankovich said of the win.

The win was much-needed for Jankovich and SMU. He’d seen his season slip away in recent weeks with those five losses, two of which came in winnable games at home. UConn came into Thursday night’s game tied with the Mustangs at 4-8 in conference, and are missing star guard Jalen Adams. At home, this was a game SMU could absolutely not afford to lose.

With Adams out and UConn’s other talented guard – Alterique Gilbert – limited; Jahmal McMurray was the best player on the floor. He had one of his most efficient nights of the season, pouring in 25 points and making 10 of his 14 shots. He punctuated the win with two 3-pointers in the final minutes, hitting an isolation 3 to put SMU up 12 with 3:39 remaining and a deep fade-away in the final minute.

But the aspect of McMurray’s game that stood out most was his driving. McMurray consistently beat his defender off the dribble, getting to the rim for layups.

“What we’re asking him to do is to make a lot more plays for others,” Jankovich said. “The only way to do that is to drive the ball. Tonight, not only did he drive it but he got all the way to the basket.

SMU’s run to pull ahead big came at the outset of the second half. Up 36-28 at halftime, the Mustangs came out of the locker room and went on a 15-7. Isiaha Mike scored nine of his 14 points in the first five minutes of the half, making big shots to help SMU pull away.

SMU made 28 of its 49 shots on the night, coming close to doubling UConn’s shooting percentage. The team went inside more after its offensive attack had become increasingly 3-pointer heavy in recent games, culminating in 37 3-point attempts at Central Florida. On Thursday it had success dialing the 3s back, shooting just 15 and making eight.

McMurray led the way with his drives to the rim, but the team as a whole bought in to scoring inside. Feron Hunt had several high-flying dunks and a backwards circus shot, firing up the team in the process.

“I think they feed off of me,” Hunt said. “When I get a dunk it turns everybody up so I try to get one of them every game.”

While SMU lit it up, UConn did the opposite. The Huskies shot a paltry 30 percent, as they couldn’t figure out SMU’s zone all night. The zone was an adjustment for SMU, which traditionally plays a switch-everything man defense.

“We’re a man-to-man program,” Jankovich said. “But sometimes circumstances maybe require you to take a look. We played a lot of zone last game as well so we’re trying to develop that. Tonight it was great.”

“We’re long and athletic and everybody’s versatile,” Hunt added. “it’s easier for us.”

Whether it means playing more zone, getting more shots at the rim or any other tweak the team made, SMU has to build on this performance to climb out of the AAC’s cellar.