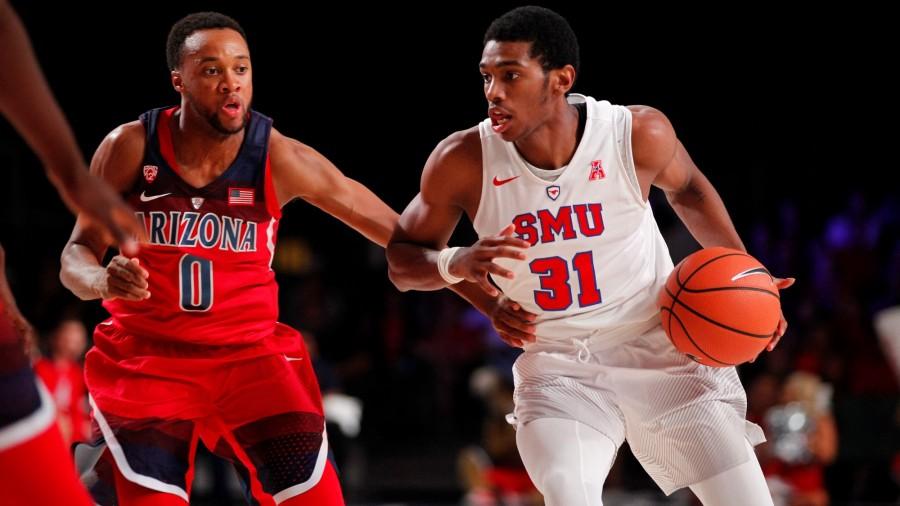 Ben Emelogu had a season-high 20 points and Ethan Chargois sparked a key second-half run as the SMU Mustangs topped No. 2 Arizona Wildcats 66-60 Thursday night in the second round of the Battle for Atlantis tournament.

The Mustangs trailed 21-12 midway through the first half but came roaring back to take the lead with a 13-2 run. Emelogu was key in this stretch, scoring six of the Mustangs’ 13 points to key the run. He finished with 14 points in the first half as SMU went into the break down 31-30.

Both teams traded blows in the early minutes of the first half, but SMU took the lead with just over 17 minutes left and embarked on a 15-3 run, helped by Chargois. The freshman forward played just two minutes in the first half due to foul trouble but rebounded. He scored 11-straight points for the Mustangs to start out the second half. Emelogu did the rest, hitting to three-pointers to help the Mustangs to a 51-40 lead.

The Wildcats came back with a 13-0 run to take a 53-52 lead going into the under-8 timeout. With 5:45 remaining in the game, SMU regained the lead on a fast break layup by Shake Milton.

The Mustangs didn’t trail again. The defense tightened up in the last minutes to force five Wildcat turnovers to clinch the 66-60 win. All game long, the Mustangs harassed the Wildcat players and forced 20 turnovers.

Senior Akoy Agau played for the first time this season. He had been battling a knee infection that left him sidelined.

The Mustangs recorded 20 offensive rebounds, a season high, and 14 second-chance points. Both teams had 26 points in the paint.

Vaunted Arizona guard Alonzo Trier had 22 points for the Wildcats but turned the ball over 5 times.

SMU will face Western Kentucky Friday in the fifth-place game in the Bahamas.