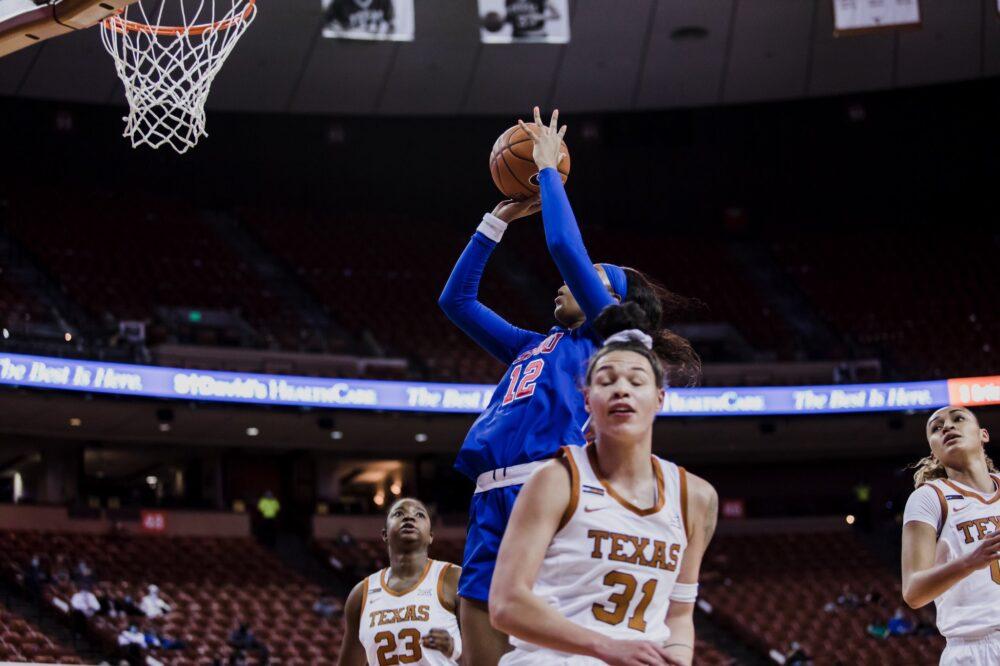 Texas led by as many as 49 points, handing the Mustangs their largest defeat since losing to Connecticut on Jan. 24, 2019.

SMU got off to a rough start, making just four of its first 15 shots in the first quarter while turning the ball over eight times. Nine more turnovers in the second quarter gave Texas a 20-point lead heading into halftime.

The second half featured more of the same with Texas going on a 17-3 run to start the third quarter and never looking back. The fourth quarter saw the home team widen its lead to 49 before SMU went on a 10-0 run to finish the game.

“I don’t think we played extremely well,” head coach Travis Mays said. “I thought we played actually bad. We had been playing and practicing so much better than what our showing was here tonight.”

Celeste Taylor dominated the first half for Texas, scoring 17 of her 24 points in the first two periods. She also finished the game with eight steals. Charli Collier took the baton in the second half and poured in 24 or her 26 points while also pulling down 12 rebounds.

Amber Bacon led SMU in scoring off the bench with 13 points. Tamia Jones scored five points and dished out a team-high five assists in her first game. JaQuia White had four points and eight rebounds.

The consistent on-ball pressure by the Texas defense forced 30 SMU turnovers. The Longhorns also finished with 15 steals and eight blocks on the afternoon.

“I don’t think Texas played extremely well, but it’s kind of hard to say that when you look up at the score,” Mays said. “I don’t think we put up any resistance at all.”

The season opener for SMU occurred a few weeks later than it normally would have in a year without COVID-19. The preseason for players and coaches was affected by various restrictions and uncertainty about the pandemic’s impact on the team’s schedule.

“I’d say it was extremely difficult, but I’d say we did a fantastic job at SMU getting our athletes to play,” Mays said. “I don’t think that is indicative of what we showed tonight.”

SMU returns to Moody Coliseum for its next game against Texas State on Dec. 3 at 7 p.m.

“The first thing I told our team is that this one game doesn’t make or break our season,” Mays said. “We got a lot of stuff that we’re going to go back and work on, and hopefully we’ll be ready for Texas State when they come to our place.“