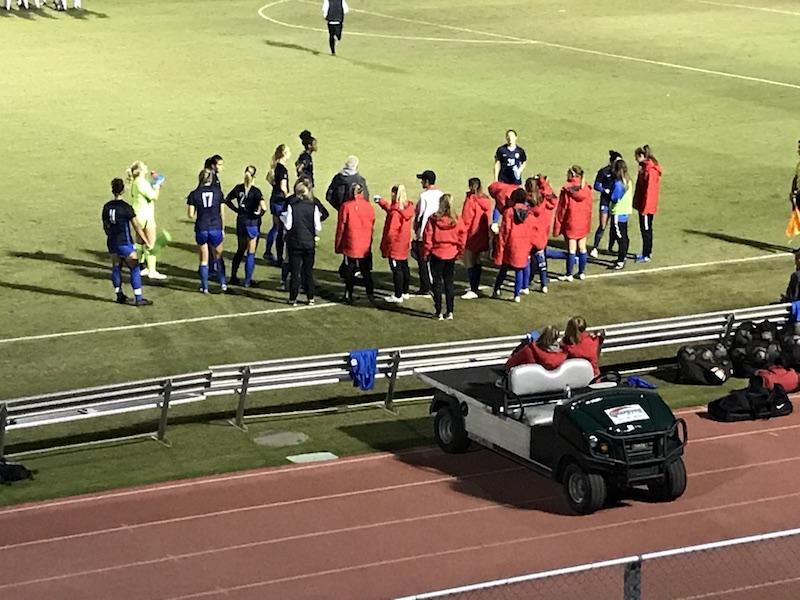 On an uncharacteristically cold evening at Wescott Field, SMU was unable to find its footing and succumbed to Cincinnati 1-0. In a game that felt as though the Mustangs outplayed the Bearcats in just about every facet of the contest, it was a lone mistake the defined the night.

The SMU offense found itself on the attacking side of the field for most of the game, controlling possession of the ball for over 62 percent of the ninety minutes. When Cincinnati had its chances though, they proved to be lethal.

With Cincinnati playing a ball off a free kick, SMU’s trio of defenders conceited too much room to operate to Bearcat senior Sydney Goins and she made them pay. In what was the only opportunity for Cincinnati’s offense to move in space, Goins quickly lined up a shot off her right foot and fired a rifle past a leaping Tatum Sutherland. Up 1-0 in the 36th minute, the visitors would never relent the lead. The first half goal was only the third of its kind allowed by the Mustangs all year.

Even playing from behind for the majority of the game, the Mustang offense generated plenty of chances to find an equalizer. On the night, SMU notched a near season high in shots, registering 21 to Cincinnati’s 6. At the same time the aggressive mentality on offense was catalyzed by an uncommon source; the backline. Brooke Golik and Mary Meehan were making long runs into the attacking third and creating chances for an offense that has been sputtering of late.

The only caveat to the shot totals came from shots on goal, where the Bearcats matched the Mustangs at five a piece. It was the theme of the night, Cincinnati had few opportunities but capitalized on the chances they were afforded.

“I thought we played pretty well. We moved the ball and we were able to create goal scoring chances. We had the ball most of the game. They had one goal scoring chance in the game, and they scored,” said head coach Chris Petrucelli. “They are built to play that way, and it worked for them.”

The Bearcats have the lead at the half

The strong hold SMU had over the game became most evident in the second half, even playing down a goal. After the intermission, the Mustangs played nearly flawless soccer and tallied a 15-1 advantage in shots. That included a 3-1 edge in shots on goal, but the flurry of chances was not enough to end the goal scoring drought. For the second straight game, the Mustangs were blanked but the trend has followed them for longer than just 180 minutes of soccer. Since entering conference play, SMU has only pushed across two goals.

“Look I don’t want to take away anything from the other teams. They have certainly played quite well. We have had our chances we just haven’t finished them,” said Petrucelli. “We haven’t struck the ball very well and in the times we have struck the ball well we hit it to the goalkeeper. We haven’t been good in front of the goal.”

Tonight, though, was not a case study in a lack of dangerous chances. Hannah Allred, who continues to ease her way back into the rotation from injury, made an immediate impact on the game when she entered late in the first half. Allred rallied momentum with a series of near misses and applied pressure on Cincinnati keeper Madison Less. In 63 minutes of action, the junior lead the team in shots on goal with two. Petrucelli remarked after the contest that Allred was close to being back to the player she was before the injury she suffered on September 19.

Celiana Torres was all over the field manufacturing chances. Winning fifty-fifty balls in the midfield, Torres also was able to muster up four shots while playing the full game. The offense felt as though it was building all night, reaching its apex in the final ten minutes. Jewel Boland and Wayny Balata were the authors of three of the most promising chances on goal in an effort to find anything late.

Boland let the ball roll to her left foot in the 85th minute and shot across the bow but a diving Less came up with save. In the 88th minute the junior created a similar look, but the result was duplicated. Balata did her part in the final flurry but her cross to the upper right corner of the frame inched high over the crossbar.

SMU is now 8-5-1 and 1-4 in conference play. They will have the opportunity to break the two-game skid on Sunday when they welcome Eastern Carolina.