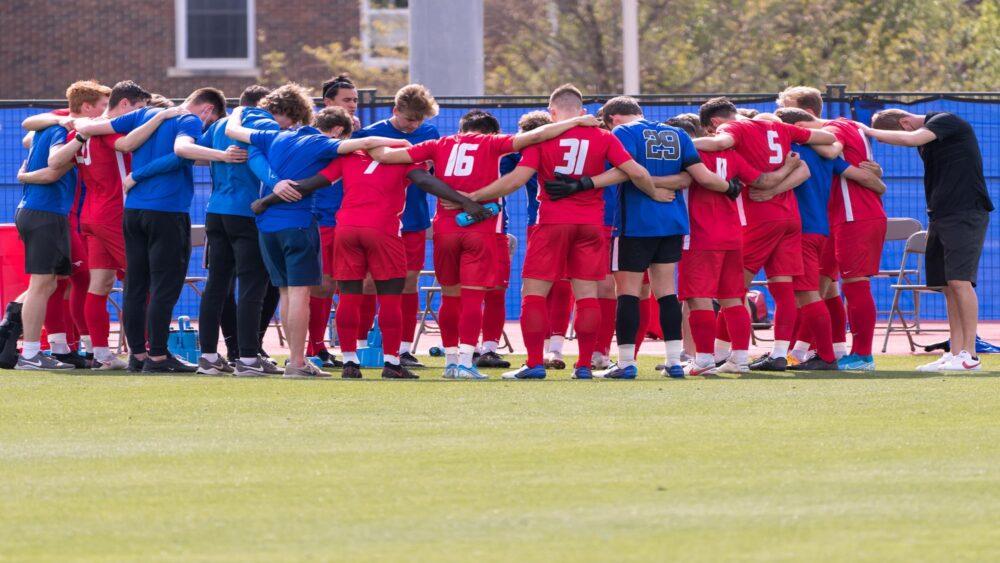 UNIVERSITY PARK, Texas — “Some of the best we’ve played this year.” That was how head coach Kevin Hudson described the Mustangs’ performance on Saturday night.

After a season full of uncertainty that led to canceled games and inconsistent play where the Mustangs failed to win more than two games in a row all season long, emotions took over the field.

As SMU seniors Nick Taylor, Noah Tilt, Luke Thompson, and Brandon Terwege took the field for the last time, they were showered with love and memorabilia. Regardless of the result, the match was one to remember. On a cool spring night in Dallas, SMU’s 2020-2021 regular season came to a close. The yin and yang of this year were finally put to rest.

The Mustangs ended the regular season 5-5, a balanced and neutral record-signifying the team’s inability to put together a chain of wins, but also their resilience to bounce back from losses.

Senior night ended 2-1 in Temple’s favor, a surprising outcome considering SMU’s statistical advantages during the course of the game. SMU had 22 shots, nine of them on goal, while the Owls had just nine shots total, with six being on goal. SMU also had two more corner kicks. The Mustangs had more chances in the box to score than the Owls did, but couldn’t convert on more than one.

Temple’s offense became more aggressive in the last few minutes of the second half. With 10 minutes to go, the Owls almost chipped a goal over SMU keeper Cole Johnson. Only a couple of minutes later, forward Sean Karani drew a penalty, which his teammate Amir Cohen calmly drilled into the bottom right corner. It seemed like the game was lost. With a little less than five minutes to go, Temple had tipped the balance of the game in its favor.

But the Mustang’s season-long perseverance came to a head at the 87th minute, when Skage Simonsen scored a goal off a rebound from a cross sent by Terwege. After finishing into the left corner, the Mustangs were overjoyed.

While SMU did lose the game on a golden goal in extra time, secured by a point-blank finish by Temple after a rebound from a cross, Hudson wasn’t disappointed. He acknowledged the team’s high level of play, stating that despite “dropping the game” and “creating chances to win”, the Mustangs had an overall great performance. He reflected on how the journey, culture, and feel of the team are more important than the outcome.

SMU has won the conference tournaments in 17′, 18′, and 19′. In 2019, the most recent full year, the team entered the tournament with a 5-1-1 record and sat at the top of the AAC. This season things looked much different: a 5-5 record and finishing as a four seed.

“It’s a pretty special group” Hudson stated. While “this year hasn’t gone the way we [SMU] wanted it to”, and the team has “fallen short” of its potential, the coach is proud of the whole team and “appreciates everything they’ve done” for the school and the program.”