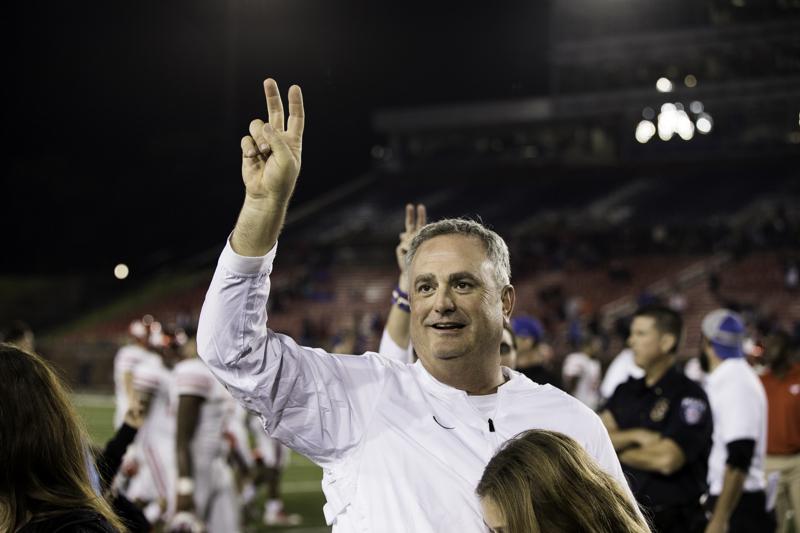 Sonny Dykes and the Mustangs are off to a hot start after winning their first two games of the 2019 season. SMU dominated on both sides of the ball in their home opener against North Texas with a final score of 47-28 last Saturday. Dykes brought along grad-transfer quarterback Shane Buechele for his weekly radio show at Ozona Bar and Grill on Monday night to discuss the victory and next week’s matchup versus Texas State.

The crowd was particularly energetic this week as they hope for the Mustangs’ first 3-0 start since 1984. With Buechele in attendance, coach Dykes had a few words to say about his performance, along with the offense as a whole. They came out quick with three unanswered touchdowns in the first quarter. Buechele was calm in the pocket and outperformed his week-one self with three touchdowns and almost 300 yards in the air.

“Really from day one, it’s been such a smooth transition for him. Three days into fall camp, it seemed like he’d been here forever. He didn’t go through spring football,” Dykes said. “Typically spring football is just so important for your starting quarterback because they learn so much about timing and spacing and rhythm and how receivers run routes and where guys like the ball…What he does so well is never forces balls and he doesn’t take sacks.”

Xavier Jones and Patrick Nelson were both named AAC Players of the Week after their impressive performances against North Texas. Jones leads the nation with rushing touchdowns after two consecutive games with three touchdowns each. Nelson secured seven tackles and intercepted North Texas quarterback Mason Fine.

“Pat played great. I mean that was a heck of a play on the interception. He read the wheel route the whole way and really anticipated the throw,” Dykes said. “Pat played like he was supposed to, really. He ran around, made a couple tackles in the backfield, hit the quarterback a couple of times…that’s what Pat can do. He’s one of those guys that has a knack for being in the right place and making big plays.”

SMU debuted a new uniform on Saturday to embrace their identity as Dallas’ team. The helmets were painted with a triple-D interlocked with the Mustang logo to symbolize the unity between the city of Dallas and the university. Stripes on their pants, jerseys and helmets were included as similarities to the timeless Dallas Cowboy’s uniforms. The word “Dallas” was pasted across their chests to pay homage to SMU alumni, AFL founder Lamar Hunt and the Dallas Texans.

Another week, another successful It’s Always Sonny on the Hilltop radio show! One lucky fan is leaving with an autographed helmet!
Join us @ozonagrill again next Monday at 7pm!#PonyUpDallas pic.twitter.com/NOdWKXweYg

“The uniforms kind of fit into that whole marketing campaign (Born and Raised). Number one, when you’re red and blue, it’s hard to mess that up,” Dykes said. “I’m a little bit of a traditionalist when it comes to uniforms. I’ve said it before. I kind of grew up watching SMU, cheering for SMU and I love those old uniforms…That’s why we try to have more of a classic approach when it comes to wearing uniforms: just wear white on the road and blue at home. But this was an opportunity where I think we did things a little bit different.”

Dykes mentioned he surprised his players with the uniforms just minutes before leaving their hotel for Ford Stadium. He said that they won’t always be wearing the Dallas Born and Raised inspired jerseys, but for games that hit a little closer to home, like TCU or Houston, fans can expect the new look.

Dykes will face an old colleague against Texas State this weekend as coach Jake Spavital will lead the Bobcats into Dallas. Spavital and Dykes were both on the coaching staff for the California Golden Bears in 2016 and will meet again this year as opponents.

The Bobcats fell short of victory in their first two games against Texas A&M and Wyoming, but Dykes believes they are a better team than their final scores have shown. The Mustangs host the Bobcats Saturday night at 6 p.m. in Ford Stadium.