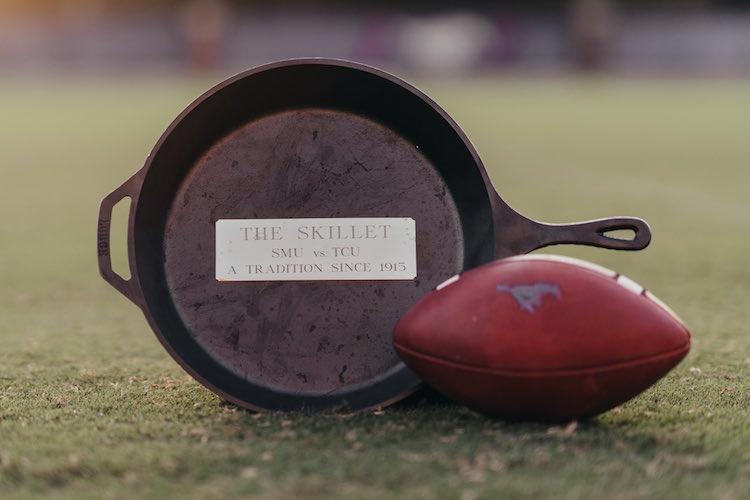 The Mustangs are 4-0 for the first time since the “Pony Express” era after their historic 41- 38 win over TCU in the battle for the Iron Skillet.

The Mustangs dominated the first half, going into the locker room 31-17. The second half was little bit tighter, and the Horned Frogs nearly took the lead with 2:35 left. Thanks to a defensive stop on 4th and 3, SMU took the Iron Skillet back to Dallas for the first time since 2011.

Head coach Sonny Dykes knew that the game would be close, despite his teams lead at halftime.

The win in Fort Worth was a team effort. Dykes mentioned multiple players who stood out to him, including wide receiver Reggie Roberson Jr., cornerback Ar’mani Johnson and offensive lineman Alan Ali. Beating TCU, then ranked No. 25 in the nation, gave these players more exposure on sports broadcasts.

“The first couple of weeks I was little ticked off because we aren’t on any of the highlight shows,” Dykes said. “We have some really, really good football players…they deserve people to take notice of them.”

The Mustangs have been playing well on both sides of the ball. They currently lead the conference in defensive sacks, and also in fewest sacks allowed. They are 18th in the nation on third down conversions, compared to 118th last season. Part of the increase in production from last season can be attributed to Dykes personal adjustment to being a head coach.

“Year two is always a lot better than year one,” Dykes said. “The guys learn not only what to do, but how to do it with you.”

The undefeated season has certainly been a boost in SMU’s recruiting efforts. Dykes said that he has been getting messages from players from other schools who are interested in coming to SMU.

“There’s this interest in coming to our program,” Dykes said.

Part of that interest comes from the success that other transfer players have been having under Dykes. Roberson and quarterback Shane Buechele have both had stellar seasons, helping push the Mustangs to all four of their wins.

The great start has also led to an increase in fan spirit and excitement about the Mustangs. The radio show, which takes place near campus at Ozona Grill and Bar, was standing-room only on Monday night.

Standing room only at Ozona’s tonight! Crowd is live! Oh, and I got a photo with this guy too… pic.twitter.com/JmVzebNPxg

The packed crowd was fired up to hear Dykes talk and to congratulate him on the win. Dykes said that he hopes this enthusiasm remains for the remaining home games.

“We get our energy from our fans,” Dykes said.

That energy has transferred to the players, as they have begun to develop more pride in their team. With each win the Mustangs sign the school fight song in the locker room to celebrate.

“It’s just something I have always done,” Dykes said. “Our players look forward to it, and they take a lot of pride in it.”

Dykes joked that the tradition has been around for a while, but has been in the spotlight this year as the Mustangs have won every game.

“We did it last year. We just didn’t do it very often,” Dykes said.

While the win over cross-metroplex rival TCU was monumental for the team, they have already began the shift toward their game next weekend against American Athletic Conference rival the University of South Florida. This will be the Mustangs first conference game of the season.