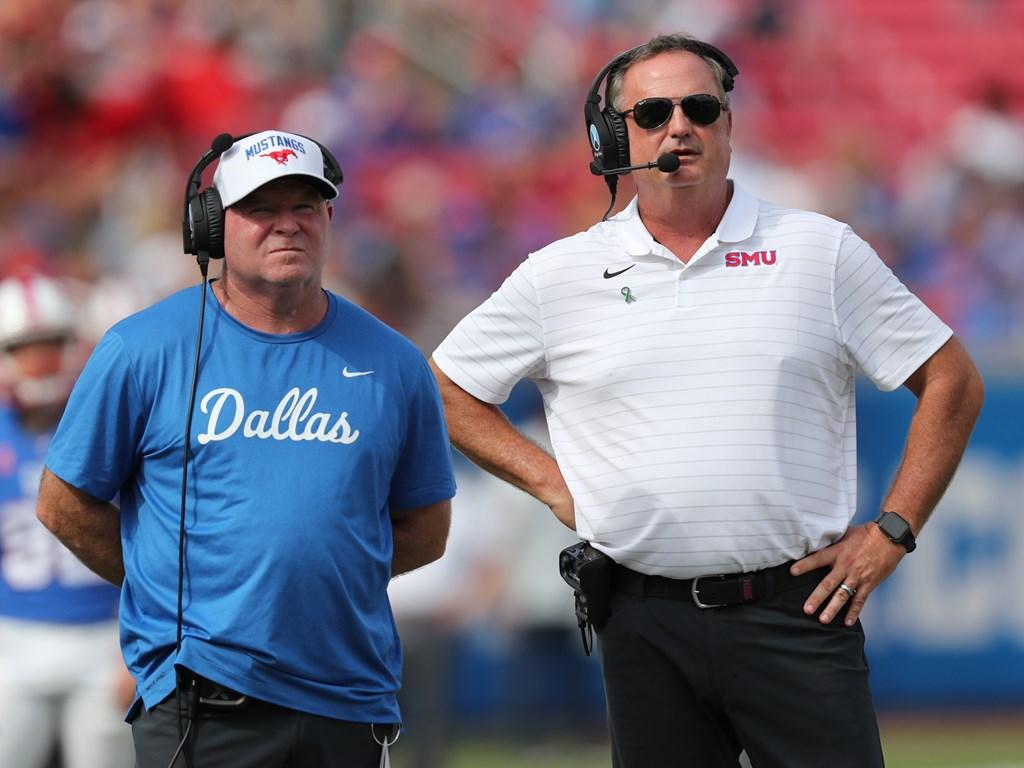 There is an understanding within SMU’s program that when Sonny Dykes walks off the field after one game this season, either after the bowl game or sometime before, it will be his last as SMU’s head coach.

Multiple sources close to the team said there is a growing belief Dykes will leave for a Power Five job after four seasons at SMU, though it is not set in stone.

The sentiment falls in line with what the Fort Worth Star-Telegram reported last week.

The sources said the key point around the potential departure is SMU remaining in the American Athletic Conference – a conference which has struggled for national relevance and will become weaker after its top three teams depart for the Big 12 by 2024.

SMU staying the American will mean the program will struggle to be in the national conversation, regardless of how much it wins, and the program might be close to its ceiling when it comes to success while in the AAC, sources said.

The College Football Playoff rankings, which debuted this week, parallels these concerns. Cincinnati, which has won 28 of its last 32 games and is 8-0 this season, was ranked No. 6, four spots lower than the Associated Press Poll and outside the playoff landscape. It sent a clear signal about how the committee views conferences like the American and about any potential pathway to the playoff for SMU, according to those sources.

In the last week, two other major coaching dominos fell that continued to give steam to the notion Dykes would be gone. TCU parted ways with Gary Patterson after nearly 22 years as the head coach. Athletic Director Jeremiah Donati said he would like to replace Patterson with a candidate with “head coaching experience.”

Dykes has a relationship with TCU and Patterson. After he was fired from Cal in 2017, Patterson hired Dykes to be an offensive analyst for the Horned Frogs before he took the job at SMU. Dykes declined to speak about TCU this week.

“I don’t know where some of this stuff comes from,” Dykes said Tuesday. “People just kind of write things and assume things. It’s interesting to me that it happens. I guess that’s part of this time of the year.”

Dykes’ name was already linked to the Texas Tech job openings before this week. Multiple reports have said Dykes is near the top of Tech’s list to replace Matt Wells.

The other name that was also mentioned for Texas Tech, UTSA’s Jeff Traylor, signed a 10-year extension with the Conference-USA school, clearing more room for Dykes.

Dykes also declined to comment about the Texas Tech job opening at a media availability. His father, Spike Dykes, was the head coach in Lubbock for 13 seasons. Sonny Dykes was an assistant in Lubbock from 2000-06. He went to Lubbock Coronado High School.

“I’m not ever going to talk about other jobs,” he said Tuesday. “I just don’t think it’s fair to anybody.”

Sports Illustrated and The Dallas Morning News reported that Dykes has a contract extension with SMU on the table that he has not signed. The offer would make him one of the highest-paid Group of Five coaches in the country and have a larger pool of money for assistants.

Sources, however, acknowledged Dykes’ candidacy for these jobs will be affected by the team’s performance the rest of the year. SMU, after losing to Houston last week, will play Memphis on Saturday. It will be followed by UCF and Cincinnati in the two succeeding weeks.

6 thoughts on “Sources: Growing belief Dykes will leave at the end of the year”